Waterways Council, Inc. (WCI) is the national public policy organization that advocates for a modern, efficient inland waterways system. Abiding by our mission has meant success over our 17-year history. In 2020, WCI’s top priority is to conform the cost-share for Inland Waterways Trust Fund (IWTF)-financed construction projects to require 25% of the project cost be derived from the IWTF and the remaining 75% from General Revenues.

The policy vehicle for this adjustment is the Water Resources Development Act (WRDA), which the Senate this year is calling the America’s Water Infrastructure Act (AWIA) of 2020. This cost-share adjustment tracks the same formula used for the construction of the majority of the nation’s coastal ports (with depths between 20-50 feet) that was changed in WRDA 2016 legislation.

In fact, on May 7, the Senate Environment & Public Works (EPW) Committee marked up and passed by a 21-0 roll call the AWIA (WRDA). The EPW Committee’s bill, reported to the Senate, included WCI’s priority to adjust the cost-share for construction and major rehabilitation of inland waterways projects. The Senate EPW Committee’s provision to adjust the cost-share from 50% from Inland Waterways Trust Fund (IWTF)/50% General Revenues to 35% IWTF/65% General Revenues (in Section 1069 of the bill) is a significant step toward ensuring inland waterways construction and major rehabilitation projects advance more efficiently.

In the House in early May, the Transportation & Infrastructure (T&I) Committee received Members’ WRDA priorities on May 1 and is starting the process of drafting its bill. House markup of the bill is expected sometime in June or July. WCI continues to urge that the House include the 75%/25% cost-share adjustment. An April “Dear Colleague” letter led by Rep. Conor Lamb (D-PA) and Rep. Brian Babin (R-TX) sent to the House T&I Committee garnered 78 signatures in support of this cost-share provision. Several other Members of the House have indicated their individual requests to T&I included this cost-share provision.

Beyond WCI’s focus on the cost-share adjustment in WRDA, annual appropriations remain a top priority. In 2020, we are focused on Fiscal Year (FY) 2021 appropriations with a goal to provide for the construction of inland waterways modernization projects at the maximum funding amount supportable by expected revenues into the IWTF. WCI also urges an increase in overall Corps of Engineers’ Civil Works Program Operations & Maintenance (O&M) funding (FY20 funding for O&M was $3.79 billion).

In February, the U.S. Army Corps of Engineers released its FY20 work plan, which allocates funds provided in the FY20 Energy & Water Development Appropriations bill toward its civil works mission.

Included in the FY20 work plan was $4.5 million for the Navigation and Ecosystem Sustainability Program (NESP) that spans the Upper Mississippi River and the Illinois Waterway System across Illinois, Iowa, Minnesota, Missouri and Wisconsin. This funding is for the continuation of the preconstruction engineering and design (PED) phase of the program that both modernizes locks and addresses ecosystem and sustainability ($3 million in PED funds were approved for navigation and $1.5 million for the environmental restoration component of NESP). This is the first allocation of PED funds for NESP since 2012.

Also of note, $85.35 million was allocated to initiate construction of the deepening of the Mississippi River Ship Channel, Gulf to Baton Rouge (Louisiana) to 50 feet.

And besides NESP, the Investigations account will also fund these projects of particular importance to WCI:

WCI continues to oppose additional tolling, lockage fees or adverse charges for the users of the inland waterways system imposed by Congress or the Administration. As a reminder, in 2014 inland waterways commercial users, led by WCI, successfully advocated to raise its diesel fuel tax from 20-cents-per gallon to 29-cents-per-gallon, a 45% increase, as a way to increase investment in the IWTF for priority navigation projects. Currently, inland waterways operators pay the highest fuel tax of any surface mode of transportation.

In 2020, WCI remains focused on the health and safety of its members during COVID-19. At press time, the nation’s lock and dams remain operational and commerce continues to move on the inland system, in spite of the virus’s havoc throughout the country.

Mother Nature is always a factor that must be considered and high water remains a challenge on the inland waterways system, but the Corps of Engineers is doing a masterful job of deploying dredges to hot spots to ensure channels remain open and navigable.

Ahead this year, the inland waterways industry and its shippers prepare for consolidated maintenance closures of the Illinois Waterway. On April 20, the Corps’ Rock Island District received the remainder of the funding necessary to execute the project and at press time, the project remains on track with the original schedule for five-lock closures beginning in early July through September. Neither the Corps nor its contractors anticipate delays due to the COVID-19 pandemic, but they remain vigilant to any potential changes.

Waterways transportation of key commodities underpins a robust American economy as our nation recovers from the impacts of COVID-19. These cargoes are moved on the inland waterways in the safest, most energy efficient, traffic congestion relieving, environmentally sound way.

While the future currently may seem somewhat uncertain, WCI will continue to advocate for increased reliability in inland waterways infrastructure that provides our nation a clear channel toward resilience and prosperity. 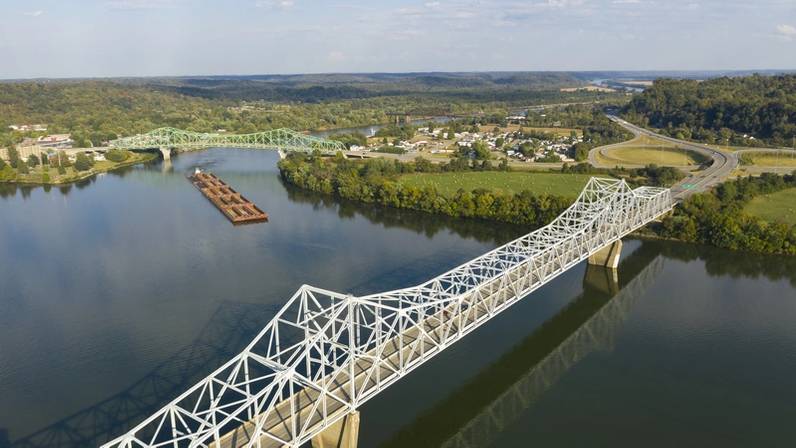 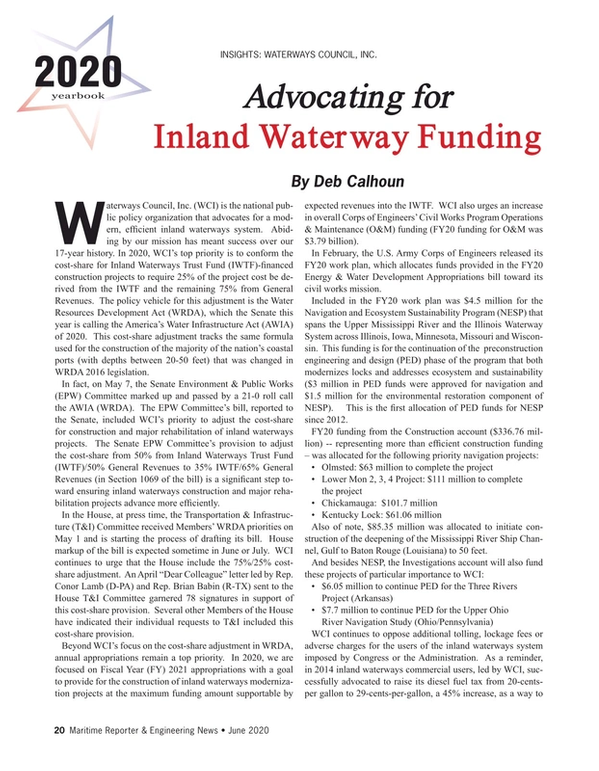 Other stories from June 2020 issue