Is Diesel-Electric Propulsion the System for You?

For the right types of vessels, diesel- electric propulsion offers a myriad of advantages over other systems — among them are: better performance, greater cargo capacity, lower costs, and longer equipment life. Although other considerations can enter into play, what constitutes the "right type of vessel" has largely to do with the difference between the power required for main propulsion versus what is required for maneuvering: the bigger the disparity, the larger the potential reward.

Supply boats, tugboats, research vessels, drill ships, gaming vessels, and in particular, vessels performing dynamic positioning represent prime candidates for a system, which has many experts wondering why it is not employed more extensively. "Diesel-electric has powered the petroleum industry's on- and offshore drilling rigs for decades, is used exclusively in railroad locomotion, and has long been favored by the U.S.

Synonymous with diesel-electric propulsion, SCR drive takes its name from the silicon-controlled rectifiers — SCR units — at the heart of the system.

The switchboard distributes ac to the SCRs, which convert it to variable- voltage direct current for the vessel's propulsion motors, bowthrusters, tow winches, and sundry dc equipment.

Ken Robbins, president of Marine Propulsion Inc., Hammond, La., relates the arrangement to an electrical power station for a small community. "You can draw as much power out of it as you put into it," he says, "and can send that power wherever it's needed." The advantages of diesel-electric drive impact three interrelated areas of prime consequence to vessel owners: performance, operating cost, and payload capacity.

Performance-related benefits focus around the superiority of dc traction motors for high-torque maneuvering and dynamic positioning. The motors are capable of providing full torque at all times, even at zero rpm, and furnish dynamic (or regenerative) braking capability.

Propeller reversals happen within five to 10 seconds by reversing the polarity of the dc power, thus eliminating the need for a reverse gear.

With dc traction motors rpm can be controlled all the way to zero, whereas diesel rpm cannot be reduced below idle speed. Moreover, dc motors are indifferent to extended periods of lightly loaded low-speed operation — a condition hostile to direct-diesel fuel economy and engine life.

During high-speed operation, a dc motor can exceed rated rpm by 50 to 100 percent — safely and harmlessly — simply by reducing the field current. Horsepower holds steady at maximum output, although torque output above rated rpm decreases proportionately as revolutions- per-minute climb.

Other diesel-electric operating benefits help lower the vessel's overall cost of operation. The engines, for instance, never have to lug or strain against the governor; they're always humming along at rated rpm under 60 percent load or more — a condition promoting component longevity and maintenance savings.

The use of engine-generator sets permits adding-on or shutting-down engines as demand fluctuates, ensuring the efficient use of available horsepower, economical fuel consumption, and minimized wear.

If you need less, disconnect a compressor or two." With horsepower requirements tied to electrical generation rather than propelling and maneuvering the vessel, smaller diesels can be specified. "Maintaining top vessel speed with two large engines running at 60-percent load is not nearly as cost-effective as running two smaller engines at full load," Robbins says. "Yet that's precisely what can happen with direct-diesel, should maneuvering performance dictate engine size." The cost-efficiencies with electric drive go even further. For example: • No dedicated engine (and associated fuel-delivery, starting, cooling, lubricating, and exhaust equipment) for each driven load (thrusters, main screws, winches, pumps, etc.) — just standard, direct-coupled dc motors powered from the ship's service generators; • no clutches or reverse gearing to maintain or repair.

Additionally, the engine-generator sets come skid-mounted for level installation on resilient pads that minimize noise and vibration and make for a quieter vessel.

There's no aligning engines with gearing, since there's no gearing in the first place, and thus no mulling over tilt angles when complying with American Bureau of Shipping (ABS) trim standards.

These latter benefits introduce the subject of design flexibility and how dieselelectric drive can favorably impact cargo space.

"Diesel-electric drive conveys extraordinary freedom of configuration," says DeJong. "Because the engines and generators can go just about anywhere, you can place them forward and use their weight as trim ballast, creating more room for cargo aft." Forward placement also locates the engines close to the stacks, which shortens intake and exhaust plumbing. That lets the engines breathe, and therefore work, more easily, with less exhaust back-pressure to overcome.

Equivalent performance, because the propellers have full shaft horsepower on tap in all modes of operation. Fewer parts, because the system eliminates the valves, rams, and other hardware of CP hydraulics. Another advantage: multishaft maneuverability with only one engine running.

But that's not to suggest an either-or proposition. To the contrary, SCR-controlled dc motors can be. and have been, used to power CP propeller reduction gearing and virtually all other types of propulsion loads, from reduction gears with fixed pitch propellers to Z-drives to low-speed water jets and tunnel thrusters. The choice is a function of application. Which harks back to the original question of whether or not diesel-electric is the system for you.

Therefore, do consider SCR drive: • When propulsive power constitutes a small percentage of the total required for maneuvering, positioning, pumping, lighting, and so on: • when maximum torque and responsive control are necessary for dynamic positioning and bollard pull conditions; • when maneuvering agility, especially with rapid propeller reversals, is of paramount importance; and • when physical criteria either preclude direct-diesel or render it cost-prohibitive - SWATH vessels with hulls or struts of inadequate size; sternwheelers and other vessels requiring forward-positioned machinery to avoid trim problems; configurations that would necessitate more than one machinery space to accommodate direct-diesel, with a corresponding multiplication of cooling, intake, exhaust, ventilation, and control provisions.

And do consider it in spite of any concerns you may have about harmonic distortion.

Some vessel operators fear that, with a large electric plant, harmonic dis- tortion reflected on the ac line could cause computers, navigating equipment and other sensitive electronic devices to malfunction. As Robbins points out, "It just isn't a problem. The potentially adverse effects of harmonic distortion are easily eliminated at the design stage.

The simplest and most economical method is to apply harmonic filters to the ship's sensitive equipment." By connecting filters to these sensitive loads, instead of to the source, much less filtering is required to neutralize harmonic distortion.

As for the singular "don't": Do not consider an SCR drive system when main propulsion, particularly under consistent loads for extended periods, constitutes 80 percent or more of the total power demand. Only rarely will such applications gain much benefit from diesel-electric. 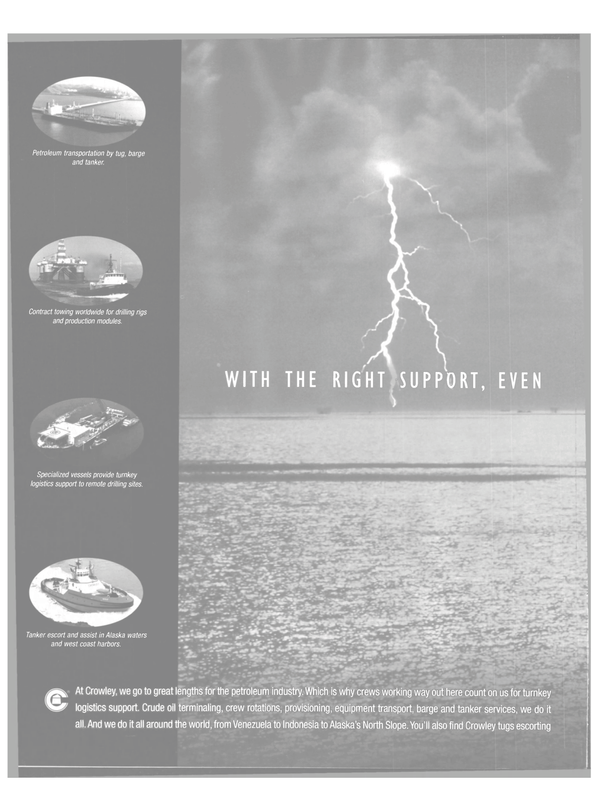 Read Is Diesel-Electric Propulsion the System for You? in Pdf, Flash or Html5 edition of April 2000 Maritime Reporter

Other stories from April 2000 issue