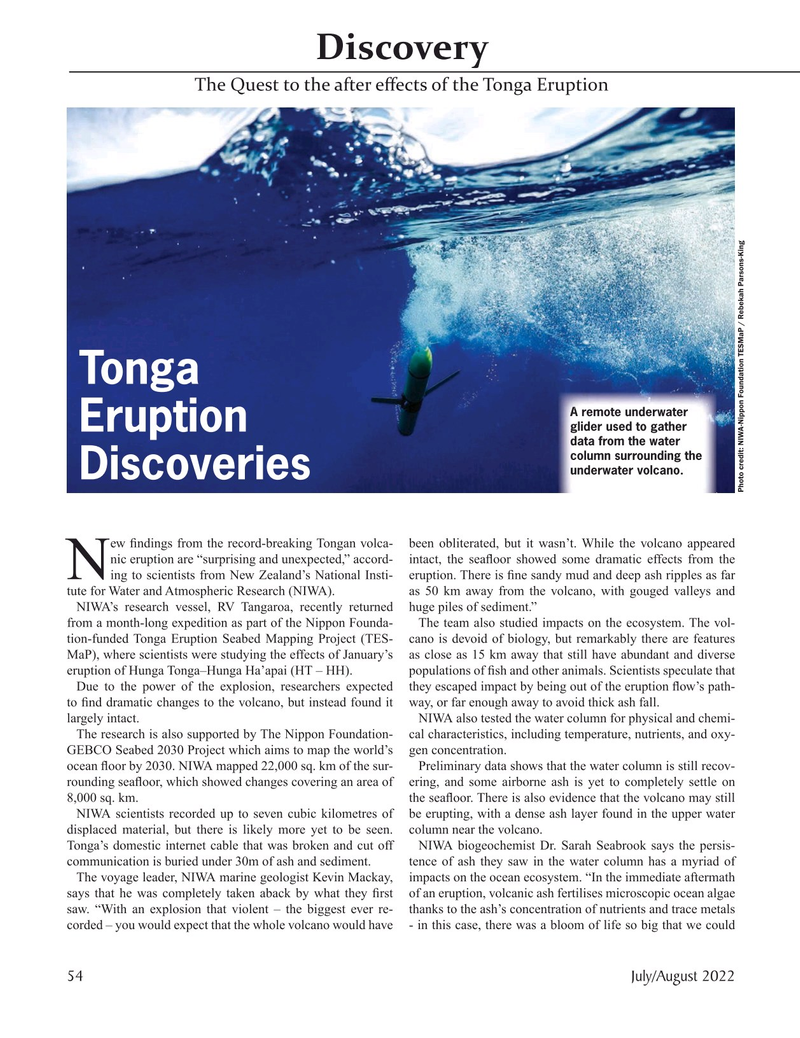 The Quest to the after e? ects of the Tonga Eruption

Eruption d data from the water c column surrounding the u underwater volcano.

Photo credit: NIWA-Nippon Foundation TESMaP / Rebekah Parsons-King ew ? ndings from the record-breaking Tongan volca- been obliterated, but it wasn’t. While the volcano appeared nic eruption are “surprising and unexpected,” accord- intact, the sea? oor showed some dramatic effects from the

Ning to scientists from New Zealand’s National Insti- eruption. There is ? ne sandy mud and deep ash ripples as far tute for Water and Atmospheric Research (NIWA). as 50 km away from the volcano, with gouged valleys and

NIWA’s research vessel, RV Tangaroa, recently returned huge piles of sediment.” from a month-long expedition as part of the Nippon Founda- The team also studied impacts on the ecosystem. The vol- tion-funded Tonga Eruption Seabed Mapping Project (TES- cano is devoid of biology, but remarkably there are features

MaP), where scientists were studying the effects of January’s as close as 15 km away that still have abundant and diverse eruption of Hunga Tonga–Hunga Ha’apai (HT – HH). populations of ? sh and other animals. Scientists speculate that

Due to the power of the explosion, researchers expected they escaped impact by being out of the eruption ? ow’s path- to ? nd dramatic changes to the volcano, but instead found it way, or far enough away to avoid thick ash fall.

The research is also supported by The Nippon Foundation- cal characteristics, including temperature, nutrients, and oxy-

GEBCO Seabed 2030 Project which aims to map the world’s gen concentration. ocean ? oor by 2030. NIWA mapped 22,000 sq. km of the sur- Preliminary data shows that the water column is still recov- rounding sea? oor, which showed changes covering an area of ering, and some airborne ash is yet to completely settle on 8,000 sq. km. the sea? oor. There is also evidence that the volcano may still

NIWA scientists recorded up to seven cubic kilometres of be erupting, with a dense ash layer found in the upper water displaced material, but there is likely more yet to be seen. column near the volcano.

Tonga’s domestic internet cable that was broken and cut off NIWA biogeochemist Dr. Sarah Seabrook says the persis- communication is buried under 30m of ash and sediment. tence of ash they saw in the water column has a myriad of

The voyage leader, NIWA marine geologist Kevin Mackay, impacts on the ocean ecosystem. “In the immediate aftermath says that he was completely taken aback by what they ? rst of an eruption, volcanic ash fertilises microscopic ocean algae saw. “With an explosion that violent – the biggest ever re- thanks to the ash’s concentration of nutrients and trace metals corded – you would expect that the whole volcano would have - in this case, there was a bloom of life so big that we could 54 July/August 2022