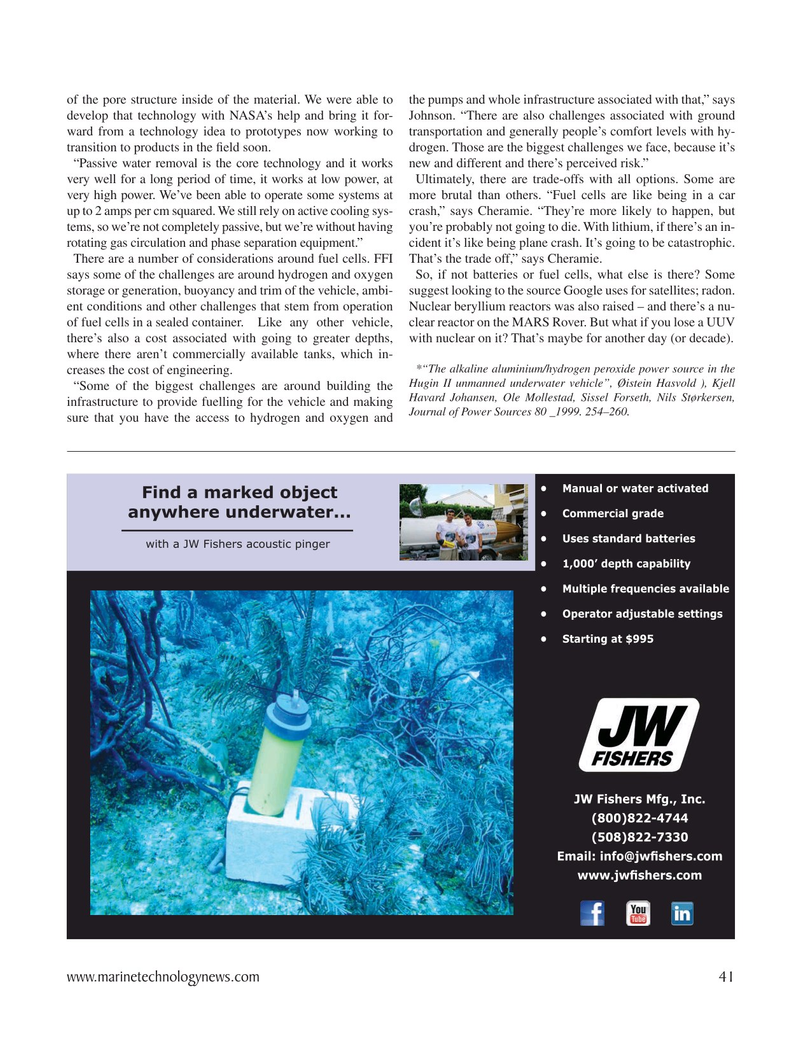 of the pore structure inside of the material. We were able to the pumps and whole infrastructure associated with that,” says develop that technology with NASA’s help and bring it for- Johnson. “There are also challenges associated with ground ward from a technology idea to prototypes now working to transportation and generally people’s comfort levels with hy- transition to products in the ? eld soon. drogen. Those are the biggest challenges we face, because it’s “Passive water removal is the core technology and it works new and different and there’s perceived risk.” very well for a long period of time, it works at low power, at Ultimately, there are trade-offs with all options. Some are very high power. We’ve been able to operate some systems at more brutal than others. “Fuel cells are like being in a car up to 2 amps per cm squared. We still rely on active cooling sys- crash,” says Cheramie. “They’re more likely to happen, but tems, so we’re not completely passive, but we’re without having you’re probably not going to die. With lithium, if there’s an in- rotating gas circulation and phase separation equipment.” cident it’s like being plane crash. It’s going to be catastrophic.

There are a number of considerations around fuel cells. FFI That’s the trade off,” says Cheramie.

says some of the challenges are around hydrogen and oxygen So, if not batteries or fuel cells, what else is there? Some storage or generation, buoyancy and trim of the vehicle, ambi- suggest looking to the source Google uses for satellites; radon. ent conditions and other challenges that stem from operation Nuclear beryllium reactors was also raised – and there’s a nu- of fuel cells in a sealed container. Like any other vehicle, clear reactor on the MARS Rover. But what if you lose a UUV there’s also a cost associated with going to greater depths, with nuclear on it? That’s maybe for another day (or decade).

where there aren’t commercially available tanks, which in- *“The alkaline aluminium/hydrogen peroxide power source in the creases the cost of engineering.

Hugin II unmanned underwater vehicle”, Øistein Hasvold ), Kjell “Some of the biggest challenges are around building the

sure that you have the access to hydrogen and oxygen and ? Manual or water activated