Subsea Robots in the Splash Zone

From their base deep within a former World War II U-boat pen, Norwegian outfit, OceanTech, is developing a set of robot tools that cling to offshore structures in order to effect inspection, maintenance and repair, or IMR. Old submarine anchorages are now subsea testing and training sites, but the North Sea is still the target. Hundreds of aging platforms and subsea structures require IMR that’s too costly, complex or hazardous for divers or remotely operated vehicles, or ROVs.

As he walks us through Dora II, the original name of the U-boat pen,  OceanTech CEO, Berndt Schjetne, points to corners of the building stashed with rental tools custom-built for a range of past clients: a lift palette for the serpentine ROV, Eelume; a large splash-zone tool with its own crane for immersing probes into a platform jacket’s wave-lashed splashzone. “We use it as a kind of subsea workshop,” Schjetne says among the mostly dank recesses.

The former anchorages, from four to eight meters deep, are crammed with training platforms and testing equipment. IMR tools are in increasing demand, as offshore operators and their contractors look to extend field life and increase oil recovery. This is where OceanTech’s prototype, all-electric iCon inspection robot was tested for its ability to lower itself and its probes below the splashzone to effect subsea inspections of … you name it: pipe, riser, concrete or jacket. The iCon is the latest in a series of about five OceanTech access tools that are either joystick controlled or semi-autonomous.

Crucially, OceanTech’s splash zone tools may be key, for some operators, to securing inspections and then certifications of platform integrity. 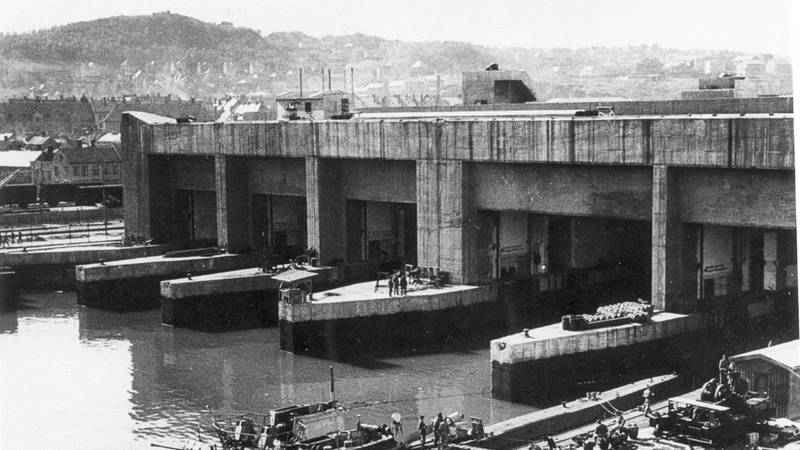 Subsea test center (Then): In WWII as a U-boat pen, and now as OceanTech’s subsea training, test and fabrication center.
CREDIT: The author/OceanTech 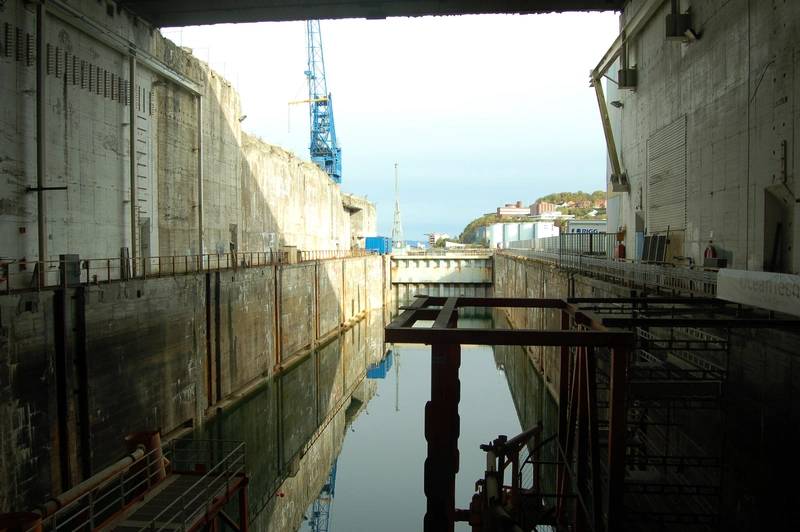 Subsea test center (Now): in WWII as a U-boat pen, and now as OceanTech’s subsea training, test and fabrication center.
CREDIT: The author/OceanTech

Splash zone climber
Judging by a DNV GL study, the surf is a neglected area of safety: “In areas with harsh environments, such as in the North Sea, it is common to assume that structural details located below or in the splash zone are not accessible for inspection and repair.” The splash zone is defined in DNVGL standard, ST-0126.

“Inspection of structures in the splash zone and below water focuses in addition on the corrosion protection systems (steel wall thickness, anodes, coating, etc.), marine growth and scour protection.” Yet, OceanTech’s tools do that hazardous work. The iCon robot addresses these and subsea structures as well, starting with risers that could lose buoyancy if fouled by marine life: they can also develop tiny leaks, as can infield pipelines accessible via an iCon-equipped ROV.

“Climbing down” a platform and into those difficult areas is sort of natural for OceanTech. The company’s origins lie in putting up the transmission lines that crisscross Norway’s fjords. In 2009, they began bringing the tech and techniques offshore. Masts and platforms are structurally similar.
“We made climbing our trade,” Schjetne says. “We saw that there was a need for working just below the surface. Divers couldn’t work there. No one could work in the splash zone.” Work between 2007 to 2019 created a line of ready-to-go access tools, with five or six concepts sent recently on missions to Azerbaijan, the North Sea and the Gulf of Mexico.

The VAT, or vertical access tool, is at the core of the robotized line. This climber can travel all the way from the splash zone to the bottom along risers and production lines using its robotic arm or arms. Tools attached at its back are accessed by a second robotic arm. Operators in a control cabin topside uses screens and joysticks to manipulate and gain all-round awareness. When developed in 2012, the system quickly won work in the Dutch sector and now forms the basis for future deployments of the iCon. 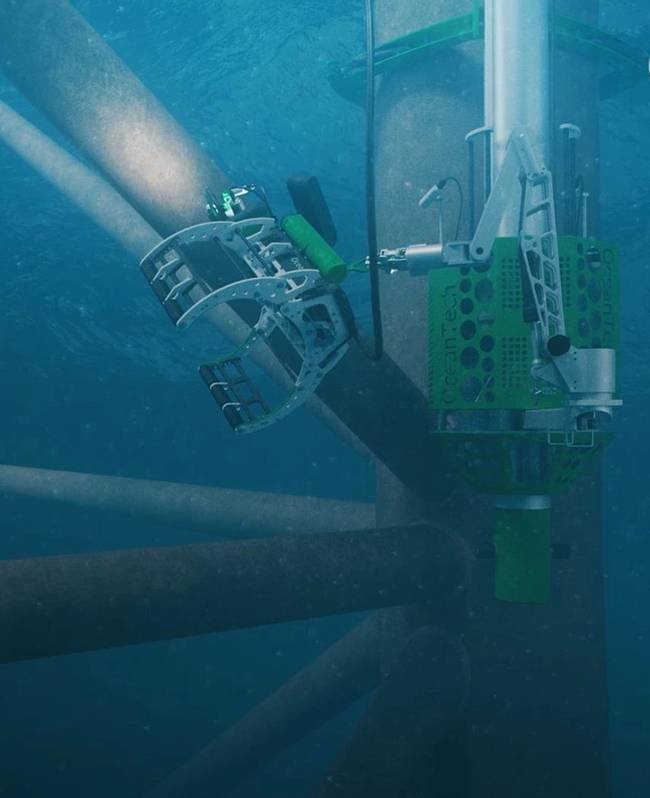 Development hasn’t been all straightforward. “Perfection”, OceanTech learned, can be a setback. An access tolo that was 20 meters long and cost EUR 2 million to develop epitomized the company’s early eagerness to create the perfect IMR Swiss Army Knife. “We’ve never used it. It was too good. Too big. Too perfect. Too heavy to install. We learned a lot. We made smaller tools.”

So, a two-meter-long arm for inspection and cleaning was devised. It can inspect grout work on wind installations or clear marine fouling on aquaculture pens. “We believe it can be transferred to other industries, but right now it’s done 99 percent (of its work) for oil and gas.” Industry pilots paid for its development, and now it does expert cutting, inspection, cleaning, “Whatever you need to do underwater. We do everything from the platform on down. We don’t need any support vessels that use a lot of fuel. The important thing is we don’t need any divers in the water. That’s the HSE aspect and the cost aspect.”

The smaller robot splashzone tool won work from the start. Jobs were unusual for being in areas that looked easily accessible but were, in fact, death traps. After the bends and being dragged around on the ocean floor in their habitat, North Sea saturation divers’ No. 1 fear was getting tangled up around jacket legs or zapping themselves by touching their electric wands to a structure before they were ready, something could help ensure happened.

A recent Australian work order to place giant clamps in 16 m of water illustrated how a robot clinging to a structure was superior to exposing a diver to pummeling waves. “We were supposed to work in behind (a massive structure). So, we made an access tool for the subsea clamp installation that went down to 23 m with these robotic arms to install subsea clamps on (a stretch of pipe),” Schjetne recalls.
The Aussie customer had planned to do the work with divers but called a stop after seeing the risks. “They didn’t do the work. Work in those zones was difficult but needed to be done.”

More IMR
OceanTech was able to engineer an automated solution and redesigned the repair clamps for robotic arms rather than for divers. “It was a minor cost in the overall picture,” he recalls, adding, “We also rigged up pipe behind hard-to-access (I and J tubes). It would have been an extremely dangerous place for divers to operate,” Schjetne says. At most, divers have a day or two in which to work. The robot arms’ weather windows can last 30 days or a whole season.

The industry seems to agree. As platforms age, Schjetne is getting more calls. While North Sea jobs have always been at-hand, OceanTech is also active in the Gulf of Mexico and has been lined-up for jobs in the sprawling UKCS decommissioning market. In contrast, much decommissioning in Norway has been put on hold by a wave of life-extension projects, where platforms and subsea structures are given new life — another niche market for the robot arms. “The equipment and the techniques can be used in many different ways,” says Schjetne. Meanwhile, ConocoPhillips, BP, Aker BP have all called in to inquire ahead of necessary inspections.
VAT vs ROV

It isn’t just steel these splash zone robots can repair. They can lock on by magnet or suction. They can bolt on to concrete, as in Russian and Norway. “We haven’t had any projects where we have had to say, “We cannot do this”.”

Watching the VAT lowered into place with the platform’s own crane before lowering the robot into the sea is like imagining a gremlin grip onto a structure.

“That’s what it’s all about. We attach to the structures. They’re fixed. They don’t flail around. That’s the main difference between our system and ROV operations (of this type).” The subsea unit with its tools launches from the VAT down into the water on a vertical access beam that can be 23 m long. An affixed robotic arm — with lights and cameras and tools needed for the work — seems a most efficient worker. “The tools are hung around like a tool belt. We don’t have to go back up for a new tool.”

“We can start in April and continue until September,” says OceanTech CFO, Geir Ingar Bjornsen. Schjetnes adds that with the normal diver window of a few days, 30 days of work “would take seven years”. So, major splash zone IMR has simply not been done. Now, inspecting nodes or changing out anodes can be part of a service package that includes yearly inspections or pre-project surveys.

Class’s DNV GL says there is in fact much to do at or just below the splash zone: apart from clearing marine growth and checking for leakage or corrosion, there are the effects of collisions and even earthquakes that warrant a closer look or, sometimes, a surface wrap.

The new iCon, with its sensor package, could be decisive in an operator’s bid to get a life-extension project approved. With new tools just out of development, it can inspect for fatigue cracks using alternating current field measurement, or ACFM.

A year ago, for the first time, a degree of autonomous movement turned the iCon Deepwater Inspection Tool into a splash zone tool able to effect repairs below the waterline. It’s crack-finding sensor — originally a handheld tool for divers — is affixed a probe carried by the robot and allowing it to trace subsea structures. It’s delivered by VAT. Using machine vision and automated thrusts in six directions, the tool follows a weld right around a structure, staying just millimeters form item being studied.

When a crack is detected, its length and the depth are seen topsides and another splash zone tool can be deployed. For deeper water, an ROV will be able to deploy the robot probe “in the future”: so, from 5 m to 12 m into the splashzone. Below that, you might prefer an ROV for the iCon.
OceanTech’s strength is an ability to create a unique access tool from which to deploy inspection robots in days or weeks. “If the tool fits, then we can go right out to the job.” The right clamp size for the pipe is all that’s needed to get an inspection robot fixed in place ahead of monitoring, reinforcing, grinding down or drilling the crack to an end point.

The iCon tool also creates “a digital twin”, and that has raised eyebrows among operators, including tech-savvy Equinor. The Norwegian operator is understood to be already piloting its use, precursor to coming contracts. 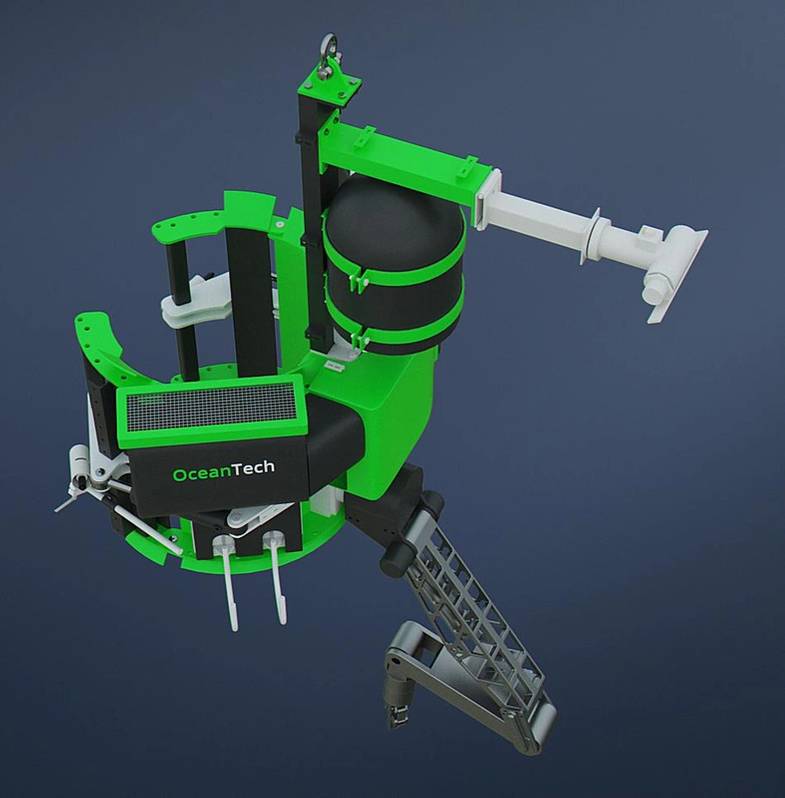 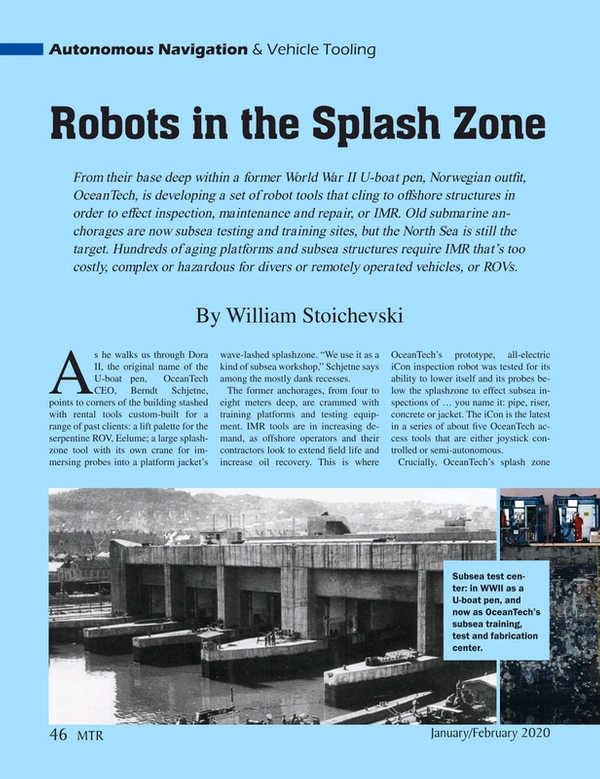 Other stories from January 2020 issue