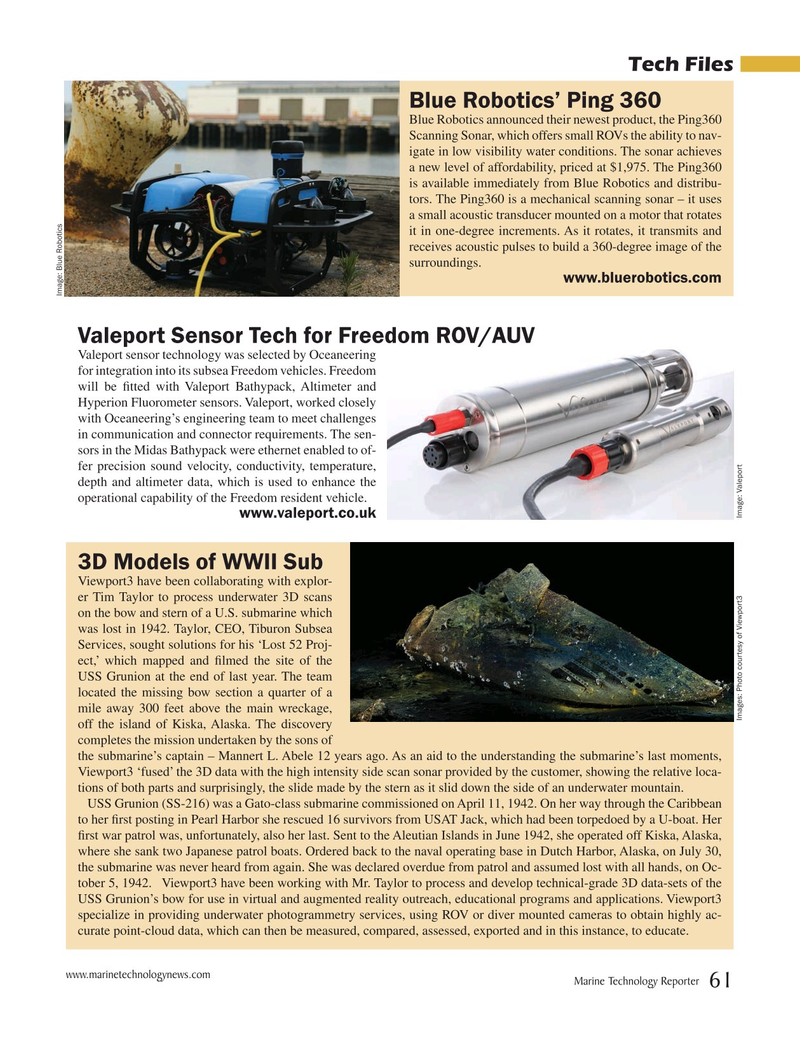 Scanning Sonar, which offers small ROVs the ability to nav- igate in low visibility water conditions. The sonar achieves a new level of affordability, priced at $1,975. The Ping360 is available immediately from Blue Robotics and distribu- tors. The Ping360 is a mechanical scanning sonar – it uses a small acoustic transducer mounted on a motor that rotates it in one-degree increments. As it rotates, it transmits and receives acoustic pulses to build a 360-degree image of the surroundings. www.bluerobotics.com

Valeport sensor technology was selected by Oceaneering for integration into its subsea Freedom vehicles. Freedom will be ? tted with Valeport Bathypack, Altimeter and

Hyperion Fluorometer sensors. Valeport, worked closely with Oceaneering’s engineering team to meet challenges in communication and connector requirements. The sen- sors in the Midas Bathypack were ethernet enabled to of- fer precision sound velocity, conductivity, temperature, depth and altimeter data, which is used to enhance the operational capability of the Freedom resident vehicle. www.valeport.co.uk 3D Models of WWII Sub

Viewport3 have been collaborating with explor- er Tim Taylor to process underwater 3D scans on the bow and stern of a U.S. submarine which was lost in 1942. Taylor, CEO, Tiburon Subsea

Services, sought solutions for his ‘Lost 52 Proj- ect,’ which mapped and ? lmed the site of the

USS Grunion at the end of last year. The team located the missing bow section a quarter of a mile away 300 feet above the main wreckage,

Images: Photo courtesy of Viewport3 Image: Valeport off the island of Kiska, Alaska. The discovery completes the mission undertaken by the sons of the submarine’s captain – Mannert L. Abele 12 years ago. As an aid to the understanding the submarine’s last moments,

Viewport3 ‘fused’ the 3D data with the high intensity side scan sonar provided by the customer, showing the relative loca- tions of both parts and surprisingly, the slide made by the stern as it slid down the side of an underwater mountain.

USS Grunion (SS-216) was a Gato-class submarine commissioned on April 11, 1942. On her way through the Caribbean to her ? rst posting in Pearl Harbor she rescued 16 survivors from USAT Jack, which had been torpedoed by a U-boat. Her ? rst war patrol was, unfortunately, also her last. Sent to the Aleutian Islands in June 1942, she operated off Kiska, Alaska, where she sank two Japanese patrol boats. Ordered back to the naval operating base in Dutch Harbor, Alaska, on July 30, the submarine was never heard from again. She was declared overdue from patrol and assumed lost with all hands, on Oc- tober 5, 1942. Viewport3 have been working with Mr. Taylor to process and develop technical-grade 3D data-sets of the

USS Grunion’s bow for use in virtual and augmented reality outreach, educational programs and applications. Viewport3 specialize in providing underwater photogrammetry services, using ROV or diver mounted cameras to obtain highly ac- curate point-cloud data, which can then be measured, compared, assessed, exported and in this instance, to educate.