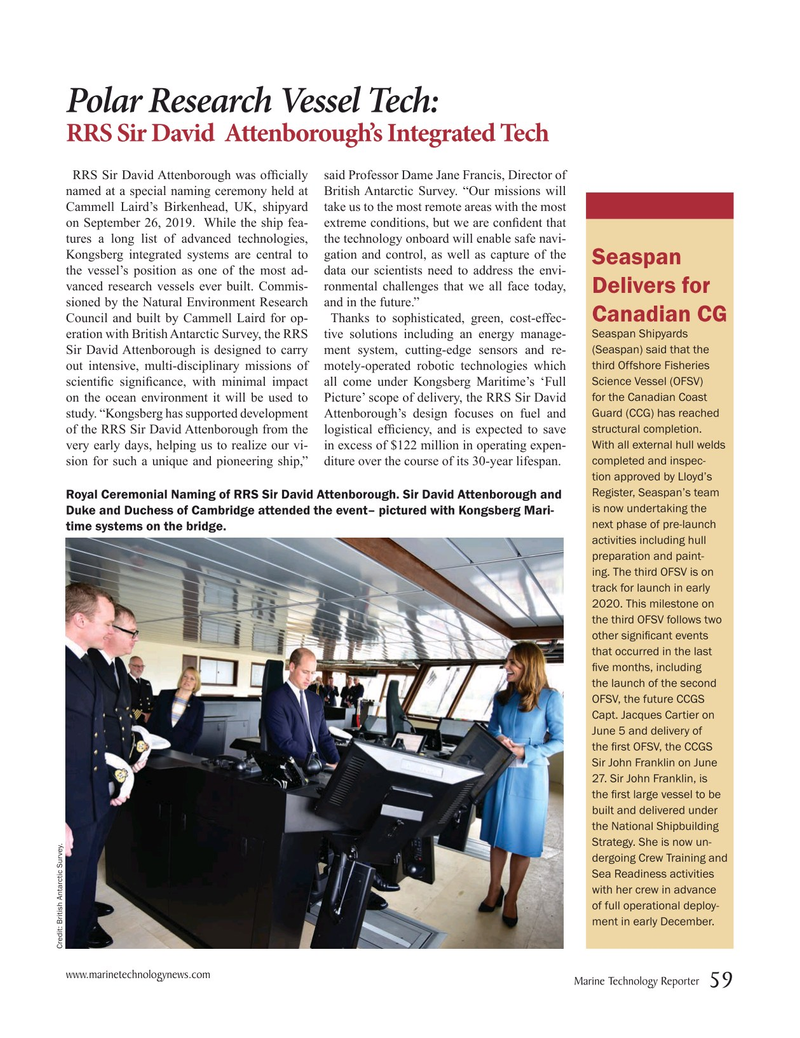 Cammell Laird’s Birkenhead, UK, shipyard take us to the most remote areas with the most on September 26, 2019. While the ship fea- extreme conditions, but we are con? dent that tures a long list of advanced technologies, the technology onboard will enable safe navi-

Kongsberg integrated systems are central to gation and control, as well as capture of the

Seaspan the vessel’s position as one of the most ad- data our scientists need to address the envi- vanced research vessels ever built. Commis- ronmental challenges that we all face today,

Delivers for sioned by the Natural Environment Research and in the future.”

Council and built by Cammell Laird for op- Thanks to sophisticated, green, cost-effec-

Seaspan Shipyards eration with British Antarctic Survey, the RRS tive solutions including an energy manage- (Seaspan) said that the

Science Vessel (OFSV) scienti? c signi? cance, with minimal impact all come under Kongsberg Maritime’s ‘Full for the Canadian Coast on the ocean environment it will be used to Picture’ scope of delivery, the RRS Sir David

Guard (CCG) has reached study. “Kongsberg has supported development Attenborough’s design focuses on fuel and structural completion. of the RRS Sir David Attenborough from the logistical ef? ciency, and is expected to save

With all external hull welds very early days, helping us to realize our vi- in excess of $122 million in operating expen- completed and inspec- sion for such a unique and pioneering ship,” diture over the course of its 30-year lifespan. tion approved by Lloyd’s

Duke and Duchess of Cambridge attended the event– pictured with Kongsberg Mari- next phase of pre-launch time systems on the bridge.

activities including hull preparation and paint- ing. The third OFSV is on track for launch in early 2020. This milestone on the third OFSV follows two other signi? cant events that occurred in the last ? ve months, including the launch of the second

June 5 and delivery of the ? rst OFSV, the CCGS

Strategy. She is now un- dergoing Crew Training and

Sea Readiness activities with her crew in advance of full operational deploy- ment in early December.