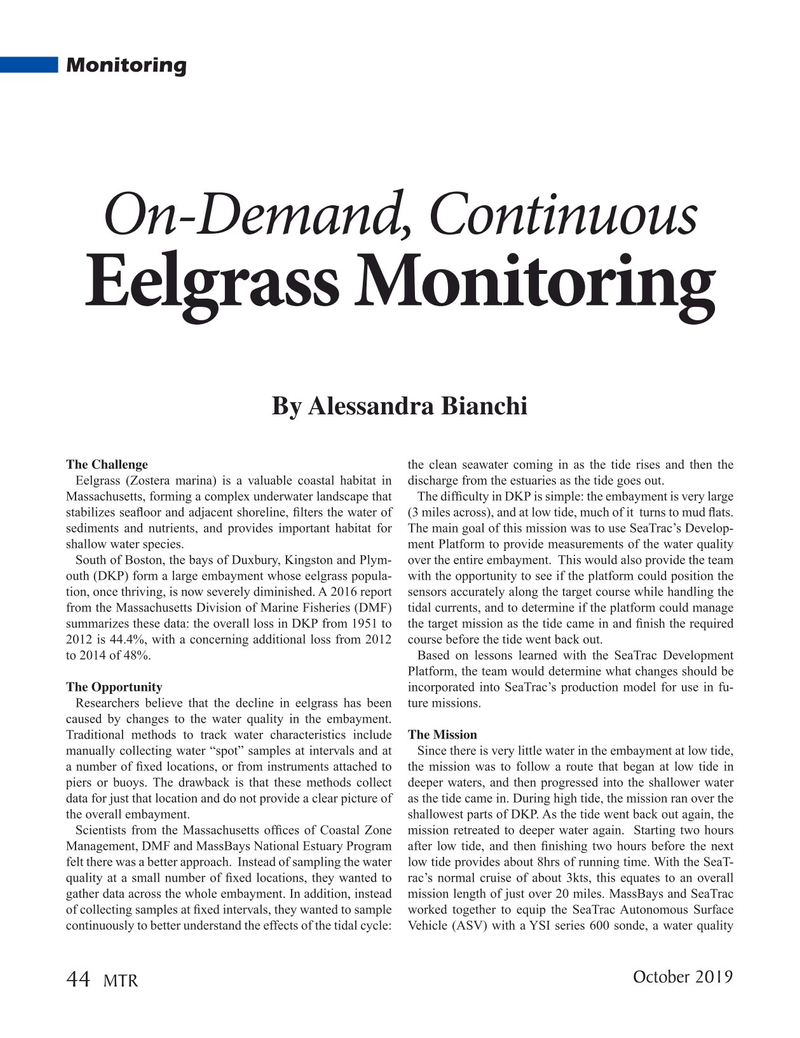 Eelgrass (Zostera marina) is a valuable coastal habitat in discharge from the estuaries as the tide goes out.

Massachusetts, forming a complex underwater landscape that The dif? culty in DKP is simple: the embayment is very large stabilizes sea? oor and adjacent shoreline, ? lters the water of (3 miles across), and at low tide, much of it turns to mud ? ats. sediments and nutrients, and provides important habitat for The main goal of this mission was to use SeaTrac’s Develop- shallow water species. ment Platform to provide measurements of the water quality

South of Boston, the bays of Duxbury, Kingston and Plym- over the entire embayment. This would also provide the team outh (DKP) form a large embayment whose eelgrass popula- with the opportunity to see if the platform could position the tion, once thriving, is now severely diminished. A 2016 report sensors accurately along the target course while handling the from the Massachusetts Division of Marine Fisheries (DMF) tidal currents, and to determine if the platform could manage summarizes these data: the overall loss in DKP from 1951 to the target mission as the tide came in and ? nish the required 2012 is 44.4%, with a concerning additional loss from 2012 course before the tide went back out.

to 2014 of 48%. Based on lessons learned with the SeaTrac Development

Platform, the team would determine what changes should be

Researchers believe that the decline in eelgrass has been ture missions.

caused by changes to the water quality in the embayment.

Traditional methods to track water characteristics include The Mission manually collecting water “spot” samples at intervals and at Since there is very little water in the embayment at low tide, a number of ? xed locations, or from instruments attached to the mission was to follow a route that began at low tide in piers or buoys. The drawback is that these methods collect deeper waters, and then progressed into the shallower water data for just that location and do not provide a clear picture of as the tide came in. During high tide, the mission ran over the the overall embayment. shallowest parts of DKP. As the tide went back out again, the

Management, DMF and MassBays National Estuary Program after low tide, and then ? nishing two hours before the next felt there was a better approach. Instead of sampling the water low tide provides about 8hrs of running time. With the SeaT- quality at a small number of ? xed locations, they wanted to rac’s normal cruise of about 3kts, this equates to an overall gather data across the whole embayment. In addition, instead mission length of just over 20 miles. MassBays and SeaTrac of collecting samples at ? xed intervals, they wanted to sample worked together to equip the SeaTrac Autonomous Surface continuously to better understand the effects of the tidal cycle: Vehicle (ASV) with a YSI series 600 sonde, a water quality