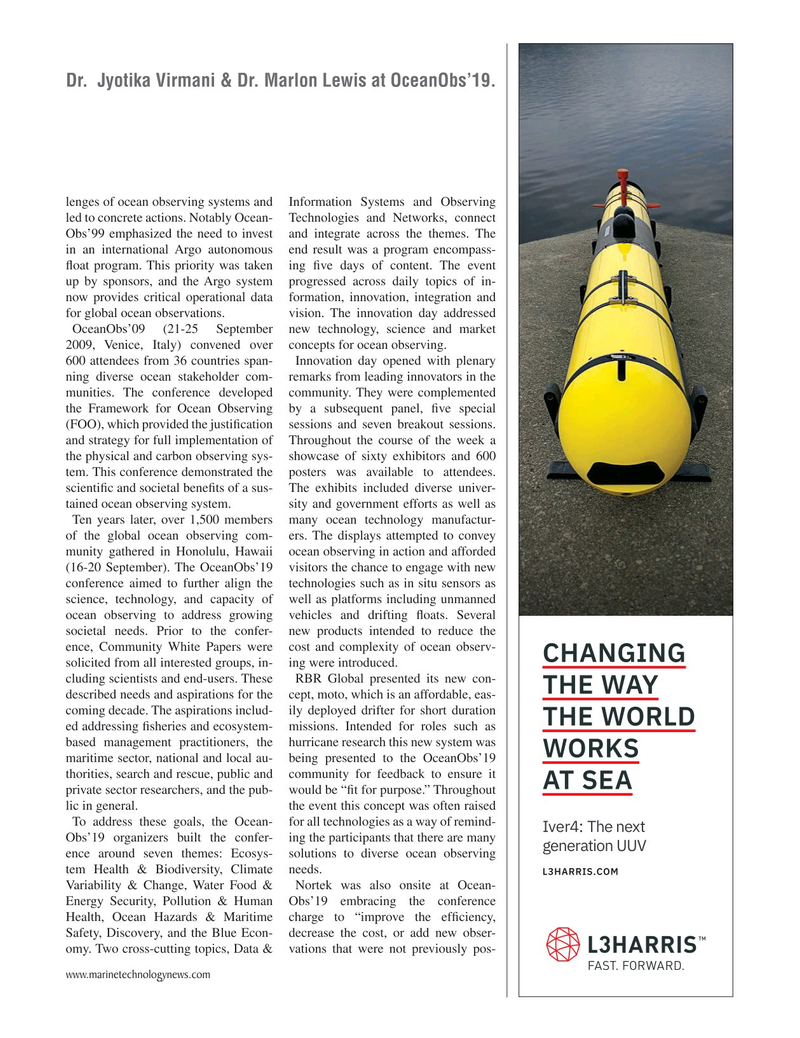 Obs’99 emphasized the need to invest and integrate across the themes. The in an international Argo autonomous end result was a program encompass- ? oat program. This priority was taken ing ? ve days of content. The event up by sponsors, and the Argo system progressed across daily topics of in- now provides critical operational data formation, innovation, integration and for global ocean observations. vision. The innovation day addressed

600 attendees from 36 countries span- Innovation day opened with plenary ning diverse ocean stakeholder com- remarks from leading innovators in the munities. The conference developed community. They were complemented the Framework for Ocean Observing by a subsequent panel, ? ve special (FOO), which provided the justi? cation sessions and seven breakout sessions. and strategy for full implementation of Throughout the course of the week a the physical and carbon observing sys- showcase of sixty exhibitors and 600 tem. This conference demonstrated the posters was available to attendees. scienti? c and societal bene? ts of a sus- The exhibits included diverse univer- tained ocean observing system. sity and government efforts as well as

Ten years later, over 1,500 members many ocean technology manufactur- of the global ocean observing com- ers. The displays attempted to convey munity gathered in Honolulu, Hawaii ocean observing in action and afforded (16-20 September). The OceanObs’19 visitors the chance to engage with new conference aimed to further align the technologies such as in situ sensors as science, technology, and capacity of well as platforms including unmanned ocean observing to address growing vehicles and drifting ? oats. Several societal needs. Prior to the confer- new products intended to reduce the ence, Community White Papers were cost and complexity of ocean observ-

CHANGING solicited from all interested groups, in- ing were introduced.

THE WAY described needs and aspirations for the cept, moto, which is an affordable, eas- coming decade. The aspirations includ- ily deployed drifter for short duration

THE WORLD ed addressing ? sheries and ecosystem- missions. Intended for roles such as based management practitioners, the hurricane research this new system was

WORKS maritime sector, national and local au- being presented to the OceanObs’19 thorities, search and rescue, public and community for feedback to ensure it

AT SEA private sector researchers, and the pub- would be “? t for purpose.” Throughout lic in general. the event this concept was often raised

To address these goals, the Ocean- for all technologies as a way of remind-