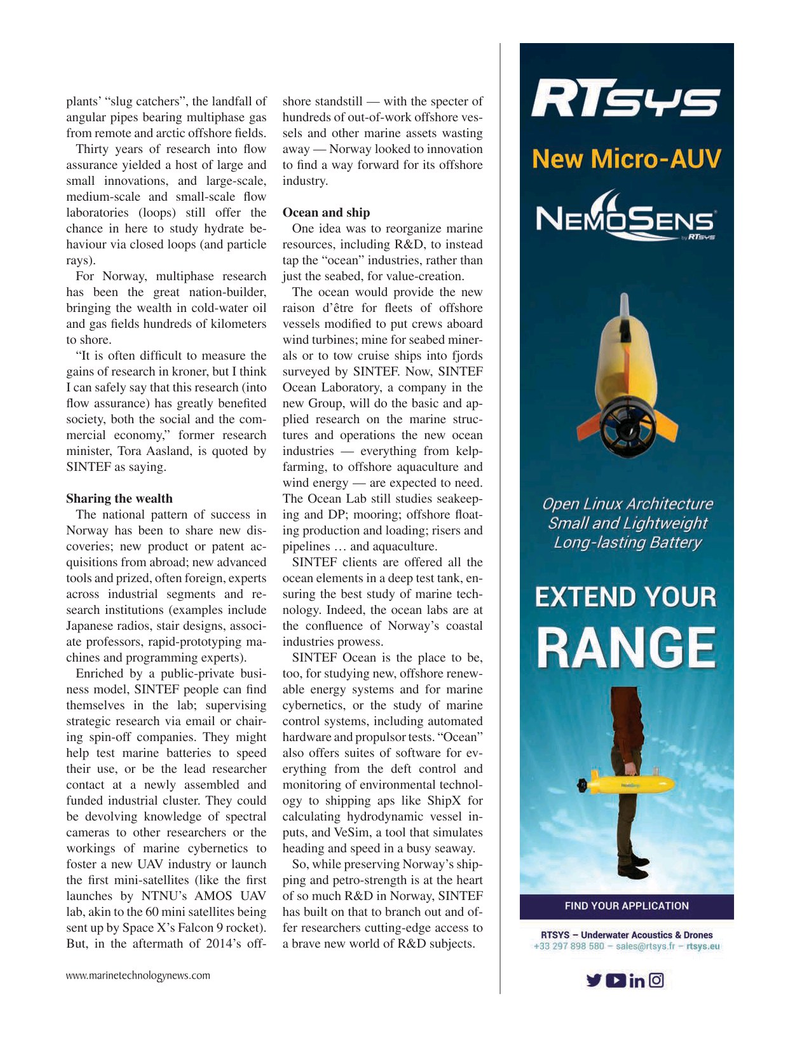 Thirty years of research into ? ow away — Norway looked to innovation assurance yielded a host of large and to ? nd a way forward for its offshore small innovations, and large-scale, industry. medium-scale and small-scale ? ow laboratories (loops) still offer the Ocean and ship chance in here to study hydrate be- One idea was to reorganize marine haviour via closed loops (and particle resources, including R&D, to instead rays). tap the “ocean” industries, rather than

For Norway, multiphase research just the seabed, for value-creation. has been the great nation-builder, The ocean would provide the new bringing the wealth in cold-water oil raison d’être for ? eets of offshore and gas ? elds hundreds of kilometers vessels modi? ed to put crews aboard to shore. wind turbines; mine for seabed miner- “It is often dif? cult to measure the als or to tow cruise ships into fjords gains of research in kroner, but I think surveyed by SINTEF. Now, SINTEF

I can safely say that this research (into Ocean Laboratory, a company in the ? ow assurance) has greatly bene? ted new Group, will do the basic and ap- society, both the social and the com- plied research on the marine struc- mercial economy,” former research tures and operations the new ocean minister, Tora Aasland, is quoted by industries — everything from kelp-

SINTEF as saying. farming, to offshore aquaculture and wind energy — are expected to need.

The national pattern of success in ing and DP; mooring; offshore ? oat-

Norway has been to share new dis- ing production and loading; risers and coveries; new product or patent ac- pipelines … and aquaculture.

quisitions from abroad; new advanced SINTEF clients are offered all the tools and prized, often foreign, experts ocean elements in a deep test tank, en- across industrial segments and re- suring the best study of marine tech- search institutions (examples include nology. Indeed, the ocean labs are at

Enriched by a public-private busi- too, for studying new, offshore renew- ness model, SINTEF people can ? nd able energy systems and for marine themselves in the lab; supervising cybernetics, or the study of marine strategic research via email or chair- control systems, including automated ing spin-off companies. They might hardware and propulsor tests. “Ocean” help test marine batteries to speed also offers suites of software for ev- their use, or be the lead researcher erything from the deft control and contact at a newly assembled and monitoring of environmental technol- funded industrial cluster. They could ogy to shipping aps like ShipX for be devolving knowledge of spectral calculating hydrodynamic vessel in- cameras to other researchers or the puts, and VeSim, a tool that simulates workings of marine cybernetics to heading and speed in a busy seaway. foster a new UAV industry or launch So, while preserving Norway’s ship- the ? rst mini-satellites (like the ? rst ping and petro-strength is at the heart launches by NTNU’s AMOS UAV of so much R&D in Norway, SINTEF lab, akin to the 60 mini satellites being has built on that to branch out and of- sent up by Space X’s Falcon 9 rocket). fer researchers cutting-edge access to

But, in the aftermath of 2014’s off- a brave new world of R&D subjects. www.marinetechnologynews.com