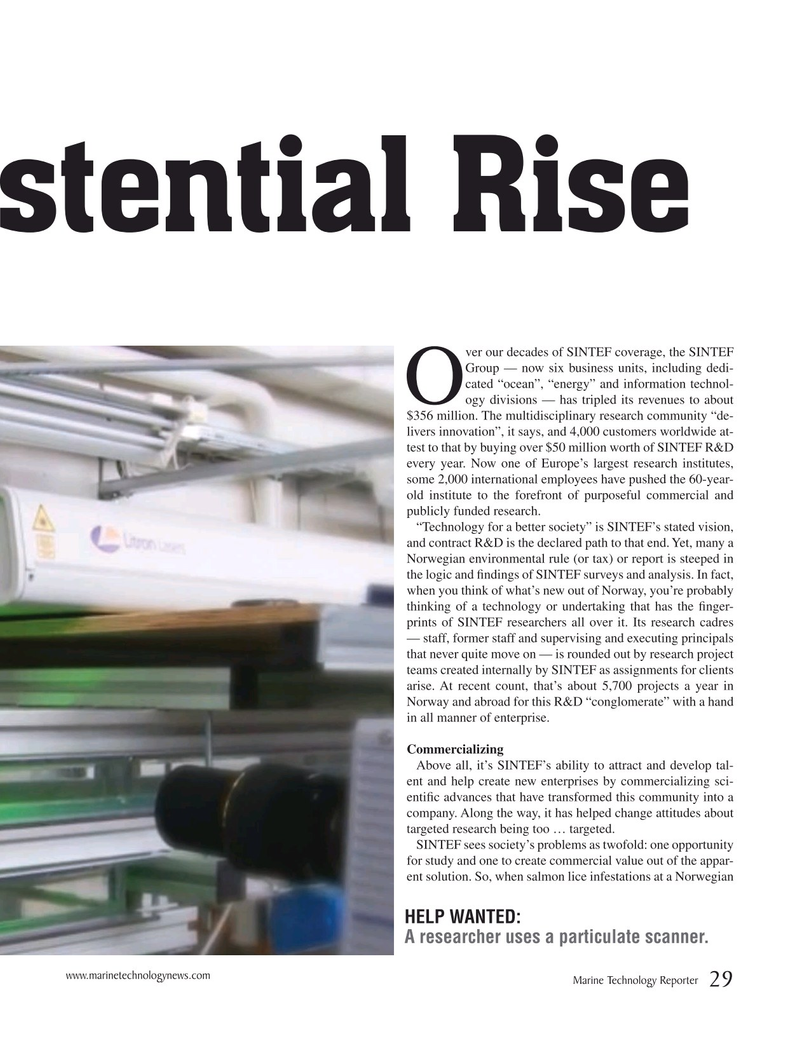 istential Rise ver our decades of SINTEF coverage, the SINTEF

Oogy divisions — has tripled its revenues to about $356 million. The multidisciplinary research community “de- livers innovation”, it says, and 4,000 customers worldwide at- test to that by buying over $50 million worth of SINTEF R&D every year. Now one of Europe’s largest research institutes, some 2,000 international employees have pushed the 60-year- old institute to the forefront of purposeful commercial and publicly funded research. “Technology for a better society” is SINTEF’s stated vision, and contract R&D is the declared path to that end. Yet, many a

Norwegian environmental rule (or tax) or report is steeped in the logic and ? ndings of SINTEF surveys and analysis. In fact, when you think of what’s new out of Norway, you’re probably thinking of a technology or undertaking that has the ? nger- prints of SINTEF researchers all over it. Its research cadres — staff, former staff and supervising and executing principals that never quite move on — is rounded out by research project teams created internally by SINTEF as assignments for clients arise. At recent count, that’s about 5,700 projects a year in

Norway and abroad for this R&D “conglomerate” with a hand in all manner of enterprise.

Above all, it’s SINTEF’s ability to attract and develop tal- ent and help create new enterprises by commercializing sci- enti? c advances that have transformed this community into a company. Along the way, it has helped change attitudes about targeted research being too … targeted.

SINTEF sees society’s problems as twofold: one opportunity for study and one to create commercial value out of the appar- ent solution. So, when salmon lice infestations at a Norwegian