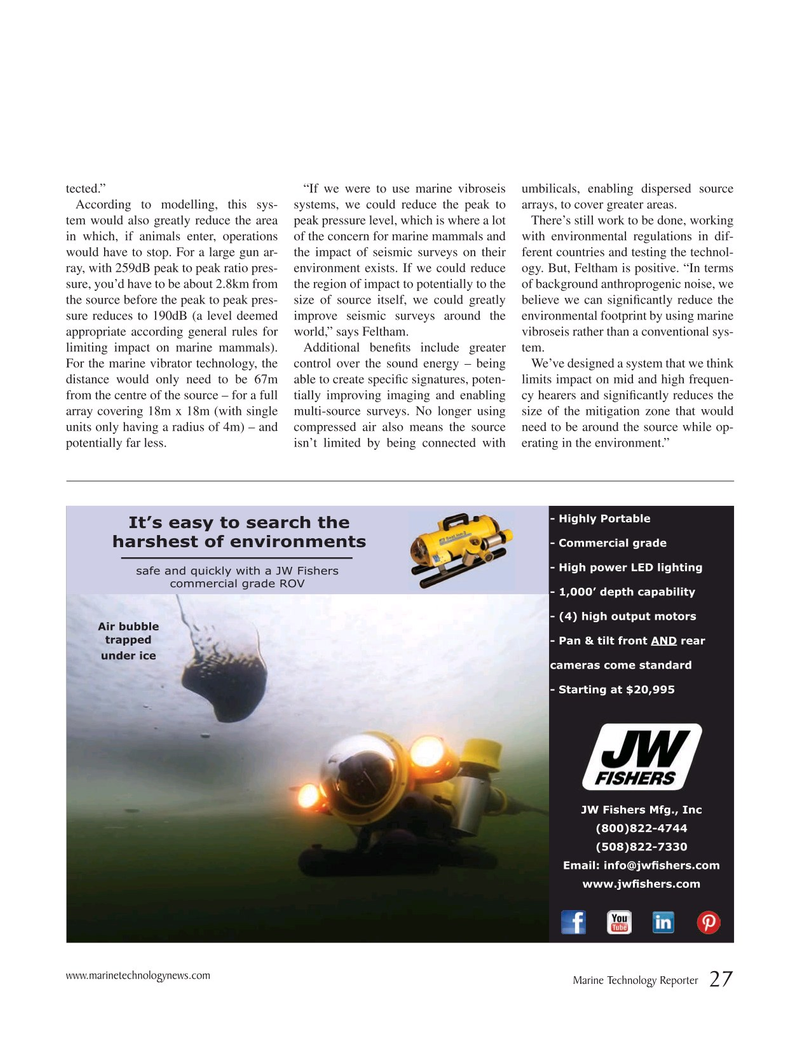 tected.” “If we were to use marine vibroseis umbilicals, enabling dispersed source

According to modelling, this sys- systems, we could reduce the peak to arrays, to cover greater areas. tem would also greatly reduce the area peak pressure level, which is where a lot There’s still work to be done, working in which, if animals enter, operations of the concern for marine mammals and with environmental regulations in dif- would have to stop. For a large gun ar- the impact of seismic surveys on their ferent countries and testing the technol- ray, with 259dB peak to peak ratio pres- environment exists. If we could reduce ogy. But, Feltham is positive. “In terms sure, you’d have to be about 2.8km from the region of impact to potentially to the of background anthroprogenic noise, we the source before the peak to peak pres- size of source itself, we could greatly believe we can signi? cantly reduce the sure reduces to 190dB (a level deemed improve seismic surveys around the environmental footprint by using marine appropriate according general rules for world,” says Feltham. vibroseis rather than a conventional sys- limiting impact on marine mammals). Additional bene? ts include greater tem.

For the marine vibrator technology, the control over the sound energy – being We’ve designed a system that we think distance would only need to be 67m able to create speci? c signatures, poten- limits impact on mid and high frequen- from the centre of the source – for a full tially improving imaging and enabling cy hearers and signi? cantly reduces the array covering 18m x 18m (with single multi-source surveys. No longer using size of the mitigation zone that would units only having a radius of 4m) – and compressed air also means the source need to be around the source while op- potentially far less. isn’t limited by being connected with erating in the environment.” - Highly Portable