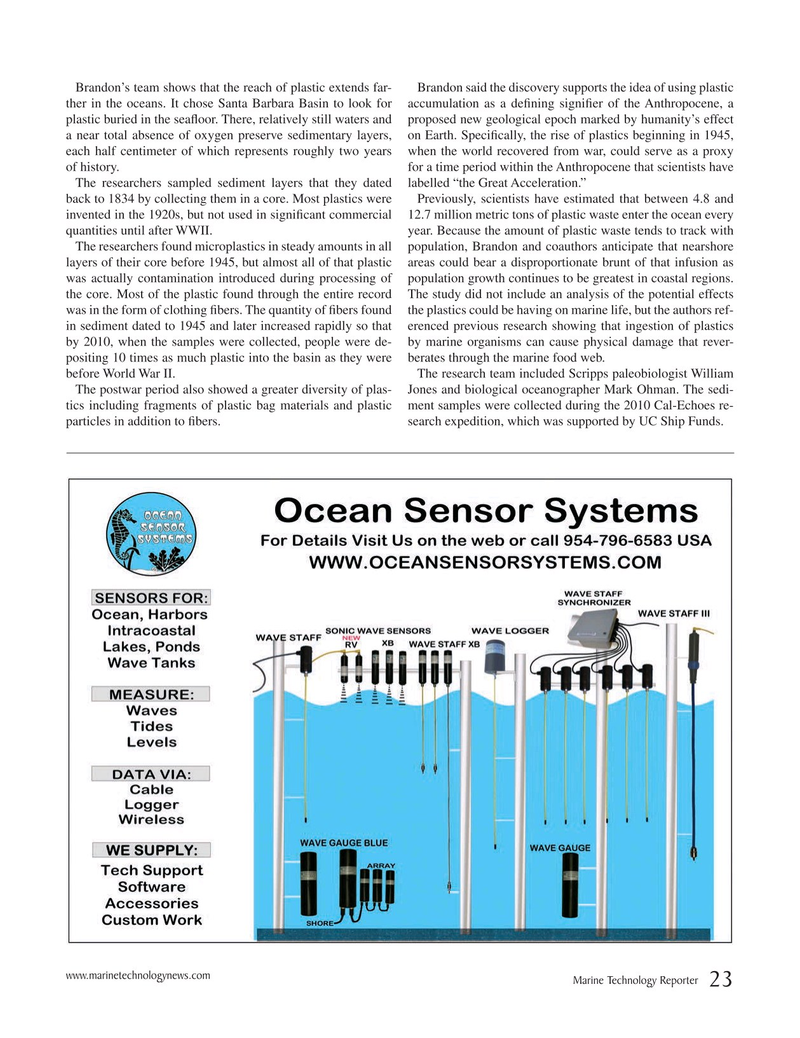 Brandon’s team shows that the reach of plastic extends far- Brandon said the discovery supports the idea of using plastic ther in the oceans. It chose Santa Barbara Basin to look for accumulation as a de? ning signi? er of the Anthropocene, a plastic buried in the sea? oor. There, relatively still waters and proposed new geological epoch marked by humanity’s effect a near total absence of oxygen preserve sedimentary layers, on Earth. Speci? cally, the rise of plastics beginning in 1945, each half centimeter of which represents roughly two years when the world recovered from war, could serve as a proxy of history. for a time period within the Anthropocene that scientists have

The researchers sampled sediment layers that they dated labelled “the Great Acceleration.” back to 1834 by collecting them in a core. Most plastics were Previously, scientists have estimated that between 4.8 and invented in the 1920s, but not used in signi? cant commercial 12.7 million metric tons of plastic waste enter the ocean every quantities until after WWII. year. Because the amount of plastic waste tends to track with

The researchers found microplastics in steady amounts in all population, Brandon and coauthors anticipate that nearshore layers of their core before 1945, but almost all of that plastic areas could bear a disproportionate brunt of that infusion as was actually contamination introduced during processing of population growth continues to be greatest in coastal regions. the core. Most of the plastic found through the entire record The study did not include an analysis of the potential effects was in the form of clothing ? bers. The quantity of ? bers found the plastics could be having on marine life, but the authors ref- in sediment dated to 1945 and later increased rapidly so that erenced previous research showing that ingestion of plastics by 2010, when the samples were collected, people were de- by marine organisms can cause physical damage that rever- positing 10 times as much plastic into the basin as they were berates through the marine food web.

The postwar period also showed a greater diversity of plas- Jones and biological oceanographer Mark Ohman. The sedi- tics including fragments of plastic bag materials and plastic ment samples were collected during the 2010 Cal-Echoes re- particles in addition to ? bers. search expedition, which was supported by UC Ship Funds.