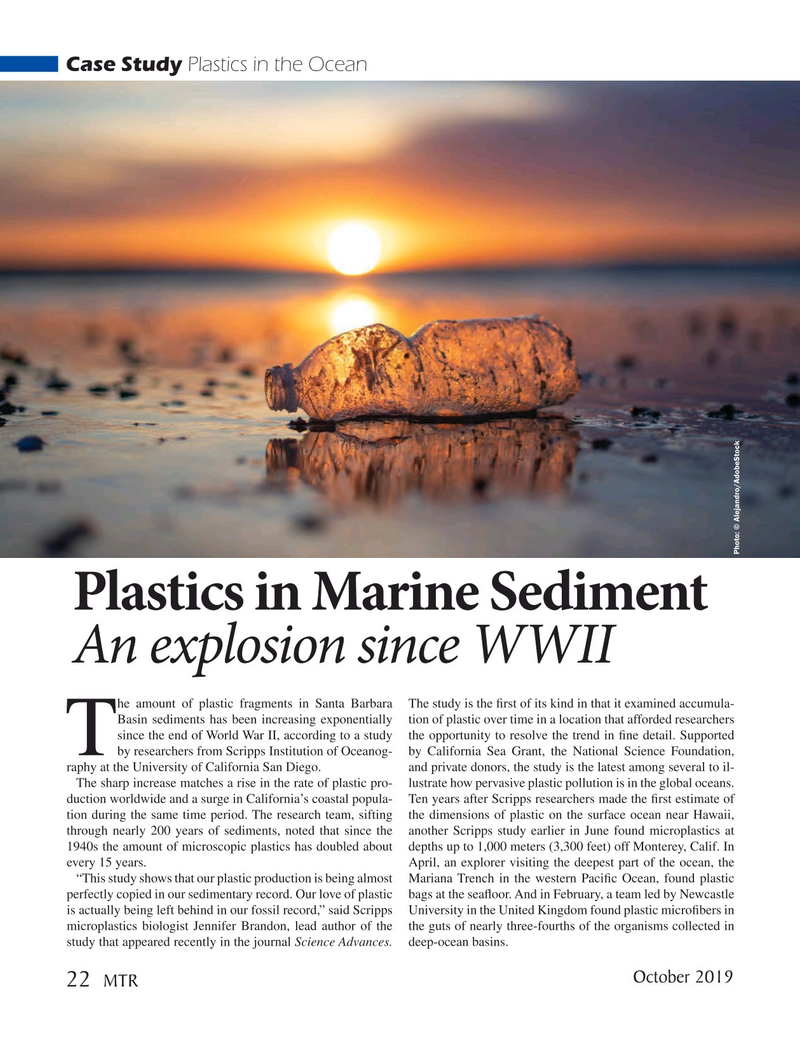 Case Study Plastics in the Ocean

An explosion since WWII he amount of plastic fragments in Santa Barbara The study is the ? rst of its kind in that it examined accumula-

Basin sediments has been increasing exponentially tion of plastic over time in a location that afforded researchers since the end of World War II, according to a study the opportunity to resolve the trend in ? ne detail. Supported by researchers from Scripps Institution of Oceanog- by California Sea Grant, the National Science Foundation,

T raphy at the University of California San Diego. and private donors, the study is the latest among several to il-

The sharp increase matches a rise in the rate of plastic pro- lustrate how pervasive plastic pollution is in the global oceans. duction worldwide and a surge in California’s coastal popula- Ten years after Scripps researchers made the ? rst estimate of tion during the same time period. The research team, sifting the dimensions of plastic on the surface ocean near Hawaii, through nearly 200 years of sediments, noted that since the another Scripps study earlier in June found microplastics at 1940s the amount of microscopic plastics has doubled about depths up to 1,000 meters (3,300 feet) off Monterey, Calif. In every 15 years. April, an explorer visiting the deepest part of the ocean, the “This study shows that our plastic production is being almost Mariana Trench in the western Paci? c Ocean, found plastic perfectly copied in our sedimentary record. Our love of plastic bags at the sea? oor. And in February, a team led by Newcastle is actually being left behind in our fossil record,” said Scripps University in the United Kingdom found plastic micro? bers in microplastics biologist Jennifer Brandon, lead author of the the guts of nearly three-fourths of the organisms collected in study that appeared recently in the journal Science Advances. deep-ocean basins.