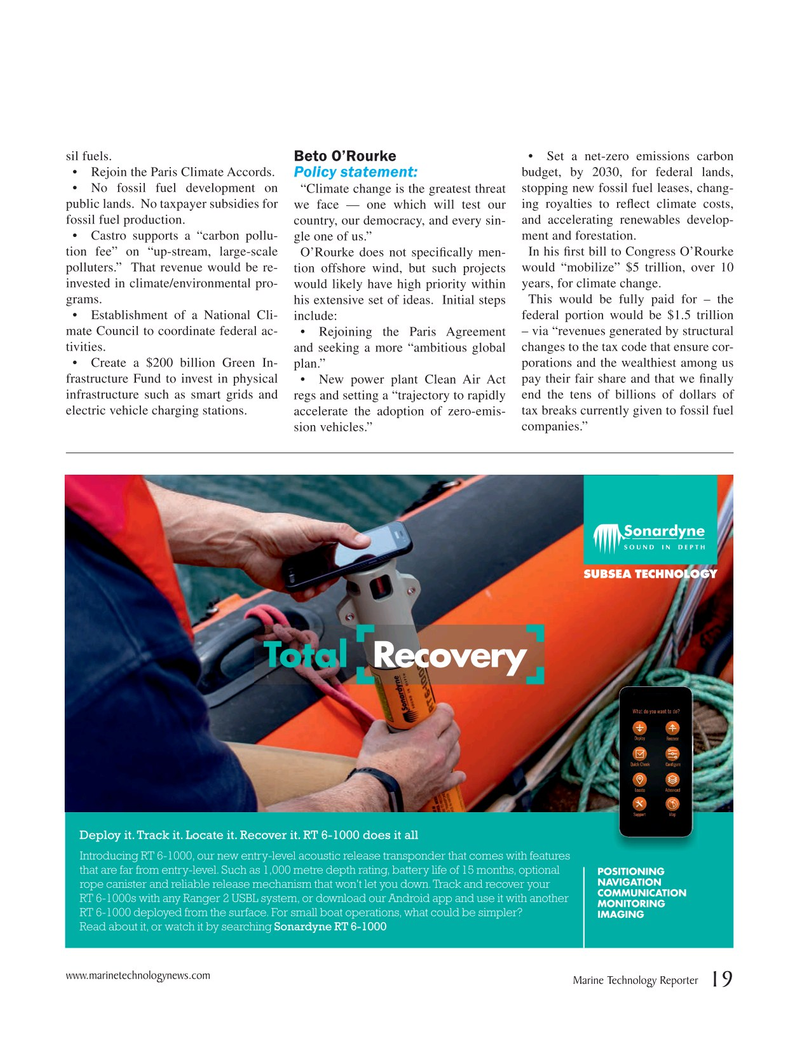 Policy statement: • No fossil fuel development on “Climate change is the greatest threat stopping new fossil fuel leases, chang- public lands. No taxpayer subsidies for we face — one which will test our ing royalties to re? ect climate costs, fossil fuel production. country, our democracy, and every sin- and accelerating renewables develop- • Castro supports a “carbon pollu- gle one of us.” ment and forestation.

tion fee” on “up-stream, large-scale O’Rourke does not speci? cally men- In his ? rst bill to Congress O’Rourke polluters.” That revenue would be re- tion offshore wind, but such projects would “mobilize” $5 trillion, over 10 invested in climate/environmental pro- would likely have high priority within years, for climate change. grams. his extensive set of ideas. Initial steps This would be fully paid for – the • Establishment of a National Cli- include: federal portion would be $1.5 trillion mate Council to coordinate federal ac- • Rejoining the Paris Agreement – via “revenues generated by structural tivities. and seeking a more “ambitious global changes to the tax code that ensure cor- • Create a $200 billion Green In- plan.” porations and the wealthiest among us frastructure Fund to invest in physical • New power plant Clean Air Act pay their fair share and that we ? nally infrastructure such as smart grids and regs and setting a “trajectory to rapidly end the tens of billions of dollars of electric vehicle charging stations. accelerate the adoption of zero-emis- tax breaks currently given to fossil fuel sion vehicles.” companies.” www.marinetechnologynews.com