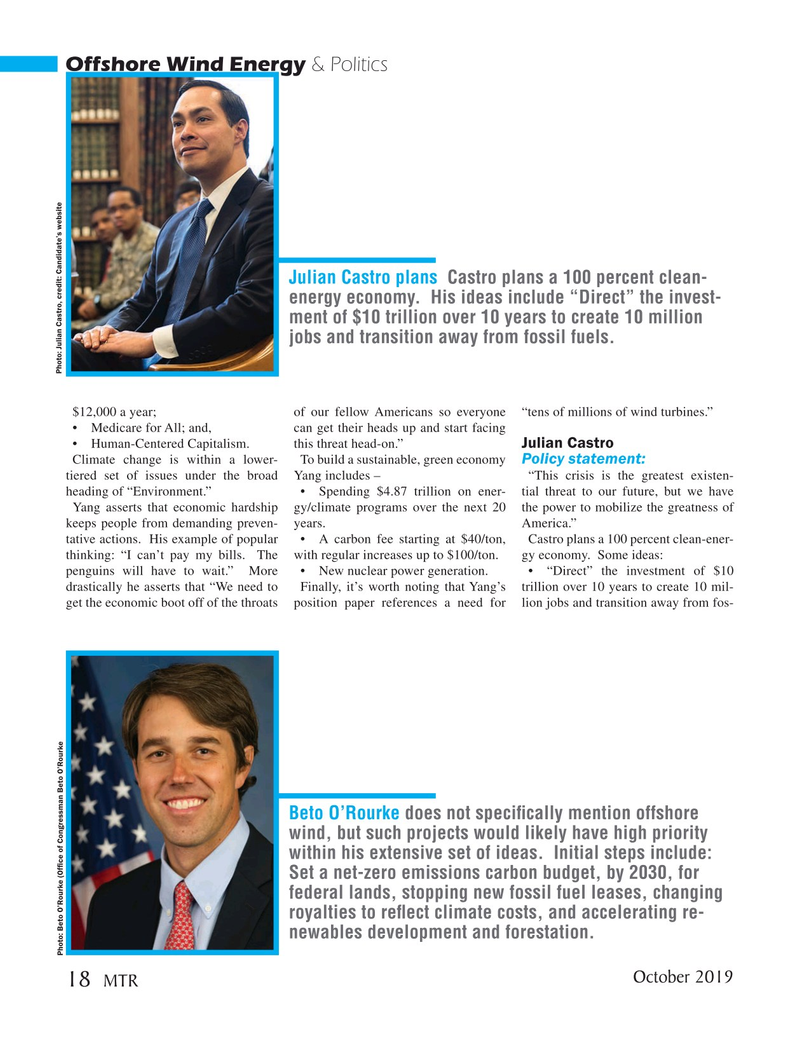 Julian Castro plans Castro plans a 100 percent clean- energy economy. His ideas include “Direct” the invest- ment of $10 trillion over 10 years to create 10 million jobs and transition away from fossil fuels.

Photo: Julian Castro, credit: Candidate’s website $12,000 a year; of our fellow Americans so everyone “tens of millions of wind turbines.” • Medicare for All; and, can get their heads up and start facing • Human-Centered Capitalism. this threat head-on.” Julian Castro

Climate change is within a lower- To build a sustainable, green economy Policy statement: tiered set of issues under the broad Yang includes – “This crisis is the greatest existen- heading of “Environment.” • Spending $4.87 trillion on ener- tial threat to our future, but we have

Yang asserts that economic hardship gy/climate programs over the next 20 the power to mobilize the greatness of keeps people from demanding preven- years. America.” tative actions. His example of popular • A carbon fee starting at $40/ton, Castro plans a 100 percent clean-ener- thinking: “I can’t pay my bills. The with regular increases up to $100/ton. gy economy. Some ideas: penguins will have to wait.” More • New nuclear power generation. • “Direct” the investment of $10 drastically he asserts that “We need to Finally, it’s worth noting that Yang’s trillion over 10 years to create 10 mil- get the economic boot off of the throats position paper references a need for lion jobs and transition away from fos-

Beto O’Rourke does not speci? cally mention offshore wind, but such projects would likely have high priority within his extensive set of ideas. Initial steps include: