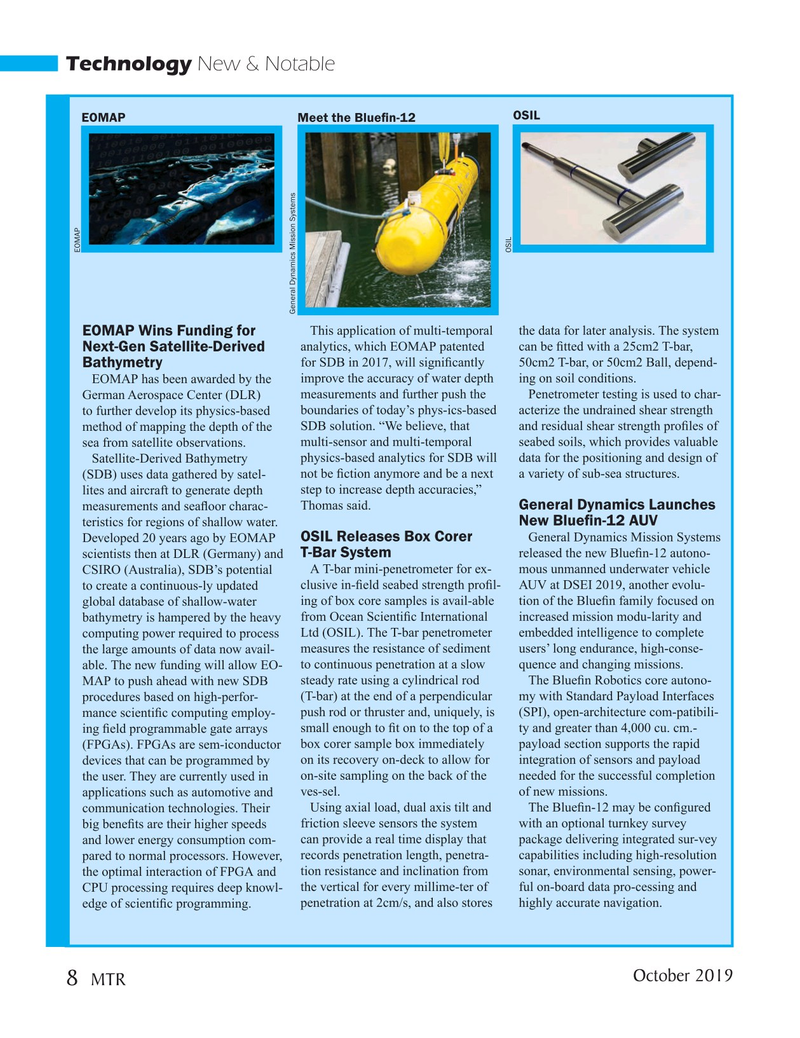 This application of multi-temporal the data for later analysis. The system

EOMAP Wins Funding for analytics, which EOMAP patented can be ? tted with a 25cm2 T-bar,

EOMAP has been awarded by the improve the accuracy of water depth ing on soil conditions.

German Aerospace Center (DLR) measurements and further push the Penetrometer testing is used to char- to further develop its physics-based boundaries of today’s phys-ics-based acterize the undrained shear strength method of mapping the depth of the SDB solution. “We believe, that and residual shear strength pro? les of sea from satellite observations. multi-sensor and multi-temporal seabed soils, which provides valuable

Satellite-Derived Bathymetry physics-based analytics for SDB will data for the positioning and design of (SDB) uses data gathered by satel- not be ? ction anymore and be a next a variety of sub-sea structures.

MAP to push ahead with new SDB steady rate using a cylindrical rod The Blue? n Robotics core autono- procedures based on high-perfor- (T-bar) at the end of a perpendicular my with Standard Payload Interfaces mance scienti? c computing employ- push rod or thruster and, uniquely, is (SPI), open-architecture com-patibili- ing ? eld programmable gate arrays small enough to ? t on to the top of a ty and greater than 4,000 cu. cm.- (FPGAs). FPGAs are sem-iconductor box corer sample box immediately payload section supports the rapid devices that can be programmed by on its recovery on-deck to allow for integration of sensors and payload the user. They are currently used in on-site sampling on the back of the needed for the successful completion applications such as automotive and ves-sel. of new missions.