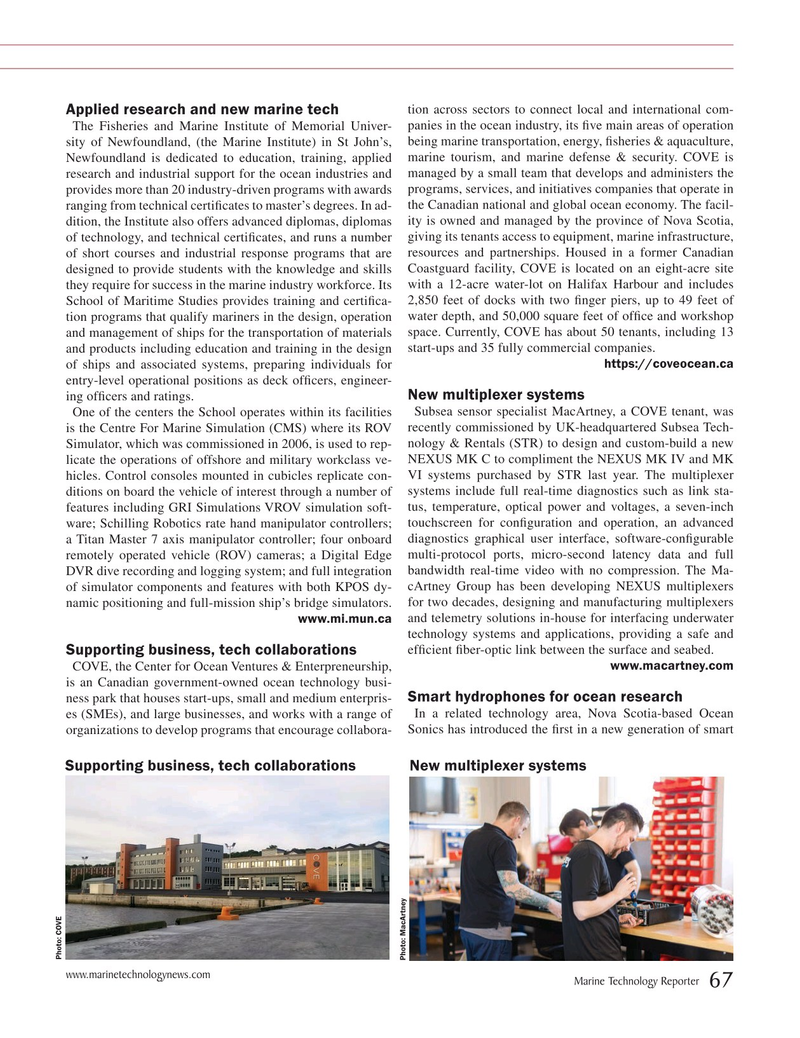 tion across sectors to connect local and international com-

The Fisheries and Marine Institute of Memorial Univer- panies in the ocean industry, its ? ve main areas of operation sity of Newfoundland, (the Marine Institute) in St John’s, being marine transportation, energy, ? sheries & aquaculture,

Newfoundland is dedicated to education, training, applied marine tourism, and marine defense & security. COVE is research and industrial support for the ocean industries and managed by a small team that develops and administers the provides more than 20 industry-driven programs with awards programs, services, and initiatives companies that operate in ranging from technical certi? cates to master’s degrees. In ad- the Canadian national and global ocean economy. The facil- dition, the Institute also offers advanced diplomas, diplomas ity is owned and managed by the province of Nova Scotia, of technology, and technical certi? cates, and runs a number giving its tenants access to equipment, marine infrastructure, of short courses and industrial response programs that are resources and partnerships. Housed in a former Canadian designed to provide students with the knowledge and skills Coastguard facility, COVE is located on an eight-acre site they require for success in the marine industry workforce. Its with a 12-acre water-lot on Halifax Harbour and includes

School of Maritime Studies provides training and certi? ca- 2,850 feet of docks with two ? nger piers, up to 49 feet of tion programs that qualify mariners in the design, operation water depth, and 50,000 square feet of of? ce and workshop and management of ships for the transportation of materials space. Currently, COVE has about 50 tenants, including 13 and products including education and training in the design start-ups and 35 fully commercial companies.

One of the centers the School operates within its facilities Subsea sensor specialist MacArtney, a COVE tenant, was is the Centre For Marine Simulation (CMS) where its ROV recently commissioned by UK-headquartered Subsea Tech-

DVR dive recording and logging system; and full integration bandwidth real-time video with no compression. The Ma- of simulator components and features with both KPOS dy- cArtney Group has been developing NEXUS multiplexers namic positioning and full-mission ship’s bridge simulators. for two decades, designing and manufacturing multiplexers www.mi.mun.ca and telemetry solutions in-house for interfacing underwater technology systems and applications, providing a safe and ef? cient ? ber-optic link between the surface and seabed.

Smart hydrophones for ocean research ness park that houses start-ups, small and medium enterpris- es (SMEs), and large businesses, and works with a range of In a related technology area, Nova Scotia-based Ocean organizations to develop programs that encourage collabora- Sonics has introduced the ? rst in a new generation of smart