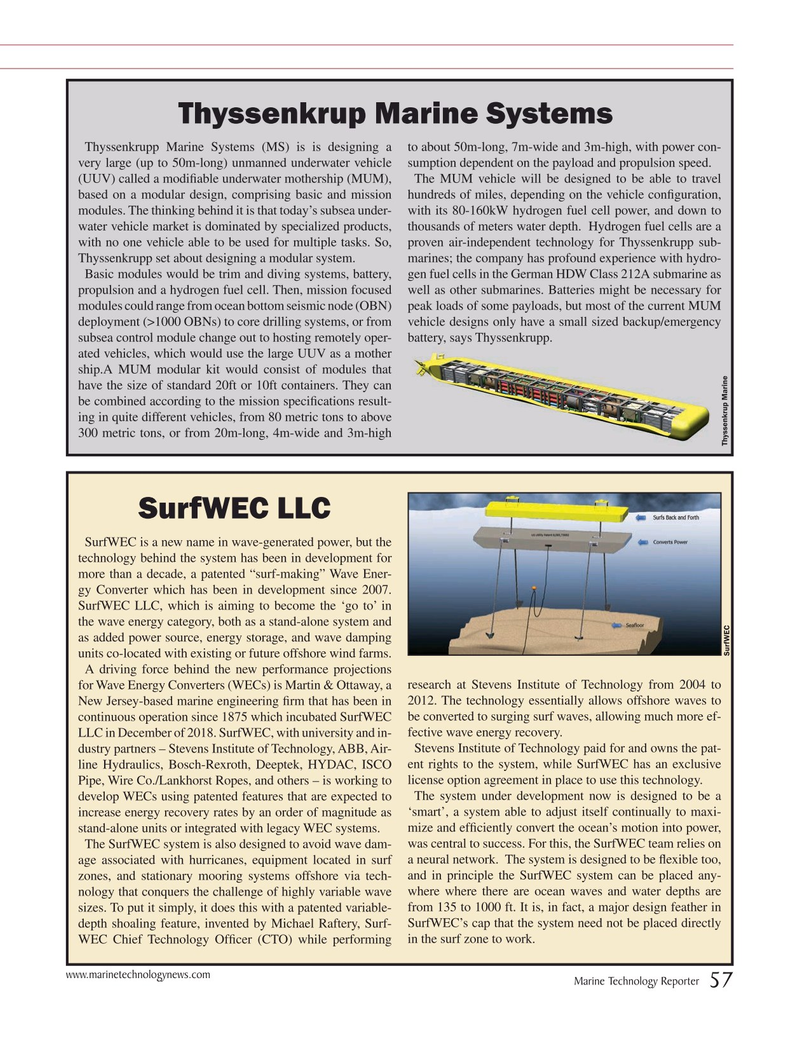 Thyssenkrupp Marine Systems (MS) is is designing a to about 50m-long, 7m-wide and 3m-high, with power con- very large (up to 50m-long) unmanned underwater vehicle sumption dependent on the payload and propulsion speed. (UUV) called a modi? able underwater mothership (MUM), The MUM vehicle will be designed to be able to travel based on a modular design, comprising basic and mission hundreds of miles, depending on the vehicle con? guration, modules. The thinking behind it is that today’s subsea under- with its 80-160kW hydrogen fuel cell power, and down to water vehicle market is dominated by specialized products, thousands of meters water depth. Hydrogen fuel cells are a with no one vehicle able to be used for multiple tasks. So, proven air-independent technology for Thyssenkrupp sub-

Thyssenkrupp set about designing a modular system. marines; the company has profound experience with hydro-

Basic modules would be trim and diving systems, battery, gen fuel cells in the German HDW Class 212A submarine as propulsion and a hydrogen fuel cell. Then, mission focused well as other submarines. Batteries might be necessary for modules could range from ocean bottom seismic node (OBN) peak loads of some payloads, but most of the current MUM deployment (>1000 OBNs) to core drilling systems, or from vehicle designs only have a small sized backup/emergency subsea control module change out to hosting remotely oper- battery, says Thyssenkrupp. ated vehicles, which would use the large UUV as a mother ship.A MUM modular kit would consist of modules that have the size of standard 20ft or 10ft containers. They can be combined according to the mission speci? cations result- ing in quite different vehicles, from 80 metric tons to above 300 metric tons, or from 20m-long, 4m-wide and 3m-high

SurfWEC LLC, which is aiming to become the ‘go to’ in the wave energy category, both as a stand-alone system and as added power source, energy storage, and wave damping

A driving force behind the new performance projections for Wave Energy Converters (WECs) is Martin & Ottaway, a research at Stevens Institute of Technology from 2004 to

New Jersey-based marine engineering ? rm that has been in 2012. The technology essentially allows offshore waves to continuous operation since 1875 which incubated SurfWEC be converted to surging surf waves, allowing much more ef-

Pipe, Wire Co./Lankhorst Ropes, and others – is working to license option agreement in place to use this technology.

develop WECs using patented features that are expected to The system under development now is designed to be a increase energy recovery rates by an order of magnitude as ‘smart’, a system able to adjust itself continually to maxi- stand-alone units or integrated with legacy WEC systems. mize and ef? ciently convert the ocean’s motion into power,

The SurfWEC system is also designed to avoid wave dam- was central to success. For this, the SurfWEC team relies on age associated with hurricanes, equipment located in surf a neural network. The system is designed to be ? exible too, zones, and stationary mooring systems offshore via tech- and in principle the SurfWEC system can be placed any- nology that conquers the challenge of highly variable wave where where there are ocean waves and water depths are sizes. To put it simply, it does this with a patented variable- from 135 to 1000 ft. It is, in fact, a major design feather in depth shoaling feature, invented by Michael Raftery, Surf- SurfWEC’s cap that the system need not be placed directly

WEC Chief Technology Of? cer (CTO) while performing in the surf zone to work. www.marinetechnologynews.com