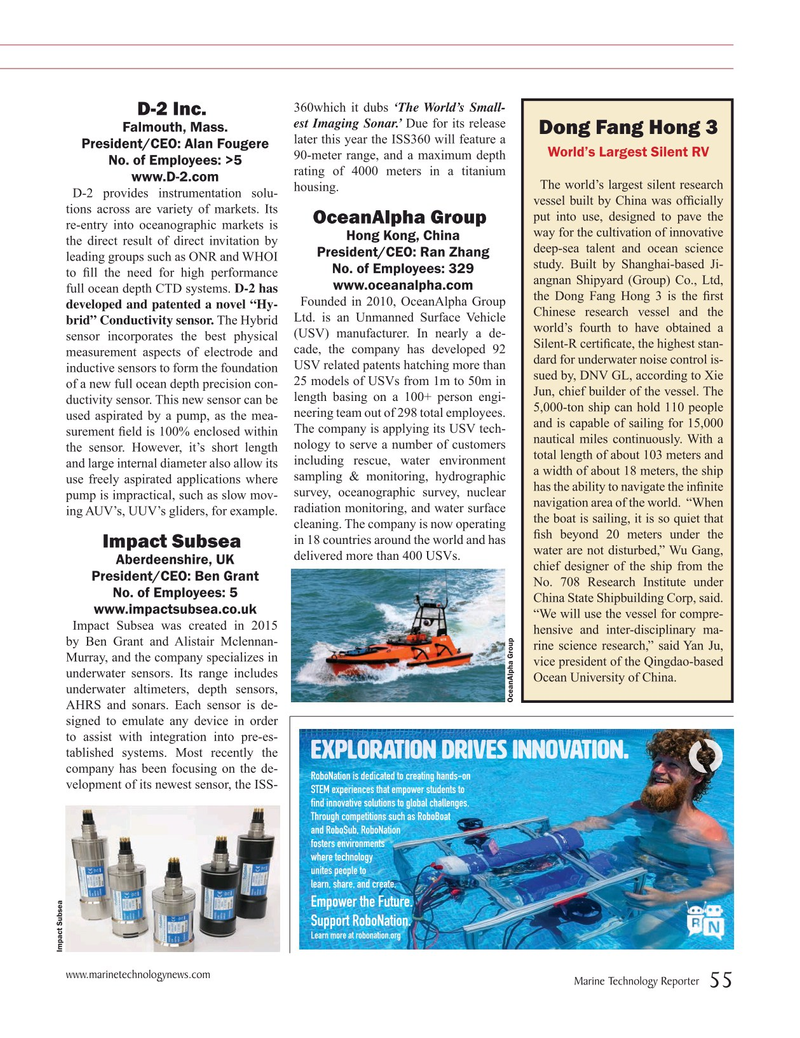 est Imaging Sonar.’ Due for its release

D-2 provides instrumentation solu- vessel built by China was of? cially tions across are variety of markets. Its put into use, designed to pave the

No. of Employees: 329 to ? ll the need for high performance angnan Shipyard (Group) Co., Ltd, www.oceanalpha.com full ocean depth CTD systems. D-2 has the Dong Fang Hong 3 is the ? rst

Founded in 2010, OceanAlpha Group developed and patented a novel “Hy-

Chinese research vessel and the

Ltd. is an Unmanned Surface Vehicle brid” Conductivity sensor. The Hybrid world’s fourth to have obtained a sensor incorporates the best physical (USV) manufacturer. In nearly a de-

Silent-R certi? cate, the highest stan- measurement aspects of electrode and cade, the company has developed 92 dard for underwater noise control is-

USV related patents hatching more than inductive sensors to form the foundation sued by, DNV GL, according to Xie 25 models of USVs from 1m to 50m in of a new full ocean depth precision con-

Jun, chief builder of the vessel. The ductivity sensor. This new sensor can be length basing on a 100+ person engi- 5,000-ton ship can hold 110 people neering team out of 298 total employees. used aspirated by a pump, as the mea- and is capable of sailing for 15,000 surement ? eld is 100% enclosed within The company is applying its USV tech- nautical miles continuously. With a the sensor. However, it’s short length nology to serve a number of customers total length of about 103 meters and including rescue, water environment and large internal diameter also allow its a width of about 18 meters, the ship use freely aspirated applications where sampling & monitoring, hydrographic has the ability to navigate the in? nite survey, oceanographic survey, nuclear pump is impractical, such as slow mov- navigation area of the world. “When radiation monitoring, and water surface ing AUV’s, UUV’s gliders, for example.

the boat is sailing, it is so quiet that cleaning. The company is now operating ? sh beyond 20 meters under the in 18 countries around the world and has

Aberdeenshire, UK chief designer of the ship from the

No. 708 Research Institute under

China State Shipbuilding Corp, said. www.impactsubsea.co.uk “We will use the vessel for compre-

Murray, and the company specializes in vice president of the Qingdao-based underwater sensors. Its range includes

AHRS and sonars. Each sensor is de- signed to emulate any device in order to assist with integration into pre-es- tablished systems. Most recently the company has been focusing on the de-

RoboNation is dedicated to creating hands-on velopment of its newest sensor, the ISS-

Through competitions such as RoboBoat and RoboSub, RoboNation fosters environments where technology unites people to learn, share, and create.