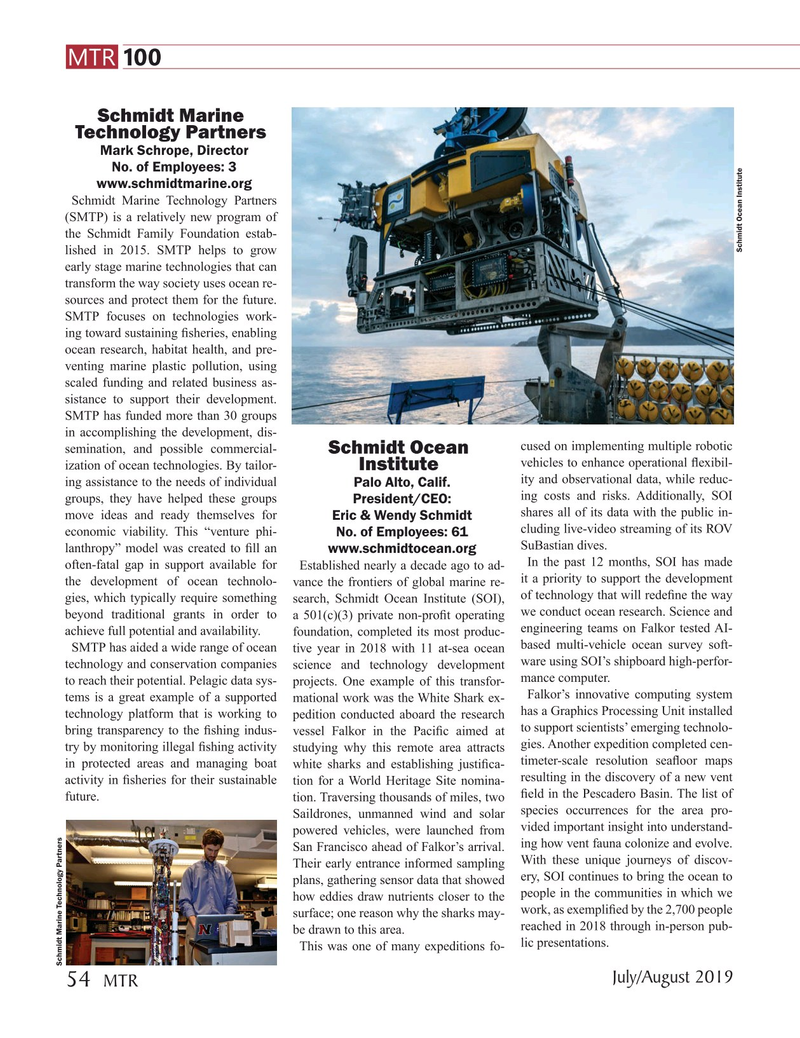 Schmidt Ocean Institute lished in 2015. SMTP helps to grow early stage marine technologies that can transform the way society uses ocean re- sources and protect them for the future.

SMTP has funded more than 30 groups in accomplishing the development, dis- cused on implementing multiple robotic semination, and possible commercial-

Institute ity and observational data, while reduc- ing assistance to the needs of individual

ing costs and risks. Additionally, SOI groups, they have helped these groups

President/CEO: shares all of its data with the public in- move ideas and ready themselves for

In the past 12 months, SOI has made often-fatal gap in support available for Established nearly a decade ago to ad- it a priority to support the development the development of ocean technolo- vance the frontiers of global marine re- gies, which typically require something search, Schmidt Ocean Institute (SOI), of technology that will rede? ne the way beyond traditional grants in order to a 501(c)(3) private non-pro? t operating we conduct ocean research. Science and engineering teams on Falkor tested AI- achieve full potential and availability. foundation, completed its most produc-

Falkor’s innovative computing system tems is a great example of a supported mational work was the White Shark ex- technology platform that is working to pedition conducted aboard the research has a Graphics Processing Unit installed bring transparency to the ? shing indus- vessel Falkor in the Paci? c aimed at to support scientists’ emerging technolo- try by monitoring illegal ? shing activity studying why this remote area attracts gies. Another expedition completed cen- timeter-scale resolution sea? oor maps in protected areas and managing boat white sharks and establishing justi? ca- resulting in the discovery of a new vent activity in ? sheries for their sustainable tion for a World Heritage Site nomina- future. tion. Traversing thousands of miles, two ? eld in the Pescadero Basin. The list of

San Francisco ahead of Falkor’s arrival. ing how vent fauna colonize and evolve.

Their early entrance informed sampling With these unique journeys of discov- plans, gathering sensor data that showed ery, SOI continues to bring the ocean to how eddies draw nutrients closer to the people in the communities in which we work, as exempli? ed by the 2,700 people surface; one reason why the sharks may- reached in 2018 through in-person pub- be drawn to this area. lic presentations.

This was one of many expeditions fo-