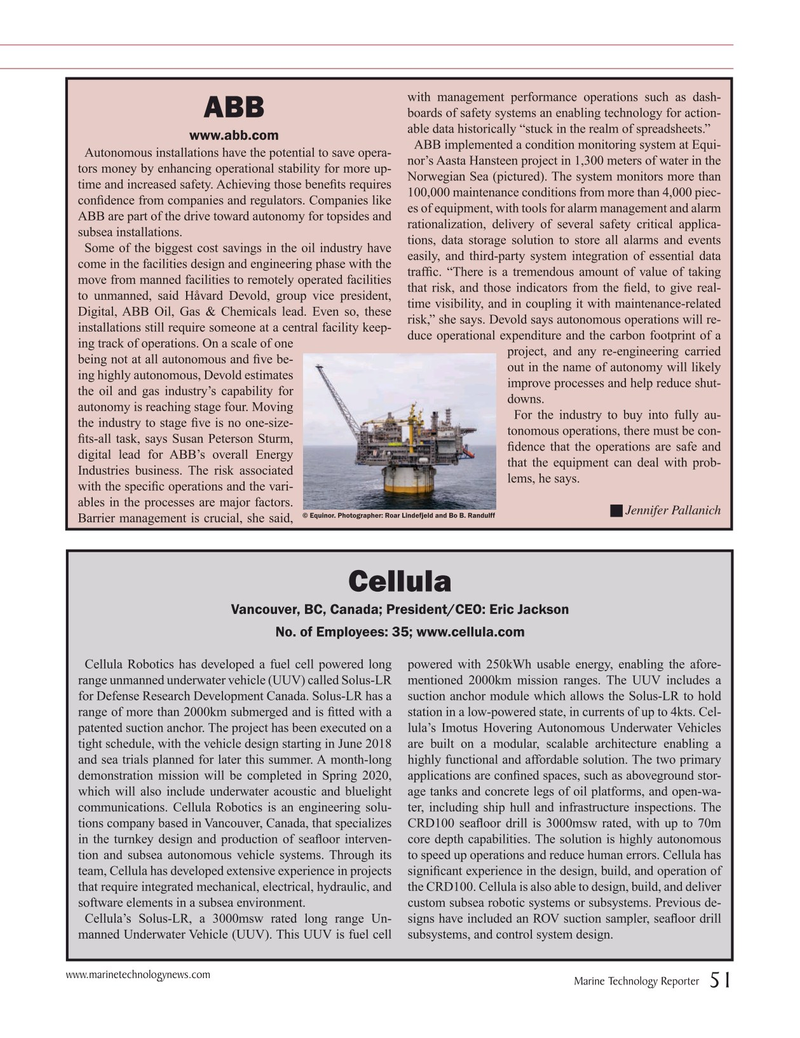 Autonomous installations have the potential to save opera- nor’s Aasta Hansteen project in 1,300 meters of water in the tors money by enhancing operational stability for more up-

Norwegian Sea (pictured). The system monitors more than time and increased safety. Achieving those bene? ts requires 100,000 maintenance conditions from more than 4,000 piec- con? dence from companies and regulators. Companies like es of equipment, with tools for alarm management and alarm

ABB are part of the drive toward autonomy for topsides and rationalization, delivery of several safety critical applica- subsea installations.

tions, data storage solution to store all alarms and events

Some of the biggest cost savings in the oil industry have easily, and third-party system integration of essential data come in the facilities design and engineering phase with the traf? c. “There is a tremendous amount of value of taking move from manned facilities to remotely operated facilities to unmanned, said Håvard Devold, group vice president, that risk, and those indicators from the ? eld, to give real-

Digital, ABB Oil, Gas & Chemicals lead. Even so, these time visibility, and in coupling it with maintenance-related risk,” she says. Devold says autonomous operations will re- installations still require someone at a central facility keep- duce operational expenditure and the carbon footprint of a ing track of operations. On a scale of one project, and any re-engineering carried being not at all autonomous and ? ve be- out in the name of autonomy will likely ing highly autonomous, Devold estimates improve processes and help reduce shut- the oil and gas industry’s capability for downs.

For the industry to buy into fully au- the industry to stage ? ve is no one-size- tonomous operations, there must be con- ? ts-all task, says Susan Peterson Sturm, ? dence that the operations are safe and digital lead for ABB’s overall Energy that the equipment can deal with prob-

with the speci? c operations and the vari- ables in the processes are major factors.

Barrier management is crucial, she said,

Cellula Robotics has developed a fuel cell powered long powered with 250kWh usable energy, enabling the afore- range unmanned underwater vehicle (UUV) called Solus-LR mentioned 2000km mission ranges. The UUV includes a for Defense Research Development Canada. Solus-LR has a suction anchor module which allows the Solus-LR to hold range of more than 2000km submerged and is ? tted with a station in a low-powered state, in currents of up to 4kts. Cel- patented suction anchor. The project has been executed on a lula’s Imotus Hovering Autonomous Underwater Vehicles tight schedule, with the vehicle design starting in June 2018 are built on a modular, scalable architecture enabling a and sea trials planned for later this summer. A month-long highly functional and affordable solution. The two primary demonstration mission will be completed in Spring 2020, applications are con? ned spaces, such as aboveground stor- which will also include underwater acoustic and bluelight age tanks and concrete legs of oil platforms, and open-wa- communications. Cellula Robotics is an engineering solu- ter, including ship hull and infrastructure inspections. The tions company based in Vancouver, Canada, that specializes CRD100 sea? oor drill is 3000msw rated, with up to 70m in the turnkey design and production of sea? oor interven- core depth capabilities. The solution is highly autonomous tion and subsea autonomous vehicle systems. Through its to speed up operations and reduce human errors. Cellula has team, Cellula has developed extensive experience in projects signi? cant experience in the design, build, and operation of that require integrated mechanical, electrical, hydraulic, and the CRD100. Cellula is also able to design, build, and deliver software elements in a subsea environment. custom subsea robotic systems or subsystems. Previous de-