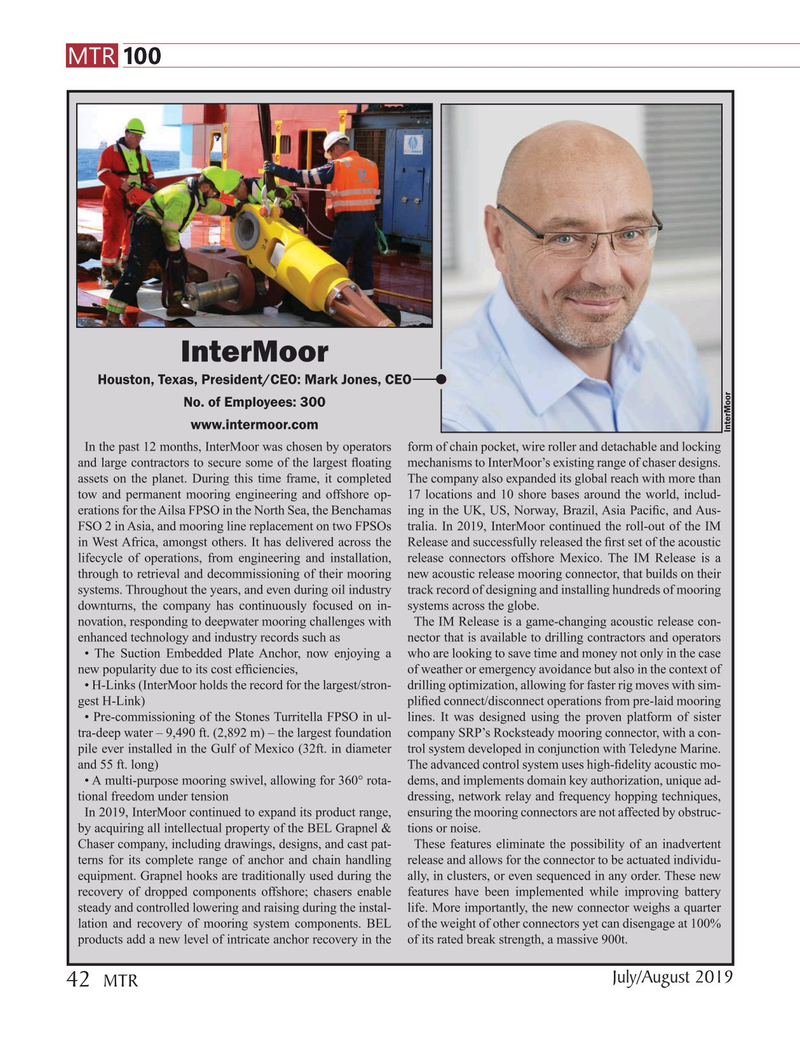 In the past 12 months, InterMoor was chosen by operators form of chain pocket, wire roller and detachable and locking and large contractors to secure some of the largest ? oating mechanisms to InterMoor’s existing range of chaser designs. assets on the planet. During this time frame, it completed The company also expanded its global reach with more than tow and permanent mooring engineering and offshore op- 17 locations and 10 shore bases around the world, includ- erations for the Ailsa FPSO in the North Sea, the Benchamas ing in the UK, US, Norway, Brazil, Asia Paci? c, and Aus-

FSO 2 in Asia, and mooring line replacement on two FPSOs tralia. In 2019, InterMoor continued the roll-out of the IM in West Africa, amongst others. It has delivered across the Release and successfully released the ? rst set of the acoustic lifecycle of operations, from engineering and installation, release connectors offshore Mexico. The IM Release is a through to retrieval and decommissioning of their mooring new acoustic release mooring connector, that builds on their systems. Throughout the years, and even during oil industry track record of designing and installing hundreds of mooring downturns, the company has continuously focused on in- systems across the globe.

novation, responding to deepwater mooring challenges with The IM Release is a game-changing acoustic release con- enhanced technology and industry records such as nector that is available to drilling contractors and operators • The Suction Embedded Plate Anchor, now enjoying a who are looking to save time and money not only in the case new popularity due to its cost ef? ciencies, of weather or emergency avoidance but also in the context of • H-Links (InterMoor holds the record for the largest/stron- drilling optimization, allowing for faster rig moves with sim- gest H-Link) pli? ed connect/disconnect operations from pre-laid mooring • Pre-commissioning of the Stones Turritella FPSO in ul- lines. It was designed using the proven platform of sister tra-deep water – 9,490 ft. (2,892 m) – the largest foundation company SRP’s Rocksteady mooring connector, with a con- pile ever installed in the Gulf of Mexico (32ft. in diameter trol system developed in conjunction with Teledyne Marine. and 55 ft. long) The advanced control system uses high-? delity acoustic mo- • A multi-purpose mooring swivel, allowing for 360° rota- dems, and implements domain key authorization, unique ad- tional freedom under tension dressing, network relay and frequency hopping techniques,

In 2019, InterMoor continued to expand its product range, ensuring the mooring connectors are not affected by obstruc- by acquiring all intellectual property of the BEL Grapnel & tions or noise.

Chaser company, including drawings, designs, and cast pat- These features eliminate the possibility of an inadvertent terns for its complete range of anchor and chain handling release and allows for the connector to be actuated individu- equipment. Grapnel hooks are traditionally used during the ally, in clusters, or even sequenced in any order. These new recovery of dropped components offshore; chasers enable features have been implemented while improving battery steady and controlled lowering and raising during the instal- life. More importantly, the new connector weighs a quarter lation and recovery of mooring system components. BEL of the weight of other connectors yet can disengage at 100% products add a new level of intricate anchor recovery in the of its rated break strength, a massive 900t.