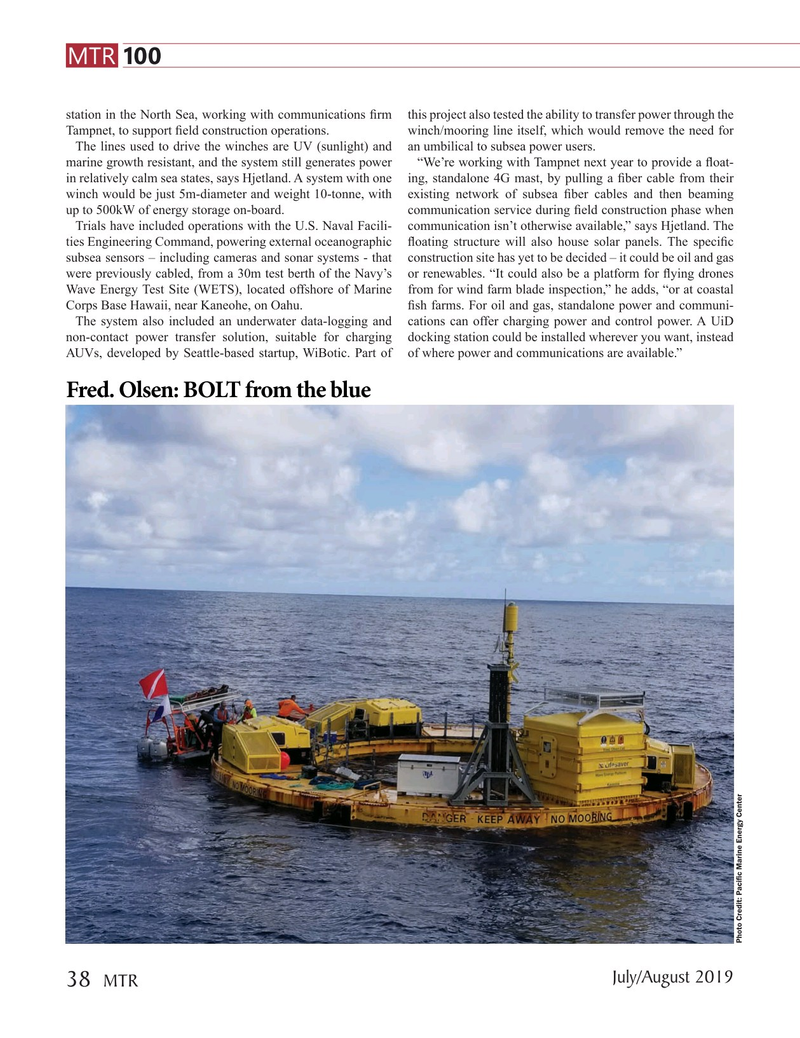 MTR 100 station in the North Sea, working with communications ? rm this project also tested the ability to transfer power through the

Tampnet, to support ? eld construction operations. winch/mooring line itself, which would remove the need for

The lines used to drive the winches are UV (sunlight) and an umbilical to subsea power users.

marine growth resistant, and the system still generates power “We’re working with Tampnet next year to provide a ? oat- in relatively calm sea states, says Hjetland. A system with one ing, standalone 4G mast, by pulling a ? ber cable from their winch would be just 5m-diameter and weight 10-tonne, with existing network of subsea ? ber cables and then beaming up to 500kW of energy storage on-board. communication service during ? eld construction phase when

Trials have included operations with the U.S. Naval Facili- communication isn’t otherwise available,” says Hjetland. The ties Engineering Command, powering external oceanographic ? oating structure will also house solar panels. The speci? c subsea sensors – including cameras and sonar systems - that construction site has yet to be decided – it could be oil and gas were previously cabled, from a 30m test berth of the Navy’s or renewables. “It could also be a platform for ? ying drones

Wave Energy Test Site (WETS), located offshore of Marine from for wind farm blade inspection,” he adds, “or at coastal

Corps Base Hawaii, near Kaneohe, on Oahu. ? sh farms. For oil and gas, standalone power and communi-

The system also included an underwater data-logging and cations can offer charging power and control power. A UiD non-contact power transfer solution, suitable for charging docking station could be installed wherever you want, instead

AUVs, developed by Seattle-based startup, WiBotic. Part of of where power and communications are available.”

Fred. Olsen: BOLT from the blue