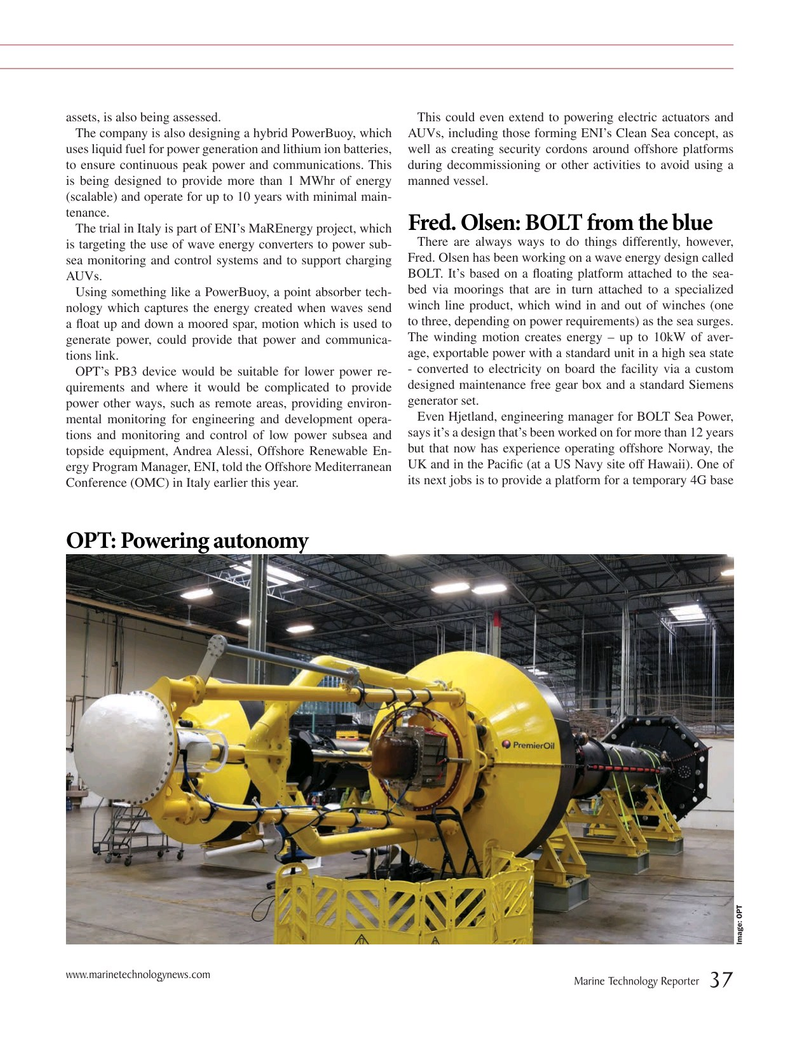 assets, is also being assessed. This could even extend to powering electric actuators and

The company is also designing a hybrid PowerBuoy, which AUVs, including those forming ENI’s Clean Sea concept, as uses liquid fuel for power generation and lithium ion batteries, well as creating security cordons around offshore platforms to ensure continuous peak power and communications. This during decommissioning or other activities to avoid using a is being designed to provide more than 1 MWhr of energy manned vessel. (scalable) and operate for up to 10 years with minimal main- tenance.

Fred. Olsen: BOLT from the blue

The trial in Italy is part of ENI’s MaREnergy project, which

There are always ways to do things differently, however, is targeting the use of wave energy converters to power sub- sea monitoring and control systems and to support charging Fred. Olsen has been working on a wave energy design called

BOLT. It’s based on a ? oating platform attached to the sea-

AUVs. bed via moorings that are in turn attached to a specialized

Using something like a PowerBuoy, a point absorber tech- nology which captures the energy created when waves send winch line product, which wind in and out of winches (one a ? oat up and down a moored spar, motion which is used to to three, depending on power requirements) as the sea surges.

The winding motion creates energy – up to 10kW of aver- generate power, could provide that power and communica- age, exportable power with a standard unit in a high sea state tions link. - converted to electricity on board the facility via a custom

OPT’s PB3 device would be suitable for lower power re- quirements and where it would be complicated to provide designed maintenance free gear box and a standard Siemens generator set. power other ways, such as remote areas, providing environ-

Even Hjetland, engineering manager for BOLT Sea Power, mental monitoring for engineering and development opera- tions and monitoring and control of low power subsea and says it’s a design that’s been worked on for more than 12 years but that now has experience operating offshore Norway, the topside equipment, Andrea Alessi, Offshore Renewable En- ergy Program Manager, ENI, told the Offshore Mediterranean UK and in the Paci? c (at a US Navy site off Hawaii). One of its next jobs is to provide a platform for a temporary 4G base