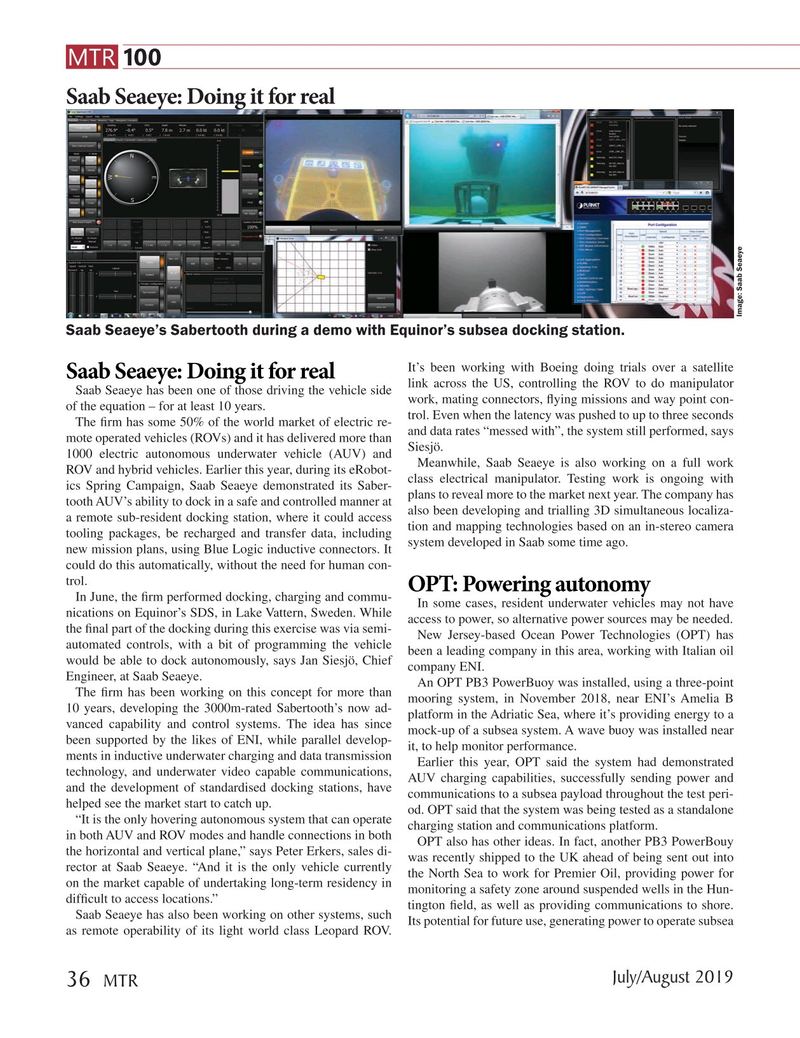 Saab Seaeye: Doing it for real

It’s been working with Boeing doing trials over a satellite

Saab Seaeye: Doing it for real link across the US, controlling the ROV to do manipulator

Saab Seaeye has been one of those driving the vehicle side work, mating connectors, ? ying missions and way point con- of the equation – for at least 10 years. trol. Even when the latency was pushed to up to three seconds

The ? rm has some 50% of the world market of electric re- and data rates “messed with”, the system still performed, says mote operated vehicles (ROVs) and it has delivered more than 1000 electric autonomous underwater vehicle (AUV) and Siesjö.

Meanwhile, Saab Seaeye is also working on a full work

ROV and hybrid vehicles. Earlier this year, during its eRobot- class electrical manipulator. Testing work is ongoing with ics Spring Campaign, Saab Seaeye demonstrated its Saber- plans to reveal more to the market next year. The company has tooth AUV’s ability to dock in a safe and controlled manner at also been developing and trialling 3D simultaneous localiza- a remote sub-resident docking station, where it could access tooling packages, be recharged and transfer data, including tion and mapping technologies based on an in-stereo camera system developed in Saab some time ago. new mission plans, using Blue Logic inductive connectors. It could do this automatically, without the need for human con- trol.

In June, the ? rm performed docking, charging and commu-

In some cases, resident underwater vehicles may not have nications on Equinor’s SDS, in Lake Vattern, Sweden. While access to power, so alternative power sources may be needed. the ? nal part of the docking during this exercise was via semi-

New Jersey-based Ocean Power Technologies (OPT) has automated controls, with a bit of programming the vehicle been a leading company in this area, working with Italian oil would be able to dock autonomously, says Jan Siesjö, Chief company ENI.

An OPT PB3 PowerBuoy was installed, using a three-point

The ? rm has been working on this concept for more than mooring system, in November 2018, near ENI’s Amelia B 10 years, developing the 3000m-rated Sabertooth’s now ad- platform in the Adriatic Sea, where it’s providing energy to a vanced capability and control systems. The idea has since mock-up of a subsea system. A wave buoy was installed near been supported by the likes of ENI, while parallel develop- it, to help monitor performance. ments in inductive underwater charging and data transmission

Earlier this year, OPT said the system had demonstrated technology, and underwater video capable communications, AUV charging capabilities, successfully sending power and and the development of standardised docking stations, have communications to a subsea payload throughout the test peri- helped see the market start to catch up. od. OPT said that the system was being tested as a standalone “It is the only hovering autonomous system that can operate charging station and communications platform.

in both AUV and ROV modes and handle connections in both

OPT also has other ideas. In fact, another PB3 PowerBouy the horizontal and vertical plane,” says Peter Erkers, sales di- was recently shipped to the UK ahead of being sent out into rector at Saab Seaeye. “And it is the only vehicle currently the North Sea to work for Premier Oil, providing power for on the market capable of undertaking long-term residency in monitoring a safety zone around suspended wells in the Hun- dif? cult to access locations.” tington ? eld, as well as providing communications to shore.

Saab Seaeye has also been working on other systems, such

Its potential for future use, generating power to operate subsea as remote operability of its light world class Leopard ROV.