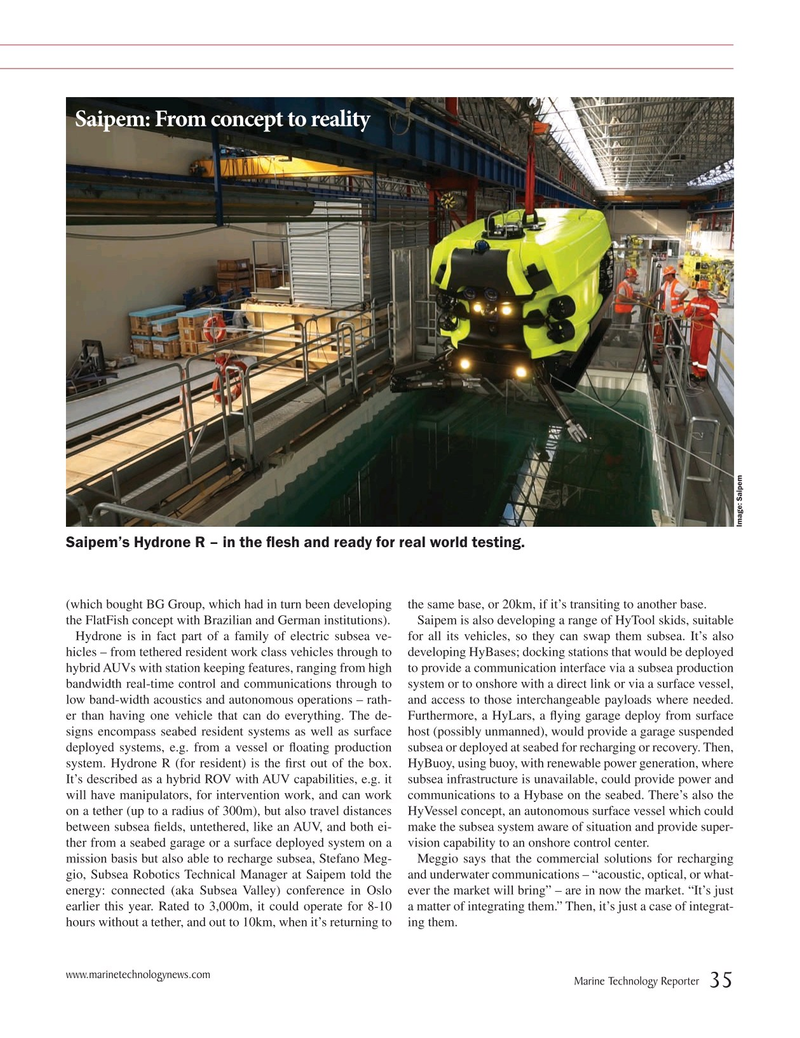 Saipem: From concept to reality

Saipem’s Hydrone R – in the ? esh and ready for real world testing. (which bought BG Group, which had in turn been developing the same base, or 20km, if it’s transiting to another base. the FlatFish concept with Brazilian and German institutions). Saipem is also developing a range of HyTool skids, suitable

Hydrone is in fact part of a family of electric subsea ve- for all its vehicles, so they can swap them subsea. It’s also hicles – from tethered resident work class vehicles through to developing HyBases; docking stations that would be deployed hybrid AUVs with station keeping features, ranging from high to provide a communication interface via a subsea production bandwidth real-time control and communications through to system or to onshore with a direct link or via a surface vessel, low band-width acoustics and autonomous operations – rath- and access to those interchangeable payloads where needed. er than having one vehicle that can do everything. The de- Furthermore, a HyLars, a ? ying garage deploy from surface signs encompass seabed resident systems as well as surface host (possibly unmanned), would provide a garage suspended deployed systems, e.g. from a vessel or ? oating production subsea or deployed at seabed for recharging or recovery. Then, system. Hydrone R (for resident) is the ? rst out of the box. HyBuoy, using buoy, with renewable power generation, where

It’s described as a hybrid ROV with AUV capabilities, e.g. it subsea infrastructure is unavailable, could provide power and will have manipulators, for intervention work, and can work communications to a Hybase on the seabed. There’s also the on a tether (up to a radius of 300m), but also travel distances HyVessel concept, an autonomous surface vessel which could between subsea ? elds, untethered, like an AUV, and both ei- make the subsea system aware of situation and provide super- ther from a seabed garage or a surface deployed system on a vision capability to an onshore control center.

mission basis but also able to recharge subsea, Stefano Meg- Meggio says that the commercial solutions for recharging gio, Subsea Robotics Technical Manager at Saipem told the and underwater communications – “acoustic, optical, or what- energy: connected (aka Subsea Valley) conference in Oslo ever the market will bring” – are in now the market. “It’s just earlier this year. Rated to 3,000m, it could operate for 8-10 a matter of integrating them.” Then, it’s just a case of integrat- hours without a tether, and out to 10km, when it’s returning to ing them.