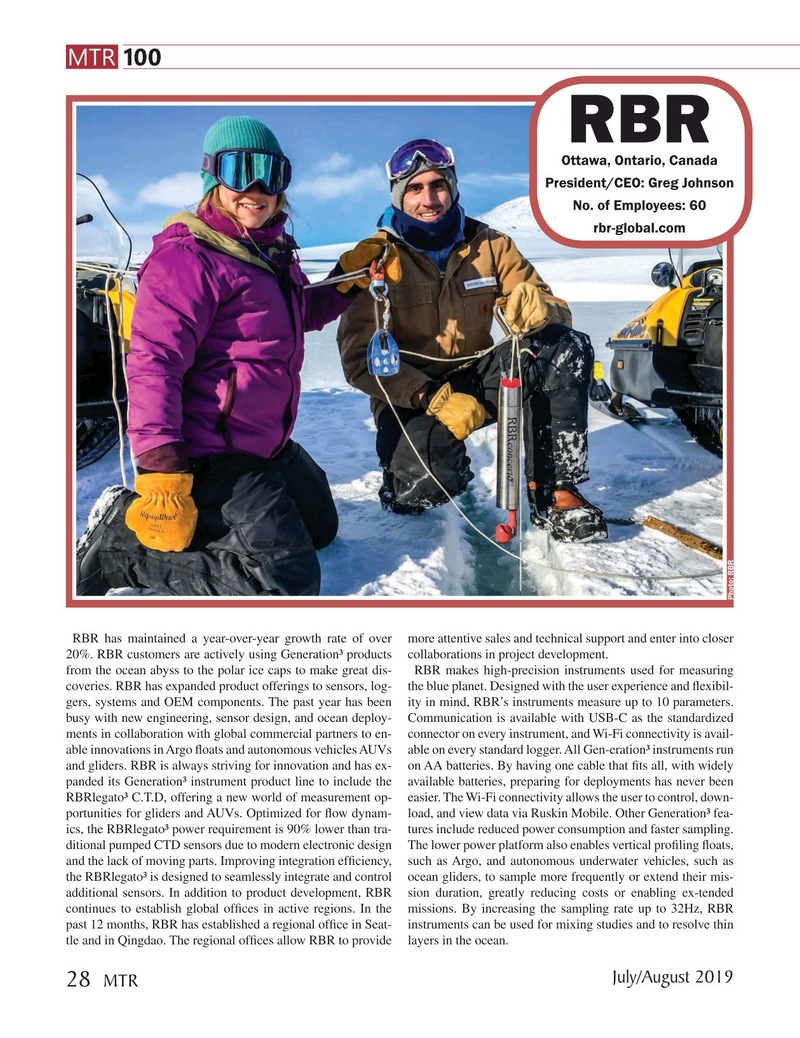 RBR has maintained a year-over-year growth rate of over more attentive sales and technical support and enter into closer 20%. RBR customers are actively using Generation³ products collaborations in project development.

from the ocean abyss to the polar ice caps to make great dis- RBR makes high-precision instruments used for measuring coveries. RBR has expanded product offerings to sensors, log- the blue planet. Designed with the user experience and ? exibil- gers, systems and OEM components. The past year has been ity in mind, RBR’s instruments measure up to 10 parameters. busy with new engineering, sensor design, and ocean deploy- Communication is available with USB-C as the standardized ments in collaboration with global commercial partners to en- connector on every instrument, and Wi-Fi connectivity is avail- able innovations in Argo ? oats and autonomous vehicles AUVs able on every standard logger. All Gen-eration³ instruments run and gliders. RBR is always striving for innovation and has ex- on AA batteries. By having one cable that ? ts all, with widely panded its Generation³ instrument product line to include the available batteries, preparing for deployments has never been

RBRlegato³ C.T.D, offering a new world of measurement op- easier. The Wi-Fi connectivity allows the user to control, down- portunities for gliders and AUVs. Optimized for ? ow dynam- load, and view data via Ruskin Mobile. Other Generation³ fea- ics, the RBRlegato³ power requirement is 90% lower than tra- tures include reduced power consumption and faster sampling. ditional pumped CTD sensors due to modern electronic design The lower power platform also enables vertical pro? ling ? oats, and the lack of moving parts. Improving integration ef? ciency, such as Argo, and autonomous underwater vehicles, such as the RBRlegato³ is designed to seamlessly integrate and control ocean gliders, to sample more frequently or extend their mis- additional sensors. In addition to product development, RBR sion duration, greatly reducing costs or enabling ex-tended continues to establish global of? ces in active regions. In the missions. By increasing the sampling rate up to 32Hz, RBR past 12 months, RBR has established a regional of? ce in Seat- instruments can be used for mixing studies and to resolve thin tle and in Qingdao. The regional of? ces allow RBR to provide layers in the ocean.