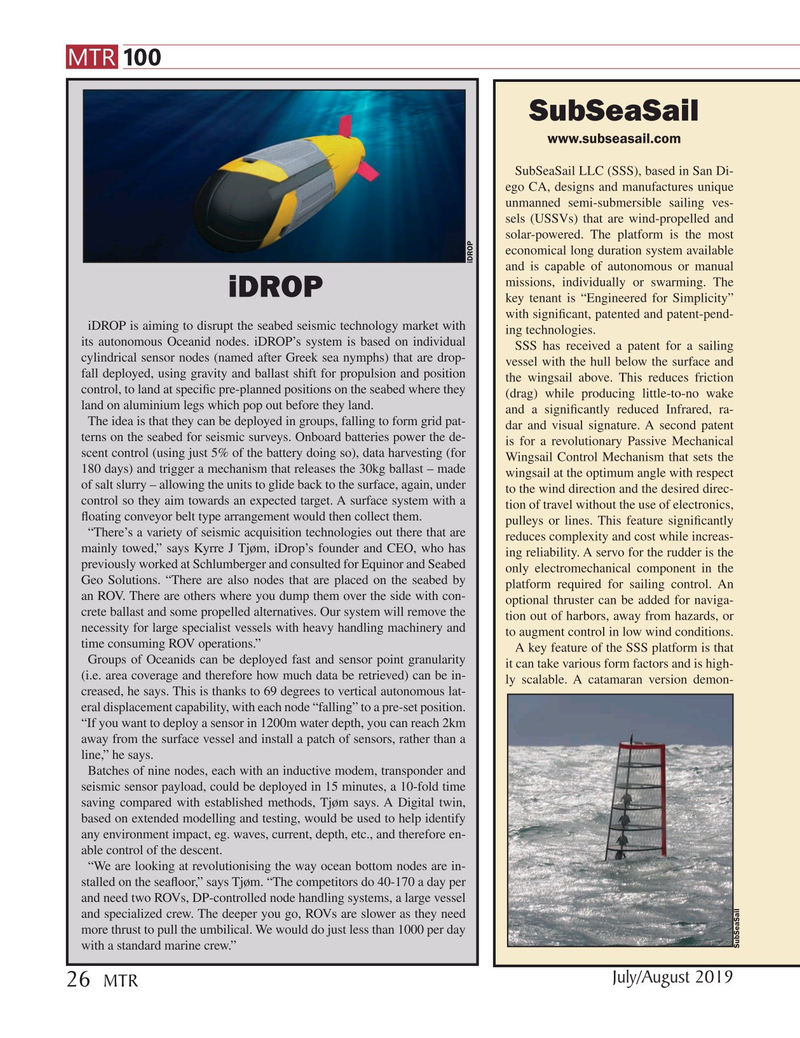 SubSeaSail LLC (SSS), based in San Di- ego CA, designs and manufactures unique unmanned semi-submersible sailing ves- sels (USSVs) that are wind-propelled and solar-powered. The platform is the most economical long duration system available iDROP and is capable of autonomous or manual missions, individually or swarming. The iDROP key tenant is “Engineered for Simplicity” with signi? cant, patented and patent-pend- iDROP is aiming to disrupt the seabed seismic technology market with ing technologies.

its autonomous Oceanid nodes. iDROP’s system is based on individual

SSS has received a patent for a sailing cylindrical sensor nodes (named after Greek sea nymphs) that are drop- vessel with the hull below the surface and fall deployed, using gravity and ballast shift for propulsion and position the wingsail above. This reduces friction control, to land at speci? c pre-planned positions on the seabed where they (drag) while producing little-to-no wake land on aluminium legs which pop out before they land. and a signi? cantly reduced Infrared, ra-

The idea is that they can be deployed in groups, falling to form grid pat- dar and visual signature. A second patent terns on the seabed for seismic surveys. Onboard batteries power the de- is for a revolutionary Passive Mechanical scent control (using just 5% of the battery doing so), data harvesting (for

Wingsail Control Mechanism that sets the 180 days) and trigger a mechanism that releases the 30kg ballast – made wingsail at the optimum angle with respect of salt slurry – allowing the units to glide back to the surface, again, under to the wind direction and the desired direc- control so they aim towards an expected target. A surface system with a tion of travel without the use of electronics, ? oating conveyor belt type arrangement would then collect them. pulleys or lines. This feature signi? cantly “There’s a variety of seismic acquisition technologies out there that are reduces complexity and cost while increas- mainly towed,” says Kyrre J Tjøm, iDrop’s founder and CEO, who has ing reliability. A servo for the rudder is the previously worked at Schlumberger and consulted for Equinor and Seabed only electromechanical component in the

Geo Solutions. “There are also nodes that are placed on the seabed by platform required for sailing control. An an ROV. There are others where you dump them over the side with con- optional thruster can be added for naviga- crete ballast and some propelled alternatives. Our system will remove the tion out of harbors, away from hazards, or necessity for large specialist vessels with heavy handling machinery and to augment control in low wind conditions. time consuming ROV operations.”

A key feature of the SSS platform is that

Groups of Oceanids can be deployed fast and sensor point granularity it can take various form factors and is high- (i.e. area coverage and therefore how much data be retrieved) can be in- ly scalable. A catamaran version demon- creased, he says. This is thanks to 69 degrees to vertical autonomous lat- eral displacement capability, with each node “falling” to a pre-set position. “If you want to deploy a sensor in 1200m water depth, you can reach 2km away from the surface vessel and install a patch of sensors, rather than a line,” he says.

Batches of nine nodes, each with an inductive modem, transponder and seismic sensor payload, could be deployed in 15 minutes, a 10-fold time saving compared with established methods, Tjøm says. A Digital twin, based on extended modelling and testing, would be used to help identify any environment impact, eg. waves, current, depth, etc., and therefore en- able control of the descent. “We are looking at revolutionising the way ocean bottom nodes are in- stalled on the sea? oor,” says Tjøm. “The competitors do 40-170 a day per and need two ROVs, DP-controlled node handling systems, a large vessel and specialized crew. The deeper you go, ROVs are slower as they need more thrust to pull the umbilical. We would do just less than 1000 per day

SubSeaSail with a standard marine crew.”