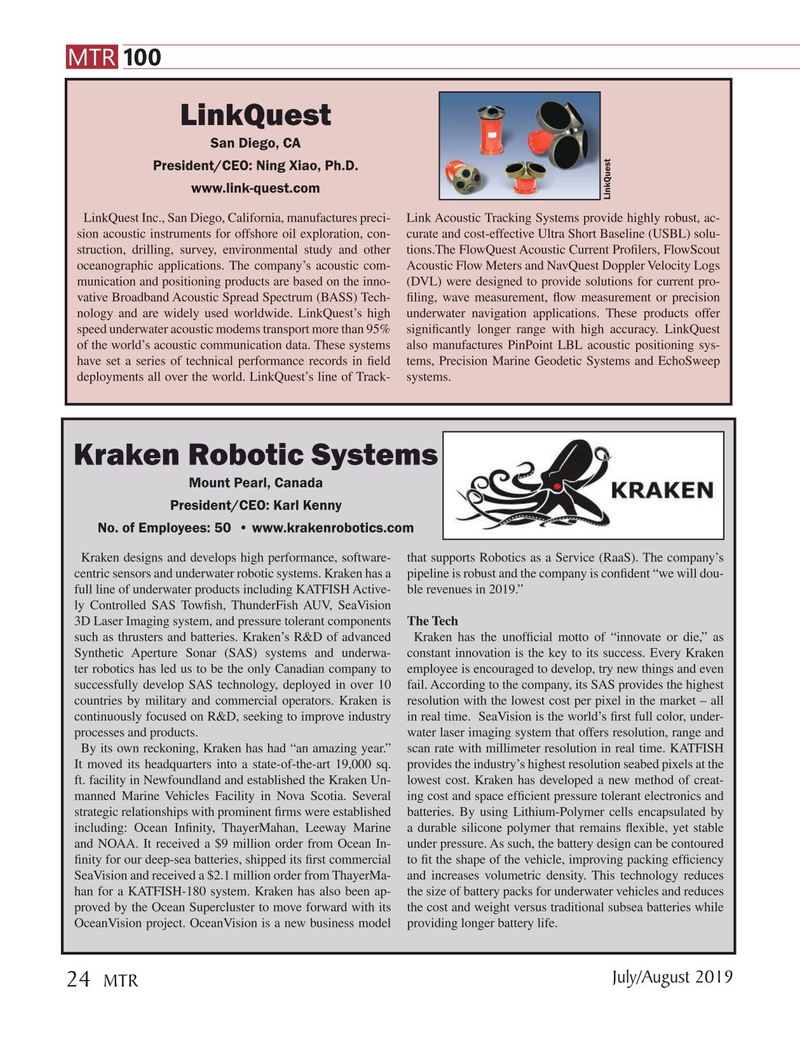 Kraken designs and develops high performance, software- that supports Robotics as a Service (RaaS). The company’s centric sensors and underwater robotic systems. Kraken has a pipeline is robust and the company is con? dent “we will dou- full line of underwater products including KATFISH Active- ble revenues in 2019.” ly Controlled SAS Tow? sh, ThunderFish AUV, SeaVision 3D Laser Imaging system, and pressure tolerant components The Tech such as thrusters and batteries. Kraken’s R&D of advanced Kraken has the unof? cial motto of “innovate or die,” as

Synthetic Aperture Sonar (SAS) systems and underwa- constant innovation is the key to its success. Every Kraken ter robotics has led us to be the only Canadian company to employee is encouraged to develop, try new things and even successfully develop SAS technology, deployed in over 10 fail. According to the company, its SAS provides the highest countries by military and commercial operators. Kraken is resolution with the lowest cost per pixel in the market – all continuously focused on R&D, seeking to improve industry in real time. SeaVision is the world’s ? rst full color, under- processes and products. water laser imaging system that offers resolution, range and

By its own reckoning, Kraken has had “an amazing year.” scan rate with millimeter resolution in real time. KATFISH

It moved its headquarters into a state-of-the-art 19,000 sq. provides the industry’s highest resolution seabed pixels at the ft. facility in Newfoundland and established the Kraken Un- lowest cost. Kraken has developed a new method of creat- manned Marine Vehicles Facility in Nova Scotia. Several ing cost and space ef? cient pressure tolerant electronics and strategic relationships with prominent ? rms were established batteries. By using Lithium-Polymer cells encapsulated by including: Ocean In? nity, ThayerMahan, Leeway Marine a durable silicone polymer that remains ? exible, yet stable and NOAA. It received a $9 million order from Ocean In- under pressure. As such, the battery design can be contoured ? nity for our deep-sea batteries, shipped its ? rst commercial to ? t the shape of the vehicle, improving packing ef? ciency

SeaVision and received a $2.1 million order from ThayerMa- and increases volumetric density. This technology reduces han for a KATFISH-180 system. Kraken has also been ap- the size of battery packs for underwater vehicles and reduces proved by the Ocean Supercluster to move forward with its the cost and weight versus traditional subsea batteries while