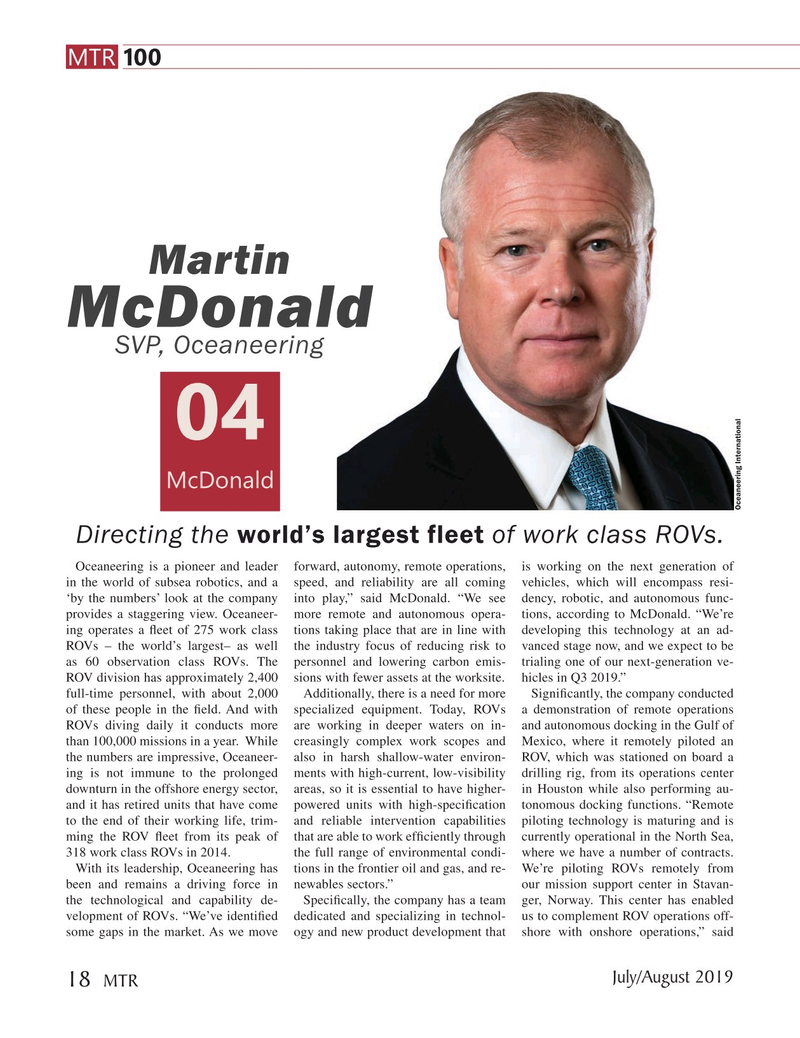 Oceaneering is a pioneer and leader forward, autonomy, remote operations, is working on the next generation of in the world of subsea robotics, and a speed, and reliability are all coming vehicles, which will encompass resi- ‘by the numbers’ look at the company into play,” said McDonald. “We see dency, robotic, and autonomous func- provides a staggering view. Oceaneer- more remote and autonomous opera- tions, according to McDonald. “We’re ing operates a ? eet of 275 work class tions taking place that are in line with developing this technology at an ad-

ROVs – the world’s largest– as well the industry focus of reducing risk to vanced stage now, and we expect to be as 60 observation class ROVs. The personnel and lowering carbon emis- trialing one of our next-generation ve-

ROV division has approximately 2,400 sions with fewer assets at the worksite. hicles in Q3 2019.” full-time personnel, with about 2,000 Additionally, there is a need for more Signi? cantly, the company conducted of these people in the ? eld. And with specialized equipment. Today, ROVs a demonstration of remote operations

ROVs diving daily it conducts more are working in deeper waters on in- and autonomous docking in the Gulf of than 100,000 missions in a year. While creasingly complex work scopes and Mexico, where it remotely piloted an the numbers are impressive, Oceaneer- also in harsh shallow-water environ- ROV, which was stationed on board a ing is not immune to the prolonged ments with high-current, low-visibility drilling rig, from its operations center downturn in the offshore energy sector, areas, so it is essential to have higher- in Houston while also performing au- and it has retired units that have come powered units with high-speci? cation tonomous docking functions. “Remote to the end of their working life, trim- and reliable intervention capabilities piloting technology is maturing and is ming the ROV ? eet from its peak of that are able to work ef? ciently through currently operational in the North Sea, 318 work class ROVs in 2014. the full range of environmental condi- where we have a number of contracts.

With its leadership, Oceaneering has tions in the frontier oil and gas, and re- We’re piloting ROVs remotely from been and remains a driving force in newables sectors.” our mission support center in Stavan- the technological and capability de- Speci? cally, the company has a team ger, Norway. This center has enabled velopment of ROVs. “We’ve identi? ed dedicated and specializing in technol- us to complement ROV operations off- some gaps in the market. As we move ogy and new product development that shore with onshore operations,” said