Wave-generated power could be considered the Rodney Dangerfield of offshore renewable energy sources; it gets no respect. There have been a number of high-profile, expensive failures that have conspired to give the sector a poor reputation despite a number of engineering advances. A new entrant is SurfWEC offering a patented “surf-making” Wave Energy Converter which has been in development since 2007. Its developers promise it will stand out from the field and perform where others have failed. How? The SurfWEC design improves upon a generation of 'lessons learned,' and more importantly it makes its own surf.

Renewable energy production is officially 'hot', as a number of engineering advances and government subsidies have conspired to help deploy, test, and prove in real-world conditions the viability of various systems. While solar and wind power have jumped out as early leaders, there is a renewed push to turn ocean wave power into a viable, renewable source of power and stored energy. A new entrant is SurfWEC LLC, which is aiming to become the 'go to' in the wave energy category, both as a stand-alone system and as added power source, energy storage, and wave damping units co-located with existing or future offshore wind farms.

Meet the “Old New” Company
A driving force behind the new performance projections for Wave Energy Converters (WECs) is Martin & Ottaway, a New Jersey-based marine engineering firm that has been in continuous operation since 1875 which incubated SurfWEC LLC in December of 2018. SurfWEC, with university and industry partners -- Stevens Institute of Technology, ABB, Airline Hydraulics, Bosch-Rexroth, Deeptek, HYDAC, ISCO Pipe, Wire Co./Lankhorst Ropes, and others – is working to develop WECs using patented features that are expected to increase energy recovery rates by an order of magnitude as stand-alone units or integrated with legacy WEC systems.

The SurfWEC system is also designed to avoid wave damage associated with hurricanes, equipment located in surf zones, and stationary mooring systems offshore via technology that conquers the challenge of highly variable wave sizes. To put it simply, it does this with a patented variable-depth shoaling feature, invented by Michael Raftery, SurfWEC Chief Technology Officer (CTO) while performing research at Stevens Institute of Technology from 2004 to 2012. The technology essentially allows offshore waves to be converted to surging surf waves, allowing much more effective wave energy recovery.

Meeting with Raftery in Martin & Ottaway's Tinton Falls, New Jersey office, it becomes immediately clear that this system and its development are a labor of love for the inventor who’s long-term goal is to end human dependence on fossil fuels. The patent was submitted in 2007 and issued in 2012. It is was created while Raftery worked at Stevens Institute of Technology, the renowned engineering school, which paid for and owns the patent rights to the system, while SurfWEC has an exclusive license option agreement in place to use this technology.
“I think the biggest perceptions to overcome are the perceptions that wave energy conversion is inefficient, and that WEC units cannot be designed and fabricated with buoyant integrity similar to Boston WhalerTM boats, these are the design criteria specifically required to bring wave energy conversion to the utility level,” said Raftery. “There have been four major failures in the industry that really put investors off. The sinking of the Advanced Research Technologies/Wavegen “Osprey” in 1995, the sinking of the Finavera “Aquabuoy” in 2007, the sinking of the Trident “DECM” in 2009, and the recent sinking of the Wello OY “Penguin” in 2019.” 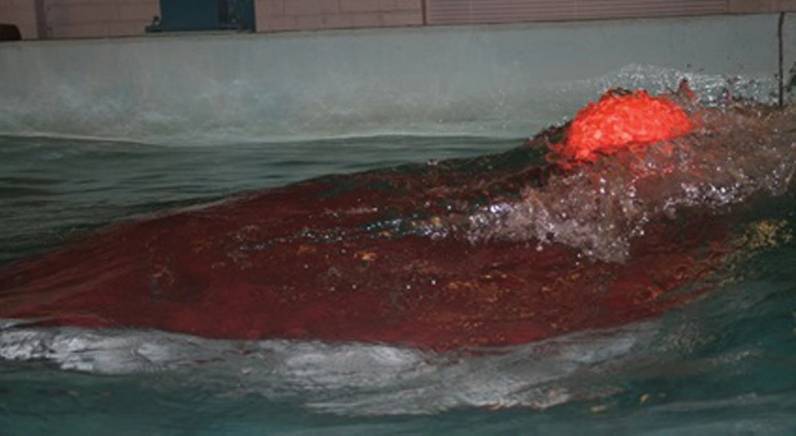 Raftery said that those failures collectively cost many millions of dollars while earning the WEC industry a bad reputation. He said early investor reactions to SurfWEC have been “you’re probably just like those other systems.”

But Raftery contends that SurfWEC has learned from past incidents, and he said that creating a system with “buoyant integrity” was number one on his list. To this end the wave energy system features foam-filled compartments making it virtually unsinkable. “We’ve addressed all of the failures in the industry with this one design.”

Also, creating a system that is 'smart', a system able to adjust itself continually to maximize and efficiently convert the ocean's motion into power, was central to success. For this, the SurfWEC team relies on a neural network.

“Neural networks are a way to respond to things that are not clearly, easily defined,” said van Hemmen. “If I have a perfect sine wave, I can calculate and design something that will respond to this perfect sine wave as the wave length and wave height changes. But ocean waves are messy. Neural networks take input from different sensors that go together helps the system ‘learn’. It is simply a response mechanism.”
The system is designed to be flexible too, and in principle the SurfWEC system can be placed anywhere where there are ocean waves and water depths are from 135 to 1000 ft. It is, in fact, a major design feather in SurfWEC's cap that the system need not be placed directly in the surf zone to work. “You don’t have to design different devices for different locations. We can put them anywhere, and it’s a one-size-fits all solution, and the neural network will keep the variable-depth platform at the optimal depth at all times.” said van Hemmen. 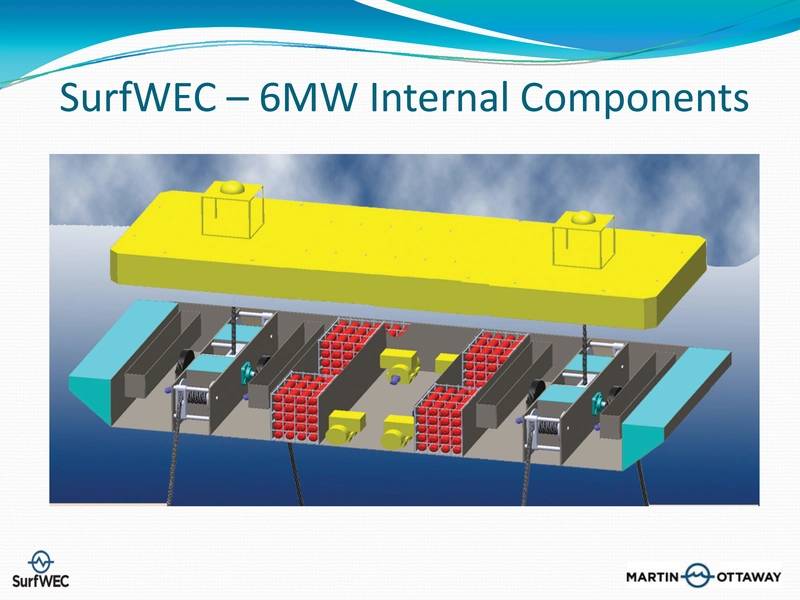 Images Courtesy:  SurfWEC LLC.The Path Ahead
Anyone who has worked in the field of renewable energy knows that the path from inventor's workbench to utility level performance is neither straight, short or cheap. The SurfWEC platform has already been under development for a dozen years, and Raftery reckons it will be another four to five years to bring it through sea trials.

“The next step is to get a scale model tested at the Ohmsett facility in Leonardo, New Jersey, at approximately 15:1 scale,” said Raftery. “We’ll take those performance numbers, then we’ll build a skid platform for the power take-off system, and we will bench test. After that we’ll make adjustments to the designs based on those two datasets, to be followed by a full-scale prototype and sea trials.”
While time is one element, money is another, and Rik F. van Hemmen, P.E., owner of Martin & Ottaway has put the price tag today at $20 million to bring the system through sea trials, with (approximately) $2m for bench testing, $1m for computer modeling, $1m for a scale model, about $12m for the final prototype unit, and $4m for two-year sea trials.

“I’ve just submitted a White Paper to the Office of Naval Research for that full budget,” said van Hemmen. “On the commercial side we will approach venture capital sources for funding, too. Then we have DOE applications in for subsystem development.”

Think Global, Act (NJ) Local
“Certain projects are so big that they need a national or a global view and presence. This particular technology does not require that huge amount of investment,” said van Hemmen. “This makes it inherently more efficient to build and run a local project, and if you can do that your chance of success inherently goes up.”

According to van Hemmen the stars are seemingly aligned for this project, as New Jersey offers “this weird hotbed for technological innovation. New Jersey has the waterfront, it has the transportation capacity, it has the education … the project size is right for it to be developed in New Jersey.”

One of the key players is Ohmsett in Leonardo, New Jersey, situated on Raritan Bay. This is a world-class tank testing facility situated directly in an area that could prove ideal for real-world testing, as van Hemmen reasons that the waves in the protected portions of Raritan bay are right on scale with the 15:1 model as the ocean waves would be for the full-scale model.

While political (to get the permitting to moor the system for real-world trials) and funding issues are rarely easy to navigate, van Hemmen, who went to Harvard Business School, said that he would be shocked if the organization can’t build support among the utilities and the politicians. “The numbers (cost per kWh) are there, and they are convincing.”

In fact van Hemmen, always the engineer first, sees the biggest challenge of delivering the system to utility scale as quite simple: Rope. “If the money exists, the biggest challenge will be the reliability of the rope yanking system. That is the challenge that my mind will be around day and night,” he said. “I’m convinced that we can get it to work, but this is the one technical challenge that give me the cold sweat of the engineer. Rope technology has advanced tremendously, but that is the point where a lot of energy will go in. Fortunately the rope issue is not and end-all as flapper/surge type devices mounted to the top deck of the variable-depth platform may be commercially viable as well.” 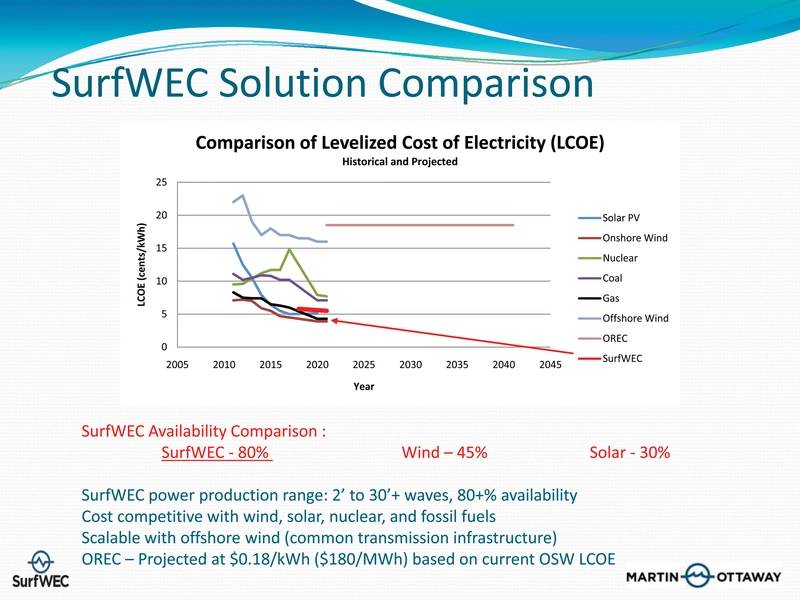 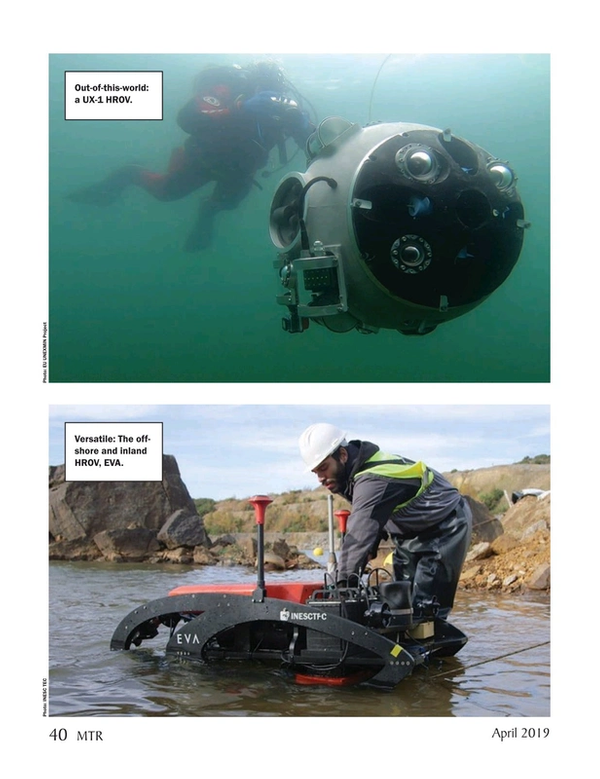