Great Lakes Winter Supply Chain – A Cause for Concern

As the temperatures start their annual decline on the Great Lakes, an icy chill is in the air. Shipping companies across the lakes are rushing to get final loads of critical raw materials from the northern lakes to the manufacturing facilities on the lower lakes. The gales of November began blowing in October this year, tightening the constraint on the remaining days before the large navigational lock in Sault Ste. Marie, Mich. will close for the season and shipping virtually halts.

While high winds and seas can only be avoided, ice can be effectively managed by the U.S. Coast Guard (USCG) and Canadian Coast Guard (CCG) to move maritime traffic efficiently. The problem remains that neither the USCG nor CCG have an adequate icebreaking fleet to cover the vast expanse of the binational Great Lakes Navigation System.

The St. Lawrence Seaway continues to push their opening dates earlier and closure dates later, which adds stress to an already inadequately resourced icebreaking mission. With only 11 (two CCG and nine USCG) icebreakers, it is impossible to effectively cover all the areas requiring icebreaking which extend over 2,300 miles from Duluth, Minn. to the Atlantic Ocean and the 94,000 square miles just in the lakes and connecting waterways themselves.

During this past year’s ice season, the U.S.-flagged Great Lakes shipping industry lost the equivalent of a month of work due to delays in ice covered waters. Some 1.645 million tons of cargo carrying capacity was delayed for 680 hours, or 28 days, due to ice conditions on Lake Superior, Lake Huron, Lake Michigan and in Green Bay and a lack of icebreakers to meet the needs of commerce.

Over the course of the past eight years, the economic impacts due to inadequate icebreaking on the Great Lakes have been staggering. Over 10,000 jobs lost and more than $2 billion in economic activity frozen as cargo of mainly iron ore and limestone sat idle in port or stuck in various waterways across the region.

“It amazes me that a cargo container stuck in Chesapeake Bay or in the Suez Canal gets worldwide attention and that happens on the Great Lakes every year. The loss of one day of shipping is tremendous, but a month is devasting. Imagine if highways in the northern states didn’t have enough snowplows to keep traffic moving during frequent winter storms and sat on the road for a month…it is unacceptable,” stated Jim Weakley, President of the Great Lakes Maritime Task Force.

The problem is only getting worse with the USCG and CCG fleet aging out and suffering casualties at an alarming rate. Over 60% of the government icebreakers stationed on the Great Lakes are over 40 years old. During this past year’s average winter, the USCG reported a loss of 116 days of icebreaking operations due to engine failures and other mechanical issues. During the harsher winters of 2018 and 2019, the number climbed to 246 days lost and 182 days lost, respectively. No bench support exists especially when ice conditions exceed the smaller icebreakers capability. With only one heavy icebreaker on the Great Lakes, the USCG is woefully under prepared to maintain a resilient and dependable marine transportation system during the winter.

Getting to this level of paralysis has been facilitated by incomplete icebreaking mission performance measures. The USCG only reports their ability to keep four small connecting waterways on the Great Lakes open to navigation during the winter. The connecting waterways account for only a small portion of vessels transit to and from the ports of the Great Lakes. A perfect example occurred last year in eastern Lake Superior when multiple commercial vessels were stranded for over three days. The days lost were not reported to Congress because the area where the vessels were stuck was not considered measurable by the current USCG performance goals. Imagine being on an interstate stuck in a snowbank and being told by the highway department that we only measure our ability to keep the onramps open, your inability to move doesn’t count.

While progress fixing the icebreaking issue has been slow, it is moving forward thanks to key Great Lakes Senators and Congressional Representatives. Over the past year, both the current Commandant of the U.S. Coast Guard and the former Commandant testified before the Senate Commerce Committee acknowledging the need for another heavy Great Lakes icebreaker. In addition, the Great Lakes Winter Commerce Act is included in the House and Senate versions of the Coast Guard Authorization Bill, which authorizes full funding for the new icebreaker, mandates transparent and accurate performance measures, and commissions a study by the Government Accountability Office to examine the impacts and needs for additional U.S. Coast Guard icebreakers on the Great Lakes. There is hope these actions will keep the pilot light of the North American economy lit with a resilient and reliable Great Lakes Navigation System. 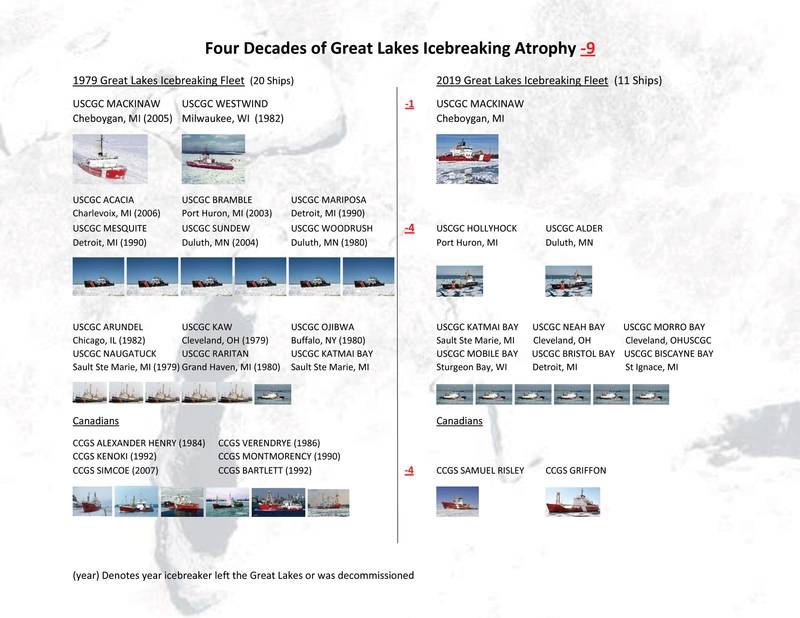 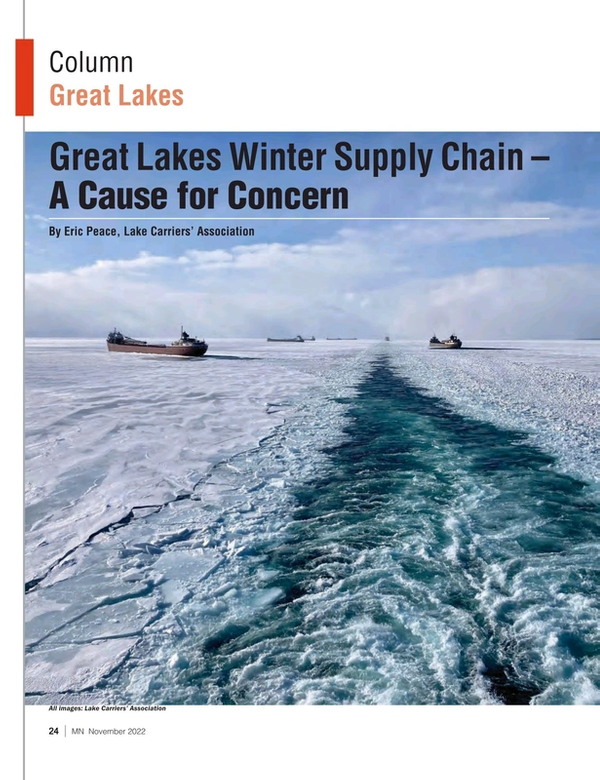 Read Great Lakes Winter Supply Chain – A Cause for Concern in Pdf, Flash or Html5 edition of November 2022 Marine News

Other stories from November 2022 issue