Infrastructure Improvements Set to Boost Efficiency at Lock and Dam 25

The list of projects on the United States’ inland waterways infrastructure to-do list is seemingly never-ending as the U.S. Army Corps of Engineers (USACE) continuously works to maintain, repair and, when possible, upgrade aging locks and dams throughout America’s vast network of navigable rivers.

But there’s been progress toward modernizing the system, especially in recent years amid steadily rising annual appropriations that fund the Corps’ Civil Works mission, and Construction and Operations & Maintenance (O&M) accounts funded at historic levels.

A major boost came in 2021 via the passage of the Infrastructure Investment and Jobs Act (IIJA), which according to Tracy Zea, president and CEO of the Waterways Council Inc., “provided a once-in-a-generation opportunity to see real progress to build locks and dams and to upgrade the rest of America’s long-neglected infrastructure.”

Among other things, IIJA included a $829.1 million toward the Corps’ $7.9 billion, 50-year Navigation and Ecosystem Sustainability Program (NESP), which consists of more than 1,000 projects to improve navigation delays and restore ecosystems along the Upper Mississippi River. Specifically, Congress allocated $829.1 million for two NESP projects, including $732 million for construction of a new 1,200-foot lock chamber at Lock and Dam 25 near Winfield, Mo., and $97.1 million for fish passage improvement projects at Lock and Dam 22 near Savertooth, Mo.

Conceptualized in the late 1990s, it wasn’t until the Water Resources Development Act (WRDA) of 2007 that NESP was authorized as a first-of-its-kind Corps program to address both ecosystem and navigational projects together under the same umbrella. About a decade later, Congress allocated some funding for the program mainly to start initial designs for its projects, but years went by without the funding for physical construction to move forward. NESP’s inclusion in the IIJA finally cleared way for projects to move beyond the design stage, allowing construction contracts to be awarded and project builds to begin.

More good news followed in March when an additional $45.1 million came through Congressionally directed spending to advance NESP projects, and the program received an additional $12.2 million through the Corps’ FY 2022 work plan to continue to advance additional projects.

New chamber at Lock and Dam 25
For the barging industry, improvements at Lock and Dam 25 will go a long way toward making river transport more efficient, ultimately increasing the competitiveness of American farm products in international markets. The project, which has been long-awaited and is now funded to completion, will see a new 1,200-foot lock chamber built adjacent to the site’s existing 600-foot chamber. This enables larger tows to pass through without having to be broken apart, saving precious time while also increasing safety for deckhands. According to Marty Hettel, vice president of government affairs at American Commercial Barge Line (ACBL), an expanded 1,200-foot chamber will reduce transit times by about 2.5 hours.

Lock and Dam 25 is one of seven 1,200-foot lock chamber projects at existing 600-foot lock and dam sites authorized by WRDA 2007. Hettel serves on the Inland Waterways User Board, which makes recommendations to the Army and to Congress on investment priorities. He said the project at 25 was a top priority. “Safety and efficiency go hand-in-hand, especially when we’re building these new lock projects,” he said. “The more efficient we become with these new 1,200-foot lock chambers, the safer it’s going to be for our professional mariners.” 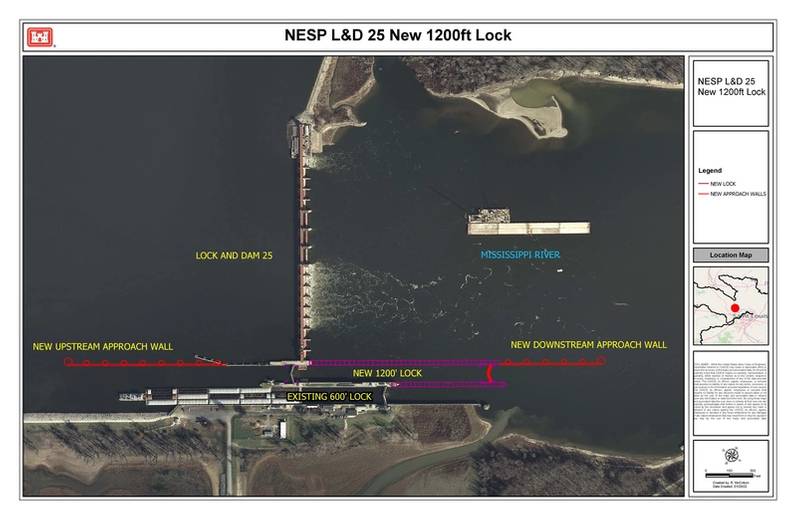 The complex project includes design and construction of a new 1,200-foot pile-founded lock chamber to be constructed on the downstream side of the existing auxiliary miter gate bay, as well as a new upstream, ported approach wall and a downstream approach wall designed to block flow through the wall. The existing 600-foot lock will remain in operation during the design and construction of the new lock and will become an auxiliary lock chamber after completion. This adds redundancy by allowing navigation to continue when one of the locks goes down or while maintenance or repairs are underway. The project also includes associated channel work, relocations and site-specific environmental mitigation.

Jose Lopez, project manager for the NESP lock and dam 25 project, said the Corps’ will take a two-phase approach to help minimize risk. He said the Corps hopes to use learnings and contractor feedback from phase one to help inform engineering and execution decisions for phase two.

Lopez said the Corps aims to award the phase one contract in 2022, clearing way for construction to commence as early as late winter or early spring 2023. The timeline for phase two remains uncertain.

“Our goal is to design and construct this as efficiently as possible. We are hyper-focused on the fact that we received this appropriation from Congress to go out and design and build the project,” Lopez said. “We’ve got our foot down on the gas doing all of the work that we need to do to get that constructed.”

Another project team objective, Lopez said, is to complete the upgrades cost-effectively. “Everybody’s aware of the current market conditions and how things are going. The labor market is super tight. Inflation is up. It’s kind of a topsy-turvy world. We’re very cognizant of cost.”

The other objects are to maintain quality and minimize impact and maximize predictability during construction. “One of the biggest challenges that this specific project has is the location of the new 1,200-foot chamber,” Lopez said. “We are building the new chamber directly adjacent to an existing 600-foot chamber that’s over 80 years old and is going to continue to move traffic during construction. That has a lot of challenges associated with it. We’re very sensitive to that.”

It will be a team effort to ensure the project is completed in a way that makes sense for all parties involved, Lopez said. “The Corps, navigation industry stakeholders and the construction contractor are all going to have to be at the same table to talk about how that sequencing is going to work to ensure we build this project effectively and efficiently, but at the same time that we don’t impact the barge industry too bad. There’s going to be some shared risk in there that we have to work through.” 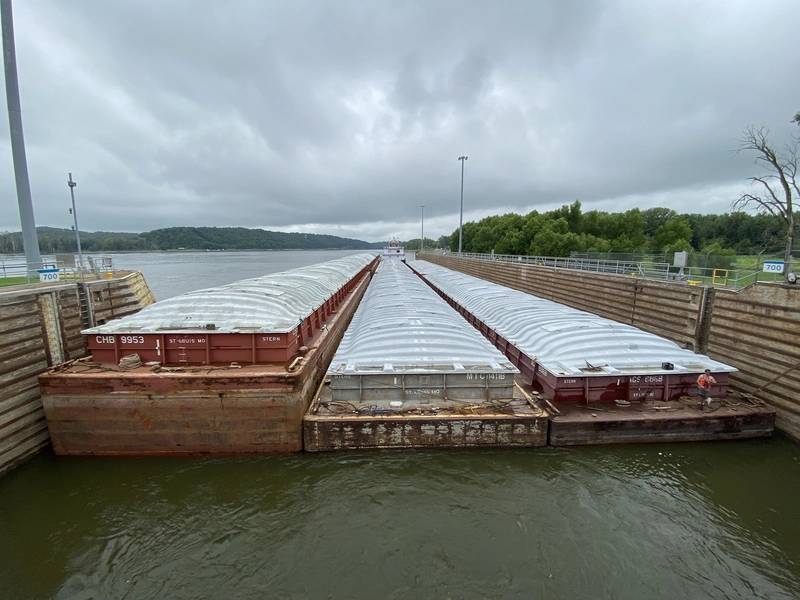 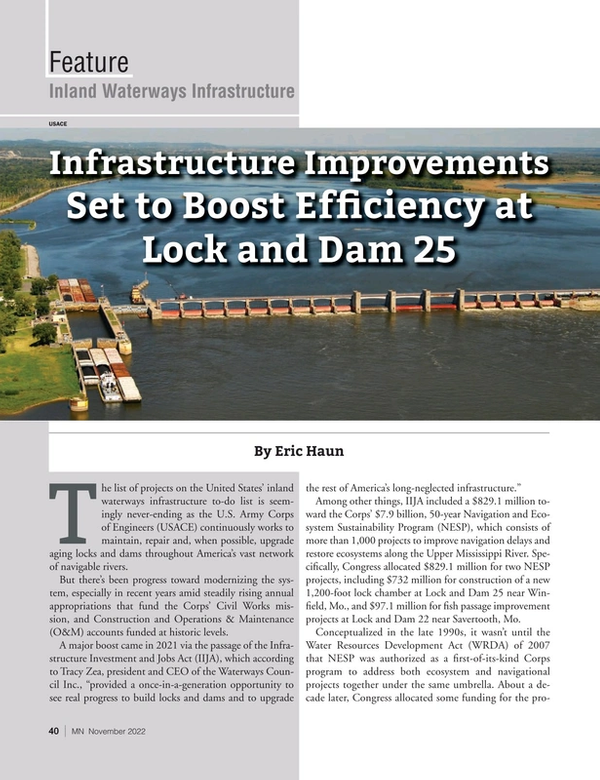 Other stories from November 2022 issue