US Shipyards Forge Ahead Through COVID-19

As the novel coronavirus and its impacts continue to spread across America, U.S. shipbuilders, by and large, continue to build. While most yards have been deemed essential to marine transportation and/or national security and have been able to maintain operations, the situation at and around every shipyard is different, and there are several builders across the country that have had to temporarily suspend activity. In either scenario, it’s far from business as usual for America’s shipbuilders who will be forced to navigate new waters in the months ahead.

Full disclosure: the information in this report is subject to change as situations rapidly develop. Nearly all news surrounding the COVID-19 pandemic is fast-moving, and statuses are likely to shift – and maybe even shift again – from the time this article is being written to the time this magazine prints.

Hectic, fluid and crazy are some of the words used by shipyard representatives when asked about the work situations at their facilities amid the coronavirus outbreak. But all tell Marine News they are diligently monitoring the situation and will adjust as necessary to ensure workers and their communities remain safe and healthy.

Marcia Blount, president of Blount Boats in Rhode Island, told Marine News on March 19 that construction activity is ongoing for three newbuild projects in the yard. A new ferry, Southern Cross, for South Ferry on Shelter Island, N.Y. is getting ready for sea trials ahead of scheduled delivery at the end of March 2020. Breaker II, a small tug for N.Y. Power Authority to pull boom across Niagara River to prevent ice from jamming hydroelectric equipment, is slated to be delivered in May 2020 when New York’s upstate canals open. Blount is also building an offshore wind crew transfer vessel (CTV) for Rhode Island Fast Ferry, to be delivered in November 2020.

Down the East Coast, on the Gulf of Mexico side of Florida, Eastern Shipbuilding has maintained “full operations building vessels”, Steve Berthold, VP of sales and marketing, told Marine News on March 20. Eastern is building the high-profile Offshore Patrol Cutter for the U.S. Coast Guard, with the series’ lead vessel scheduled to be delivered in 2022. The shipyard is wrapping up work on A. Thomas Higgins, the second of two 80-foot 5,100-horsepower Z-drive tugs for Bisso Offshore, after delivering the first in January this year. In addition, Eastern is building three 4,500-passenger Ollis-Class ferries for New York’s Staten Island Ferries. The first is scheduled to be delivered in fall 2020.

Activity has continued at VT Halter Marine in Pascagoula, Miss., where four U.S. Navy Auxiliary Personnel Lighter-Small berthing barges, the QLNG 4000 and its tug, the Q-Ocean Services, which together form an industry-first offshore liquefied natural gas (LNG) bunker articulated tug and barge (ATB), oceanographic research ship T-AGS67 and two LSVs for an unidentified customer are presently under construction. In the engineering stage is the long-awaited Polar Security Cutter for the U.S. Coast Guard.

“Customers are getting more cost conscious and expect to achieve lower system-lifecycle costs,” VT Halter CEO Ron Baczkowski told Marine News before oil prices dropped and the coronavirus outbreak swept across the U.S., but customers’ need for lower costs may become an even greater in the months ahead. “As a ship designer and builder, VT Halter Marine’s focus has been on developing vessels that require less manning, consume less fuel, allow a longer mean time between repairs, better coatings and protection, and built-in diagnostic maintenance.” 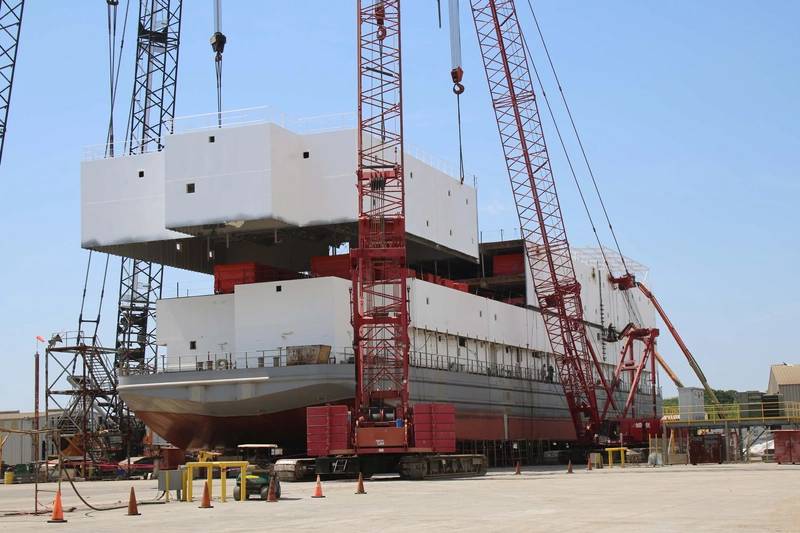 Conrad Shipyard, which delivered more than 60 vessels for commercial and government customers in 2019, is also up and running. The yard’s current backlog includes tank and deck barges, offshore tugs and two 6,000-horsepower towboats currently under construction. Robert A. Sampey II, Vice President Business Development, Conrad Shipyard, said, “We continue to pursue the inland vessel market as evolving customer needs, and new regulations drive changes to the design of these vessels. . . Other evolving markets that we continue to pursue are the LNG bunkering market and wind farm support equipment.”

Over the last six months, Metal Shark has delivered more than 100 vessels to customers in the U.S. and abroad, and the company continues to build for militaries, state and local law enforcement agencies, fire rescue operators, passenger vessel operators, pilot associations and more.

“The rapid onset of COVID-19 and the precipitous drop in the cost of oil have created question marks in many sectors,” said Metal Shark Co-owner and CEO Chris Allard. “We see our government work remaining solid, and, so far, our commercial business has remained strong, with continued interest and no cancellations.”

“Among our key aluminum projects currently underway are a wide range of military vessels varying in size from the mid 20-foot range up to a series of 85-foot patrol vessels. In 2020 we will announce a naval fleet order for high-speed offshore interdiction vessels larger than 50-foot. We continue to add fireboat customers at a rapid pace. Among the 15-plus fireboats currently under contract, we’ve got two 50-foot fireboats under construction for Miami Dade Fire Rescue, and a 70-fott fireboat being built for Canaveral Fire Rescue. We continue to build law enforcement vessels for multiple agencies, including multiple orders of our 26- and 28-foot Relentless center consoles standardized for the Florida Fish & Wildlife Conservation Commission. We will soon be announcing multiple additional law enforcement customers, we will be announcing the construction of another new pilot boat, and we will deliver a 158-foot catamaran excursion vessel to a private client.

“At our Alabama yard, which specializes in the construction of steel vessels, we will deliver the first of our series of 120- by 35-foot inland tow boats for Florida Marine Transporters, as well as an 80-foot Z-drive tugboat for North Carolina DOT.”

While shipbuilding has continued at Metal Shark, Allard said, “The economic impact of the COVID-19 situation has made us acutely aware of how many of our second and third-tier suppliers are located overseas, or depend on overseas supply. Already we have seen a disruption of internationally sourced materials. However, we will continue to react quickly, to innovate, and to leverage our engineering capability, serialized production methodologies, and economies of scale to support our customers through the challenging times ahead.”

“I think it would be foolish to think that, medium-term, the economic impacts of current events will not cause some level of disruption to our industry. Long term, I think the current events will drive a continued push for increased American manufacturing and supply independence.” Allard added. 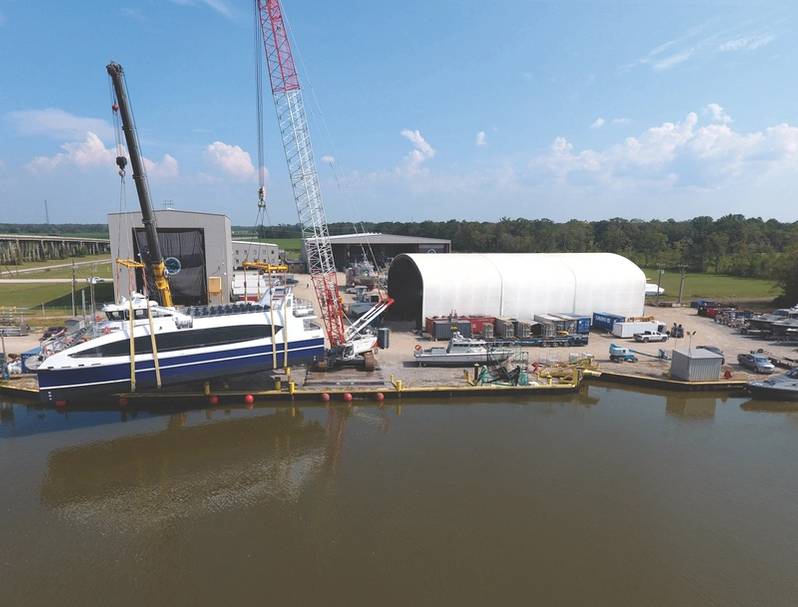 Among the many projects underway at Metal Shark’s yards is a series of newbuilds for NYC Ferry. (Photo: Metal Shark)

Great Lakes Shipyard has been able to continue building the fourth, fifth and sixth vessels in a series of Damen Stan 1907 Ice Class tugs for The Great Lakes Towing Company. Pennsylvania is in the commissioning phase and will enter service in April 2020, followed by Wisconsin slated for completion by mid-summer and the sixth, yet-to-be-named vessel scheduled to be completed in Spring 2021.

Kirsten Buccigrossi, Director, Marketing & Communications, The Great Lakes Group, said additional work looms on the horizon: “With the implementation of Subchapter M, we foresee the potential for significant tugboat construction and repair work, generally needed for operators to comply with the new regulations. Also, many government agencies (i.e., U.S. Coast Guard, Geological Survey, Army Corp of Engineers, etc) have been appropriated sizable monies for major infrastructure investments and assets renewals, which include new construction, major overhaul, and repair project for their fleets.”

Master Marine has delivered two towboats in the past six months, with seven Tier 3 1,600-horsepower Subchapter M approved design towboats for towing and fleeting markets under construction. Steven Authement, Director of Business Development Inland & Gulf Region, told Marine News that he expects shipyards to remain busy for a number of reasons, including operators having to meet engines emissions regulations and Subchapter M rules. In addition, Authement said major oil companies are setting age limits for the towboats and barges that carry their products, meaning new tonnage is required to replace older assets that age out. “Shipyards should continue to stay busy with meeting the vessel demand since a lot of older towboats are still operating out three and it is only a matter of time before they must be replaced.”

“A lot of larger HP Tier 3 towboats were contracted in the past year and a half and are in different stages of construction and delivery. Now that Tier 4 is required for any towboat over 1,600-horsepower, owners are deciding to replace their older vessels since it will be more beneficial to them than trying to repair their older vessels to meet Sub M compliance,” he said.

Authement added, “The international trade deal being approved should help our farmers with more required production and will only strengthen the inland marine market. The fact that a lot of funding has been approved with projects underway for the inland infrastructure system with only improve matters. We must now weather the virus storm so that we can return to a healthy economy.”

On the West Coast, build activity has paused at All American Marine in Bellingham, Wash. Ron Wille, Business Development Manager at AAM said the shipyard is constructing twin 78-foot passenger tour vessels for a private client in the Pacific Northwest, due to be launched in Spring and Summer 2020 respectively, as well as two wildlife tour vessels for Major Marine Tours in Seward Alaska. Once delivered in the Spring and Summer of 2021 respectively, the 83- by 32-foot vessels will carry passengers on glacier and wildlife tours to Kenai Fjords National Park and the Alaska National Maritime Wildlife refuge.

In addition, AAM recently won a contract from SWITCH Maritime to complete the aluminum construction and outfitting of a 70-foot zero-emissions, hydrogen-powered, electric drive ferry that will operate in the California Bay Area. Prior to transfer to AAM, the project had begun at Bay Ship & Yacht shipyard in Alameda, Calif. (still operational amid COVID-19) where the aluminum hull and superstructure had been started. Bronson Lamb, AAM Marketing Manager, told Marine News that a portion of the hull and super structure of the vessel has been completed, and AAM will complete all remaining aluminum fabrication and welding and then commence with outfitting all interior and propulsion aspects of the vessel, including but not limited to: the hydrogen fuel cell system, paint, electrical, control systems and seating. AAM is currently on pace to deliver the vessel in late-2020, but the timeline could potentially be impacted by current events surrounding the coronavirus outbreak, Lamb said. 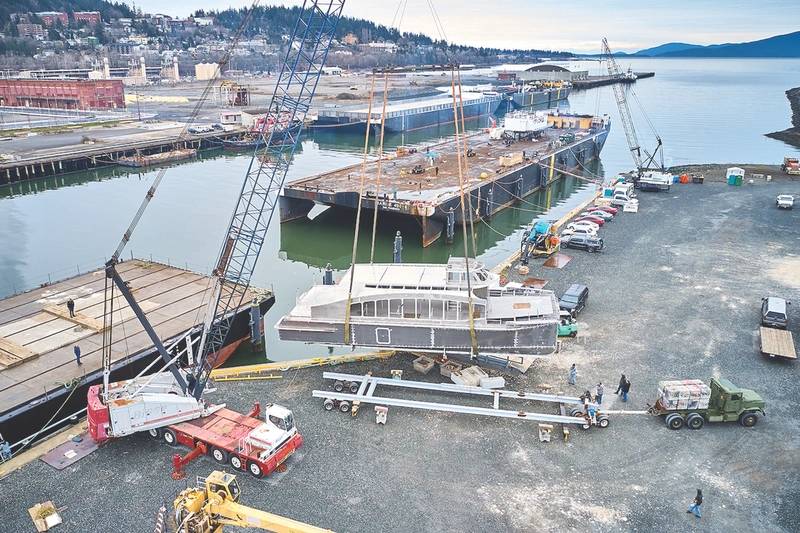 “The marine sector in North America is busy right now, and Armstrong Marine USA has been growing steadily over the last three years,” said Cordelia Aud, Sales and Marketing. “Tour companies and ferry operators are turning to us for innovative solutions and we are growing in this market every year. We are also experiencing a growing demand for our catamaran expertise in industries like hydrographic survey and landing craft operations. We have also taken on more aluminum RIB projects in the last two years with our partner Naiad Design. Our RIBs have been delivered to both coasts in the U.S., and we recently delivered our first RIB for export as well.” 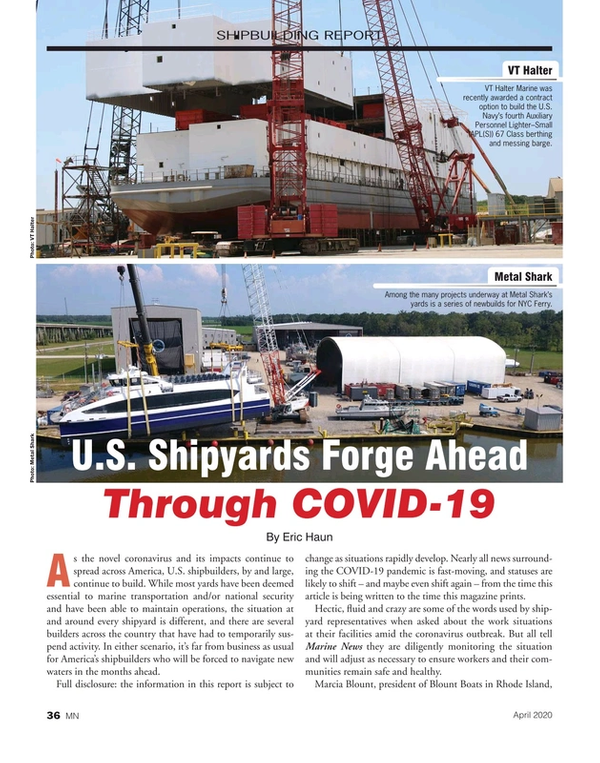 Read US Shipyards Forge Ahead Through COVID-19 in Pdf, Flash or Html5 edition of April 2020 Marine News

Other stories from April 2020 issue