Subchapter M, the United States regulatory code dealing with towing vessels and requirements for towing vessel safety, has officially been in place since July 20, 2016, when the U.S. Coast Guard finalized Sub M rulemaking.

Since the rules were finalized there have been a couple of important hammer dates. In spring and summer 2018 the first certificates of inspection (COI) were issued. COIs are central within the Sub M program. A vessel needs a COI to legally operate. (All vessels were required to comply with Sub M by July 20, 2018. The COI publicly denotes and registers that compliance.) A COI is valid for five years; then it needs to be renewed. Sub M also requires annual vessel inspections. The USCG’s inspection fee is $1,030 per vessel, billed annually.

A second important date occurred this past summer: July 22, when at least 25% of a company’s towing vessels were required to have valid COIs. On July 20, 2020, at least 50% of vessels must have COIs. This incremental approach continues to July 19, 2022, when 100% of impacted vessels need to be COI compliant.

On the one hand, this measured phase-in allows an orderly start to a program that the Coast Guard estimated in 2016 would “affect approximately 5,509 U.S. flag towing vessels engaged in pushing, pulling, or hauling alongside, and the 1,096 companies that own or operate [those vessels].”

But make no mistake, Sub M is a complex and complicated program for vessel owners, the Coast Guard and newly allowed third party operators (TPO) who function as a kind of proxy for the USCG. TPOs can issue COIs (although, upon review, the USCG can overrule a TPO’s work). The TPO option was included in Sub M to provide an alternate pathway for compliance. The TPO provision greatly expanded the personnel and resources available to implement – by deadline – Sub M’s extensive and expansive demands.

As the Sub M program approaches its next July deadline Marine News checks in, to get at least a high-level perspective about how implementation is proceeding.

The Coast Guard’s public information on Sub M startup is a bit scattered, and sparse. There are no public-facing websites, for example, with summary information on vessels inspected, or total COIs issued.

In response to Marine News’ questions, the USCG’s Sub M team had only rather general replies.

Thomas “Scott” Kuhaneck is on the Coast Guard’s Domestic Commercial Vessel Compliance Staff. He said that “as with any new program, there are going to be some growing pains.” He mentioned three areas that needed some smoothing out: vessel audits using the TSMS option; enforcement for harbor assist vessels; and deficiencies in record keeping and reporting, again for vessels using the TSMS option. TSMS refers to “towing safety management system,” an opt-in provision that provides a bit more program flexibility.

Kuhaneck said approximately 1,500 COIs have been granted so far, or 27% of EPA’s estimated 5,509 vessels. That’s an important metric: Sub M is on track.

In response to a question about Sub M and USCG resources, Kuhaneck said, “There have been no issues that I am aware of relating to a lack of personnel or resources.”

Top goals for 2020, Kuhaneck said, are to get to the required 50% level for COIs and bringing single vessel owner/operators into the program. Small operators were given extra time at startup; their initial deadline was 2020, not 2019.

The American Waterways Operators (AWO) is the national trade association for the U.S. tugboat, towboat and barge industry. AWO’s Responsible Carrier Program served as a model for Sub M development.

AWO is laser-focused on Sub M and regularly updates its members. Last February, an AWO survey showed that the average COI processing time was two to three months. Priority concerns for members included casualty notification and investigation and requirements pertaining to machinery and electrical systems and equipment. AWO members preferred the TPO option.

Caitlyn Stewart is AWO’s Senior Director for Regulatory Affairs. In her report to AWO members she references an issue that emerged from the February survey: industry concerns about official communications across Captain of the Port Zones, communications to ensure consistent decision-making among OCMIs – officers in charge of marine inspections. Indeed, from recent discussions with company representatives, this is still a common concern.

In October, in a meeting with AWO, the Coast Guard presented summary data regarding vessel deficiencies and detentions from July to September (the government shutdown at the start of 2019 slowed Sub M’s progress).

Of 655 deficiencies, the highest number – 122 – related to the main propulsion engine or propulsion and auxiliary machinery. Thirty-three deficiencies were due to structural conditions, and 21 were related to navigation safety. Other concerns included lifebuoys, lifejackets, firefighting equipment and appliances, and related fire safety requirements. Seven of nine towing vessels detained during this period had excessive oily water in the bilge and/or engine room.

More recently, Sub M was a priority topic at AWO’s annual Midwest, Ohio Valley and Southern Regions’ meeting in January in New Orleans. After the meeting, Stewart was asked to update some of the members’ concerns. Again, she cited the issue of trying to meet Sub M requirements that can be interpreted and applied differently in different Captain of the Port zones.

Thauvette’s operations clearly demonstrate industry’s inter-zone concerns. A tug from Cleveland, for example, may be repositioned to Toledo, thereby moving from Coast Guard Sector Buffalo to Sector Detroit. Thauvette commented that “the interpretation of the requirements of Subchapter M from one Coast Guard Sector or Coast Guard Station to the next can vary significantly,” leading to “confusion for both the Coast Guard and industry.”

To standardize implementation, Thauvette suggests that Sub M decision making authority needs to be more centralized. He proposes that CG leadership should choose one Sector to be the “law of the land”, so to speak.

The Towing Company has met Sub M’s initial goal: 25% of its vessels had COIs by the June 2019 deadline and the company is on schedule to meet the 50% requirement. But it hasn’t been easy, and scheduling inspections is challenging. Thauvette commented, however, “that (our TPO) and our local USCG have been very accommodating. There has been a real sense of ‘we are all in this together’ at this level.”

Another concern that emerged from AWO’s January regional meeting pertains to equitable compliance, or more bluntly, that some operators may be skirting the program. Central to this is what the COI number count actually means. Recall that by July 22, last year, 25% of a company’s vessels needed a COI. That’s not the same as 25% of all vessels on a waterway.

AWO’s Stewart said the CG is working to clarify COI numbers. There could be a mismatch between total vessels with COIs in a port versus COIs granted to singular operators. Consider: in a port zone with 100 vessels 25 may have a COI. Yes, that’s 25%. But if eight vessels are owned by one company, five owned by a second and 12 are owned by two or three other companies, that aggregate total doesn’t mean that 25% of each company’s fleet has a COI – Sub M’s fundamental demand.

Mary McCarthy is Director of Safety and Quality Systems for Canal Barge Company, Inc., based in New Orleans.

For Canal Barge, “startup was pretty much what we expected and planned for,” McCarthy said, “mostly because the industry and the Coast Guard had collaborated on the regulation for a decade.”

For Canal Barge, McCarthy said “these issues have mostly been resolved due to continued open dialogue between industry and the Coast Guard.”

David Orme is Chief Operating Officer with Carlisle & Bray Enterprises, a full services marine company with 23 vessels based in Covington, Ky., across from Cincinnati on the Ohio River. Orme said Sub M startup has proceeded smoothly. The company has been able to align the inspection process with C&B’s operational needs, and half the company’s vessels are in compliance with Sub M. C&B works with the CG for COI inspections.

Orme commented that Sub M’s annual inspection fees are rather excessive given the “substantial costs already associated with maintaining equipment consistent with requirements and costs associated with downtime/loss of production.” He suggests an inspection every five years unless a company has a history of violations.

Orme suggests a re-look at other Sub M regs. He questions, for example, whether the same requirements should apply for brown water operations versus blue water. But he expects Sub M to evolve “as experience and common sense are evaluated and applied.”

Sub M progresses in waters that aren’t yet placid, but surely navigable. But keep watch: revised inspection fees are on the horizon. We’ll update. 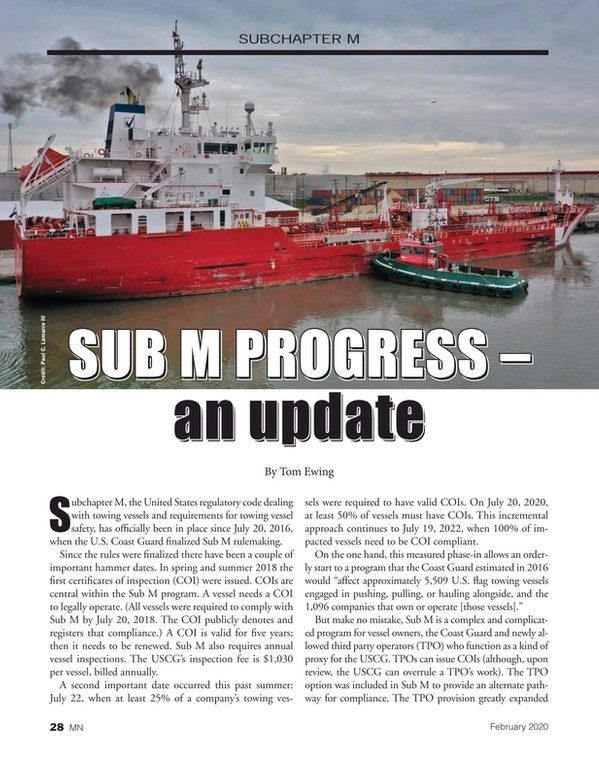 Other stories from February 2020 issue