The Good, the Bad and the Undeniably Ugly

The end of 2019 promises to be a busy, and potentially discordant, legislative and regulatory period for the United States maritime industry as both Congress and the Executive Branch look to take decisive action, with both positive and negative potential impacts depending on your perspective. With appropriation and authorization bills still pending, and various open regulatory actions, there are significant opportunities for maritime stakeholders to influence policy outcomes.

Funding Fights Continue in Congress
On October 31, 2019, the Senate passed the Fiscal Year (FY) 2020 transportation spending bill, which contained a number of positive elements. For example, the bill would provide full authorized funding for the Maritime Security Program (MSP), seeking to ensure that all 60 U.S.-flag vessels enrolled in the program receive their full stipend amount. The spending bill also contains an additional $300 million to fund the construction of the third National Security Multi-Mission Vessel (NSMV), which would replace the State of Maine as the Maine Maritime Academy’s training vessel. The bill would also provide $20 million in funding for the Maritime Administration’s (MARAD) Small Shipyard Grant Program.

While the news was positive for U.S.-flag operators and U.S. shipyards, the Senate bill received a less enthusiastic response from U.S. port stakeholders. While the House of Representatives’ version of the spending bill, passed by the House in June 2019, contained $225 million for the Port Infrastructure Development Program and $15 million for the Short Sea Transportation Program (America’s Marine Highways), the Senate version proposes only $91.6 million and $7 million, respectively, for the two programs. The American Association of Port Authorities (AAPA) expressed concern over the Senate reductions and will seek to support the House’s funding levels when the bill goes to conference to resolve the differences between the House and Senate versions. However, another stop-gap spending bill may be necessary before these differences can be resolved. As this column was penned, the current Continuing Resolution is set to expire on November 21, 2019, creating the threat of yet another government shutdown.

Potential for New and Expanded Programs
The National Defense Authorization Act (NDAA) for FY 2020, which remains stalled in the Senate over partisan disagreement on the use of military funding for the border wall and other issues, nevertheless also contains a number of exciting possibilities for the U.S. maritime community. The bill would reauthorize the MSP, extending the program through FY 2035, and increasing the annual stipend to $5.3 million per vessel starting in FY 2022 (with additional escalators in FYs 2026, 2029, and 2032). The program’s extension should be welcome news to operational planners at the U.S. Transportation Command (USTRANSCOM), which rely on the availability of the MSP fleet’s sealift capacity and intermodal access to plan future operations.

In addition, the NDAA for FY 2020 would establish two new programs modeled in part off of the MSP – the Tanker Security Program and the Cable Security Program – which seek to grow the U.S.-flag fleet. The Tanker Security Program would establish a fleet of 10 active, commercially viable, militarily useful, privately owned product tankers to meet national defense and other security requirements. Similar to the MSP, in exchange for an annual stipend payment U.S.-flag tankers enrolled in the program would be required to (a) operate in U.S. foreign commerce, or mixed U.S. foreign commerce and domestic trade, and (b) enroll in an emergency preparedness agreement to provide vessel capacity, terminal facilities, and related services when required by USTRANSCOM. On November 1, 2019, in a potential sign of optimism for the bill, MARAD published a notice seeking public comment on its draft Voluntary Tanker Agreement, which would serve as the Tanker Security Program’s emergency preparedness agreement.

In a similar manner, the Cable Security Program would seek to enroll two U.S.-flag cable vessels to meet national security requirements. In exchange for a $5 million annual stipend, the vessels would be required to engage in “cable services” and would be enrolled in a contingency agreement to make the vessels and associated resources available to meet Department of Defense (DoD) needs. While both programs passed the House in July 2019, it is unclear how they will be treated in conferences with the Senate.

In a move welcomed by U.S.-flag vessel operators, the House-passed Coast Guard Authorization Act for 2019, directs the U.S. Comptroller General to conduct an audit regarding the enforcement of cargo preference laws. The audit would evaluate the compliance of civilian agencies under the Cargo Preference Act of 1954, the Export-Import Bank under Public Resolution 17, and DoD under the Cargo Preference Act of 1904, in addition to reviewing enforcement activities undertaken by MARAD. The report would also include recommendations on actions that should be taken to ensure full compliance with U.S. cargo preference laws and other measures that may compel government agencies, and their contractors, to use U.S.-flag vessels. If passed by the Senate, and implemented as envisioned, the audit would provide unprecedented clarity into the movement of government-impelled cargo. However, the audit would undoubtedly be a contentious undertaking for shipper agencies, which often have their own unique views of cargo preference requirements.

Regulatory Action Seek Operational Changes
Finally, two Executive Branch agencies are undertaking noteworthy rulemakings on which maritime stakeholders should keep a close eye. First, on October 23, 2019, U.S. Customs and Border Protection (CBP) again proposed significant revisions to its Jones Act letter rulings regarding the transportation of “vessel equipment” (which does not constitute “merchandise” and therefore falls outside of the Jones Act’s requirements). Over the last forty years, CBP has taken an arguably expansive view of “vessel equipment” generally interpreting the term to include items that were necessary for the “mission of the vessel.”

The proposed modification would limit “vessel equipment” to items which are “necessary and appropriate for the navigation, operation or maintenance of a vessel and for the comfort and safety of the persons on board.” Examples of such equipment include “those items that aid in the installation, inspection, repair, maintenance, surveying, positioning, modification, construction, decommissioning, drilling, completion, workover, abandonment or similar activities or operations of wells, seafloor or subsea infrastructure, flowlines, and surface production facilities.” CBP’s notice emphasizes “that the fact that an item is returned to and departs with the vessel after an operation is completed, and is not left behind on the seabed, is a factor that weighs in favor of an item being classified as vessel equipment, but is not a determinative factor.”

In addition to CBP’s notice, on September 17, 2019, the Federal Maritime Commission (FMC) issued a proposed rule as a follow-up to the Commission’s Fact Finding Investigation No. 28, regarding the conditions and practices relating to detention, demurrage, and free time. The proposed rule sets forth a list of factors the FMC would consider when determining whether the assessment of demurrage and detention is reasonable (and therefore lawful under the Shipping Act). The FMC’s proposal has placed shippers and ocean transportation intermediaries in direct opposition to ocean carriers and marine terminal operators, as evidenced by comments submitted prior to the October 31, 2019, public comment deadline. The collective transportation community anxiously awaits the FMC’s response to the submitted comments.

Thus, with funding and authorization fights continuing in Congress (under threat of government shutdown and a divisive impeachment process) and contentious regulatory actions affecting all corners of the marine transportation system, the final days of calendar year 2019 will likely have a lasting impact on the U.S. maritime industry. 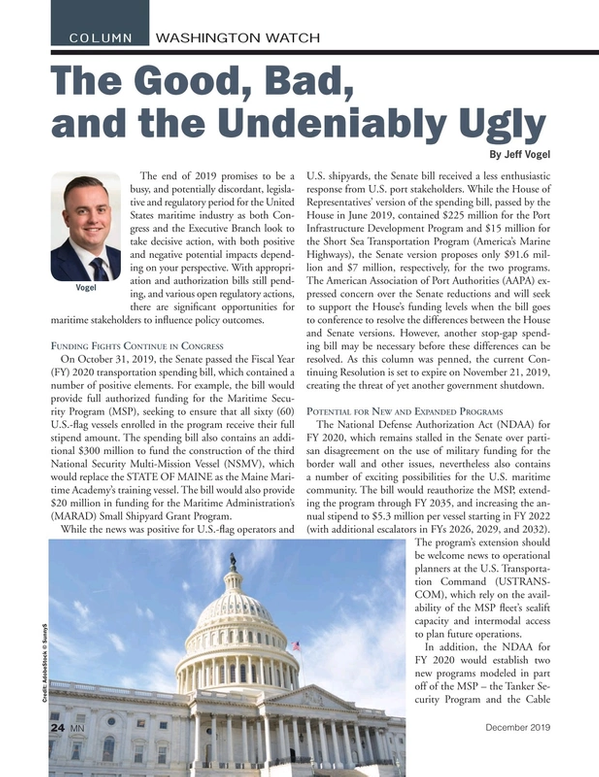 Read The Good, the Bad and the Undeniably Ugly in Pdf, Flash or Html5 edition of December 2019 Marine News

Other stories from December 2019 issue