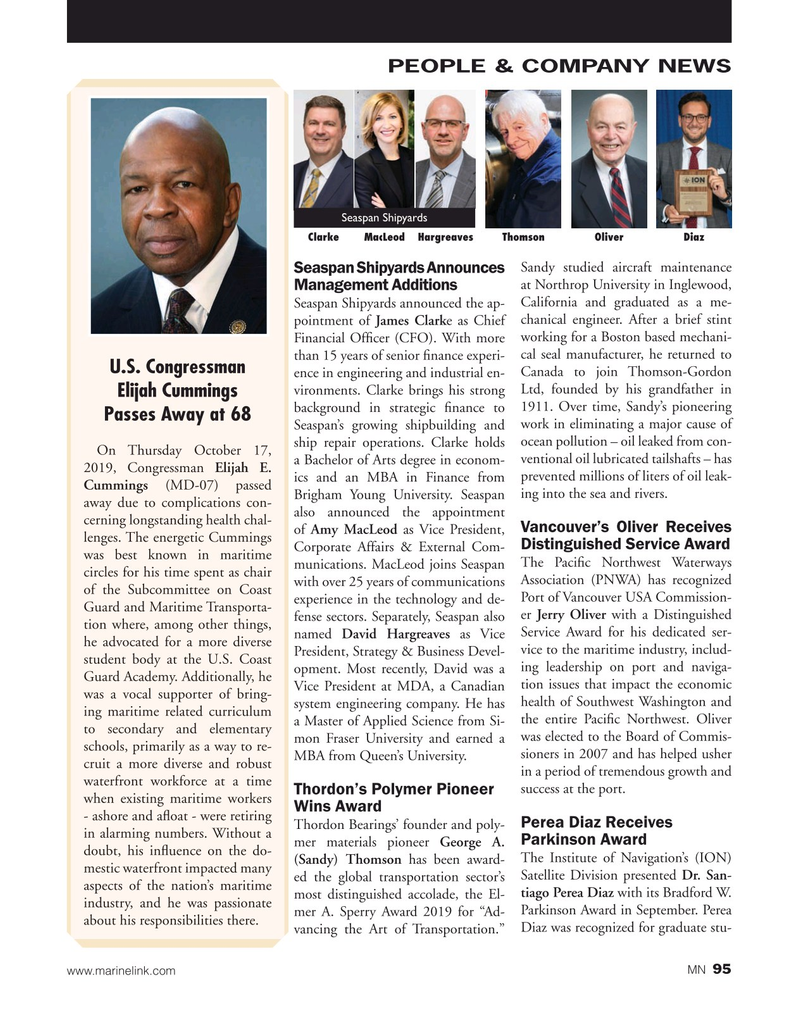 Seaspan Shipyards announced the ap- California and graduated as a me- pointment of James Clarke as Chief chanical engineer. After a brief stint

Financial Of? cer (CFO). With more working for a Boston based mechani- than 15 years of senior ? nance experi- cal seal manufacturer, he returned to

U.S. Congressman ence in engineering and industrial en- Canada to join Thomson-Gordon vironments. Clarke brings his strong Ltd, founded by his grandfather in

Brigham Young University. Seaspan ing into the sea and rivers.

Distinguished Service Award was best known in maritime Corporate Affairs & External Com- munications. MacLeod joins Seaspan The Paci? c Northwest Waterways circles for his time spent as chair with over 25 years of communications Association (PNWA) has recognized of the Subcommittee on Coast

Port of Vancouver USA Commission- experience in the technology and de-

Guard and Maritime Transporta- fense sectors. Separately, Seaspan also er Jerry Oliver with a Distinguished tion where, among other things, named David Hargreaves as Vice Service Award for his dedicated ser- he advocated for a more diverse vice to the maritime industry, includ-

President, Strategy & Business Devel- student body at the U.S. Coast opment. Most recently, David was a ing leadership on port and naviga-

Vice President at MDA, a Canadian tion issues that impact the economic was a vocal supporter of bring- system engineering company. He has health of Southwest Washington and ing maritime related curriculum the entire Paci? c Northwest. Oliver to secondary and elementary a Master of Applied Science from Si- mon Fraser University and earned a was elected to the Board of Commis- schools, primarily as a way to re- sioners in 2007 and has helped usher

MBA from Queen’s University. cruit a more diverse and robust in a period of tremendous growth and waterfront workforce at a time success at the port.

Wins Award - ashore and a? oat - were retiring

Thordon Bearings’ founder and poly- in alarming numbers. Without a

Parkinson Award mer materials pioneer George A. doubt, his in? uence on the do-

The Institute of Navigation’s (ION) (Sandy) Thomson has been award- mestic waterfront impacted many ed the global transportation sector’s Satellite Division presented Dr. San- aspects of the nation’s maritime tiago Perea Diaz with its Bradford W. most distinguished accolade, the El- industry, and he was passionate

Parkinson Award in September. Perea mer A. Sperry Award 2019 for “Ad- about his responsibilities there.

vancing the Art of Transportation.” Diaz was recognized for graduate stu- 95 www.marinelink.com MN