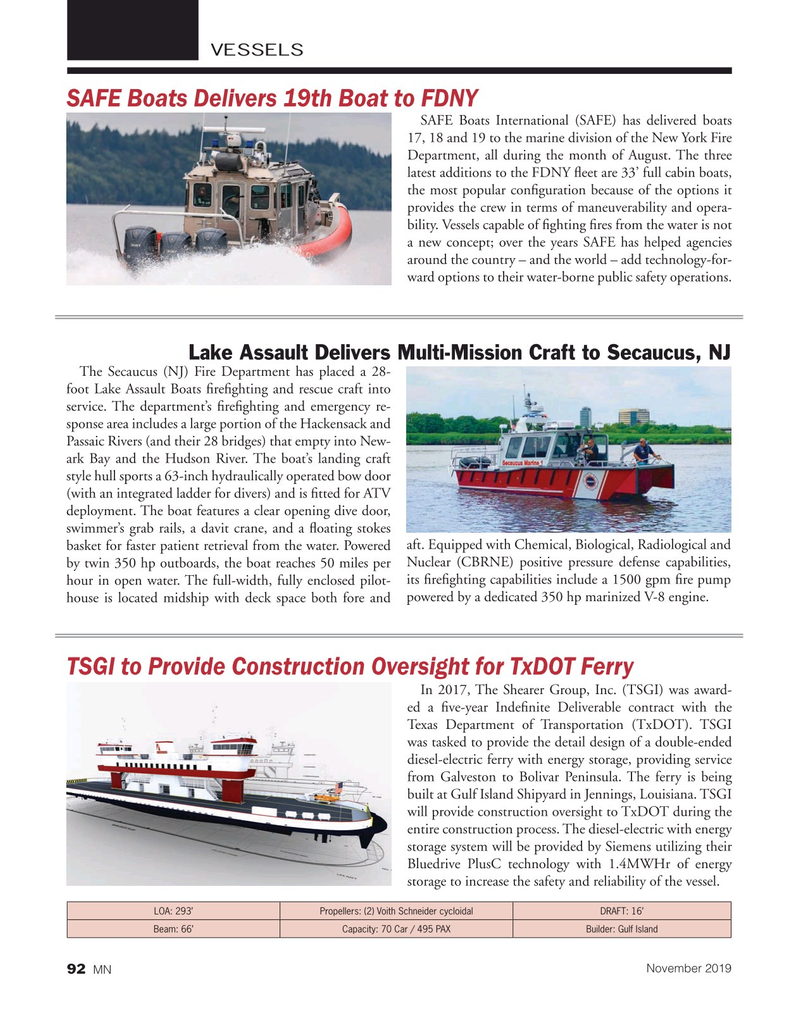 SAFE Boats International (SAFE) has delivered boats 17, 18 and 19 to the marine division of the New York Fire

Department, all during the month of August. The three latest additions to the FDNY ? eet are 33’ full cabin boats, the most popular con? guration because of the options it provides the crew in terms of maneuverability and opera- bility. Vessels capable of ? ghting ? res from the water is not a new concept; over the years SAFE has helped agencies around the country – and the world – add technology-for- ward options to their water-borne public safety operations.

The Secaucus (NJ) Fire Department has placed a 28- foot Lake Assault Boats ? re? ghting and rescue craft into service. The department’s ? re? ghting and emergency re- sponse area includes a large portion of the Hackensack and

Passaic Rivers (and their 28 bridges) that empty into New- ark Bay and the Hudson River. The boat’s landing craft style hull sports a 63-inch hydraulically operated bow door (with an integrated ladder for divers) and is ? tted for ATV deployment. The boat features a clear opening dive door, swimmer’s grab rails, a davit crane, and a ? oating stokes basket for faster patient retrieval from the water. Powered aft. Equipped with Chemical, Biological, Radiological and by twin 350 hp outboards, the boat reaches 50 miles per Nuclear (CBRNE) positive pressure defense capabilities, hour in open water. The full-width, fully enclosed pilot- its ? re? ghting capabilities include a 1500 gpm ? re pump house is located midship with deck space both fore and powered by a dedicated 350 hp marinized V-8 engine.

In 2017, The Shearer Group, Inc. (TSGI) was award- ed a ? ve-year Inde? nite Deliverable contract with the

Texas Department of Transportation (TxDOT). TSGI was tasked to provide the detail design of a double-ended diesel-electric ferry with energy storage, providing service from Galveston to Bolivar Peninsula. The ferry is being built at Gulf Island Shipyard in Jennings, Louisiana. TSGI will provide construction oversight to TxDOT during the entire construction process. The diesel-electric with energy storage system will be provided by Siemens utilizing their

Bluedrive PlusC technology with 1.4MWHr of energy storage to increase the safety and reliability of the vessel.