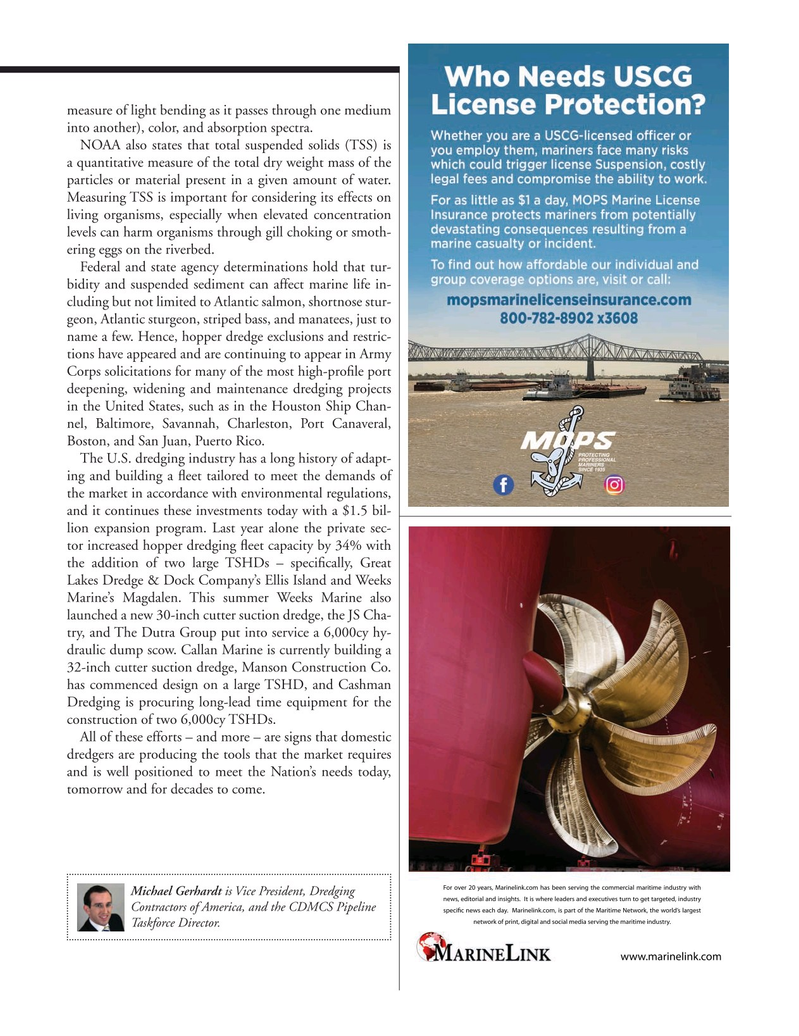 measure of light bending as it passes through one medium into another), color, and absorption spectra.

NOAA also states that total suspended solids (TSS) is a quantitative measure of the total dry weight mass of the particles or material present in a given amount of water.

Measuring TSS is important for considering its effects on living organisms, especially when elevated concentration levels can harm organisms through gill choking or smoth- ering eggs on the riverbed.

Federal and state agency determinations hold that tur- bidity and suspended sediment can affect marine life in- cluding but not limited to Atlantic salmon, shortnose stur- geon, Atlantic sturgeon, striped bass, and manatees, just to name a few. Hence, hopper dredge exclusions and restric- tions have appeared and are continuing to appear in Army

Corps solicitations for many of the most high-pro? le port deepening, widening and maintenance dredging projects in the United States, such as in the Houston Ship Chan- nel, Baltimore, Savannah, Charleston, Port Canaveral,

The U.S. dredging industry has a long history of adapt- ing and building a ? eet tailored to meet the demands of the market in accordance with environmental regulations, and it continues these investments today with a $1.5 bil- lion expansion program. Last year alone the private sec- tor increased hopper dredging ? eet capacity by 34% with the addition of two large TSHDs – speci? cally, Great

Dredging is procuring long-lead time equipment for the construction of two 6,000cy TSHDs.

All of these efforts – and more – are signs that domestic dredgers are producing the tools that the market requires and is well positioned to meet the Nation’s needs today, tomorrow and for decades to come.

Contractors of America, and the CDMCS Pipeline