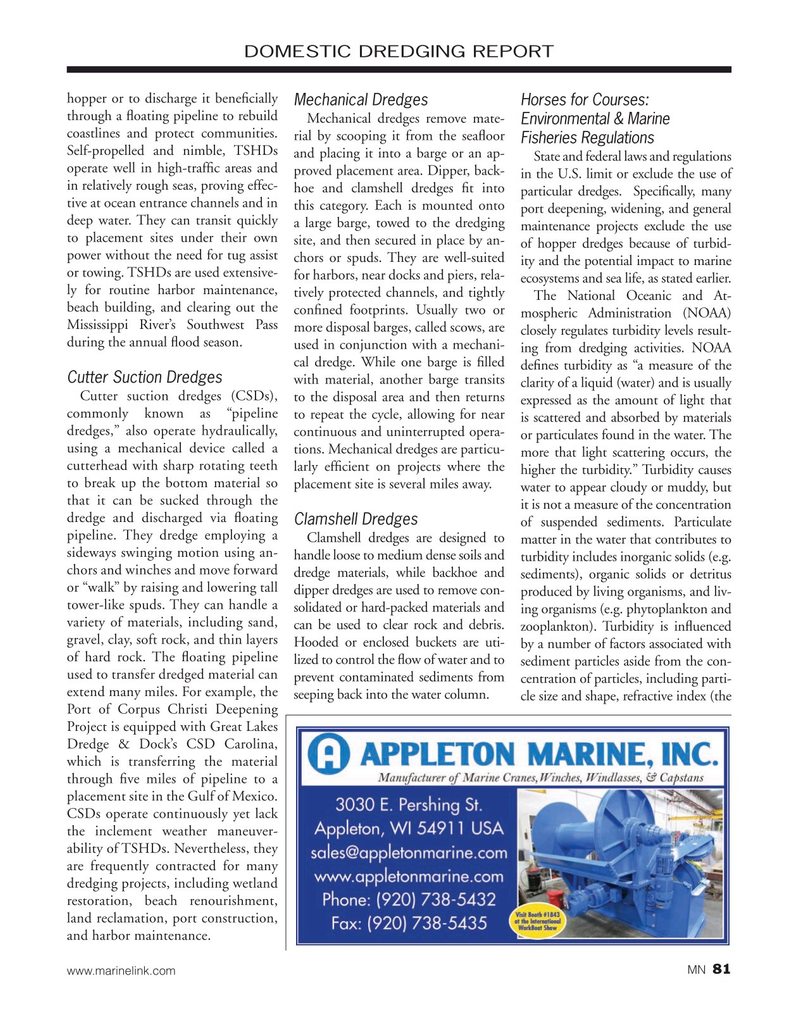 DOMESTIC DREDGING REPORT hopper or to discharge it bene? cially

Mechanical Dredges Horses for Courses: through a ? oating pipeline to rebuild

Environmental & Marine coastlines and protect communities. rial by scooping it from the sea? oor

Self-propelled and nimble, TSHDs and placing it into a barge or an ap-

State and federal laws and regulations operate well in high-traf? c areas and proved placement area. Dipper, back- in the U.S. limit or exclude the use of in relatively rough seas, proving effec- hoe and clamshell dredges ? t into particular dredges. Speci? cally, many tive at ocean entrance channels and in this category. Each is mounted onto port deepening, widening, and general deep water. They can transit quickly a large barge, towed to the dredging maintenance projects exclude the use to placement sites under their own site, and then secured in place by an- of hopper dredges because of turbid- power without the need for tug assist chors or spuds. They are well-suited ity and the potential impact to marine or towing. TSHDs are used extensive- for harbors, near docks and piers, rela- ecosystems and sea life, as stated earlier. ly for routine harbor maintenance, tively protected channels, and tightly

The National Oceanic and At- beach building, and clearing out the con? ned footprints. Usually two or mospheric Administration (NOAA)

Mississippi River’s Southwest Pass more disposal barges, called scows, are closely regulates turbidity levels result- during the annual ? ood season. used in conjunction with a mechani- ing from dredging activities. NOAA cal dredge. While one barge is ? lled de? nes turbidity as “a measure of the

Cutter Suction Dredges with material, another barge transits clarity of a liquid (water) and is usually

Cutter suction dredges (CSDs), to the disposal area and then returns expressed as the amount of light that commonly known as “pipeline to repeat the cycle, allowing for near is scattered and absorbed by materials dredges,” also operate hydraulically, continuous and uninterrupted opera- or particulates found in the water. The using a mechanical device called a tions. Mechanical dredges are particu- more that light scattering occurs, the cutterhead with sharp rotating teeth larly ef? cient on projects where the higher the turbidity.” Turbidity causes to break up the bottom material so placement site is several miles away.

water to appear cloudy or muddy, but that it can be sucked through the it is not a measure of the concentration dredge and discharged via ? oating

Clamshell dredges are designed to matter in the water that contributes to sideways swinging motion using an- handle loose to medium dense soils and turbidity includes inorganic solids (e.g. chors and winches and move forward dredge materials, while backhoe and sediments), organic solids or detritus or “walk” by raising and lowering tall dipper dredges are used to remove con- produced by living organisms, and liv- tower-like spuds. They can handle a solidated or hard-packed materials and ing organisms (e.g. phytoplankton and variety of materials, including sand, can be used to clear rock and debris. zooplankton). Turbidity is in? uenced gravel, clay, soft rock, and thin layers Hooded or enclosed buckets are uti- by a number of factors associated with of hard rock. The ? oating pipeline lized to control the ? ow of water and to sediment particles aside from the con- used to transfer dredged material can prevent contaminated sediments from centration of particles, including parti- extend many miles. For example, the seeping back into the water column. cle size and shape, refractive index (the

Project is equipped with Great Lakes

Dredge & Dock’s CSD Carolina, which is transferring the material through ? ve miles of pipeline to a placement site in the Gulf of Mexico.