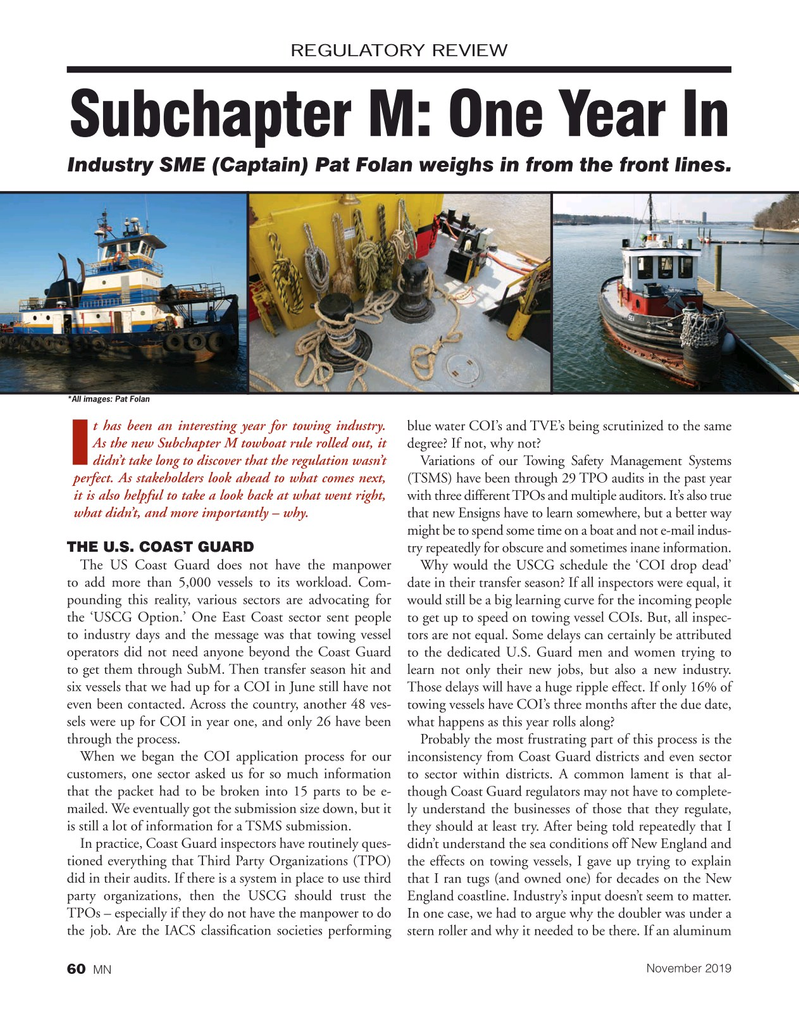 Subchapter M: One Year In

*All images: Pat Folan t has been an interesting year for towing industry. blue water COI’s and TVE’s being scrutinized to the same

As the new Subchapter M towboat rule rolled out, it degree? If not, why not?

I perfect. As stakeholders look ahead to what comes next, (TSMS) have been through 29 TPO audits in the past year it is also helpful to take a look back at what went right, with three different TPOs and multiple auditors. It’s also true what didn’t, and more importantly – why. that new Ensigns have to learn somewhere, but a better way might be to spend some time on a boat and not e-mail indus-

The US Coast Guard does not have the manpower Why would the USCG schedule the ‘COI drop dead’ to add more than 5,000 vessels to its workload. Com- date in their transfer season? If all inspectors were equal, it pounding this reality, various sectors are advocating for would still be a big learning curve for the incoming people the ‘USCG Option.’ One East Coast sector sent people to get up to speed on towing vessel COIs. But, all inspec- to industry days and the message was that towing vessel tors are not equal. Some delays can certainly be attributed operators did not need anyone beyond the Coast Guard to the dedicated U.S. Guard men and women trying to to get them through SubM. Then transfer season hit and learn not only their new jobs, but also a new industry. six vessels that we had up for a COI in June still have not Those delays will have a huge ripple effect. If only 16% of even been contacted. Across the country, another 48 ves- towing vessels have COI’s three months after the due date, sels were up for COI in year one, and only 26 have been what happens as this year rolls along? through the process. Probably the most frustrating part of this process is the

When we began the COI application process for our inconsistency from Coast Guard districts and even sector customers, one sector asked us for so much information to sector within districts. A common lament is that al- that the packet had to be broken into 15 parts to be e- though Coast Guard regulators may not have to complete- mailed. We eventually got the submission size down, but it ly understand the businesses of those that they regulate, is still a lot of information for a TSMS submission. they should at least try. After being told repeatedly that I

In practice, Coast Guard inspectors have routinely ques- didn’t understand the sea conditions off New England and tioned everything that Third Party Organizations (TPO) the effects on towing vessels, I gave up trying to explain did in their audits. If there is a system in place to use third that I ran tugs (and owned one) for decades on the New party organizations, then the USCG should trust the England coastline. Industry’s input doesn’t seem to matter.

TPOs – especially if they do not have the manpower to do In one case, we had to argue why the doubler was under a the job. Are the IACS classi