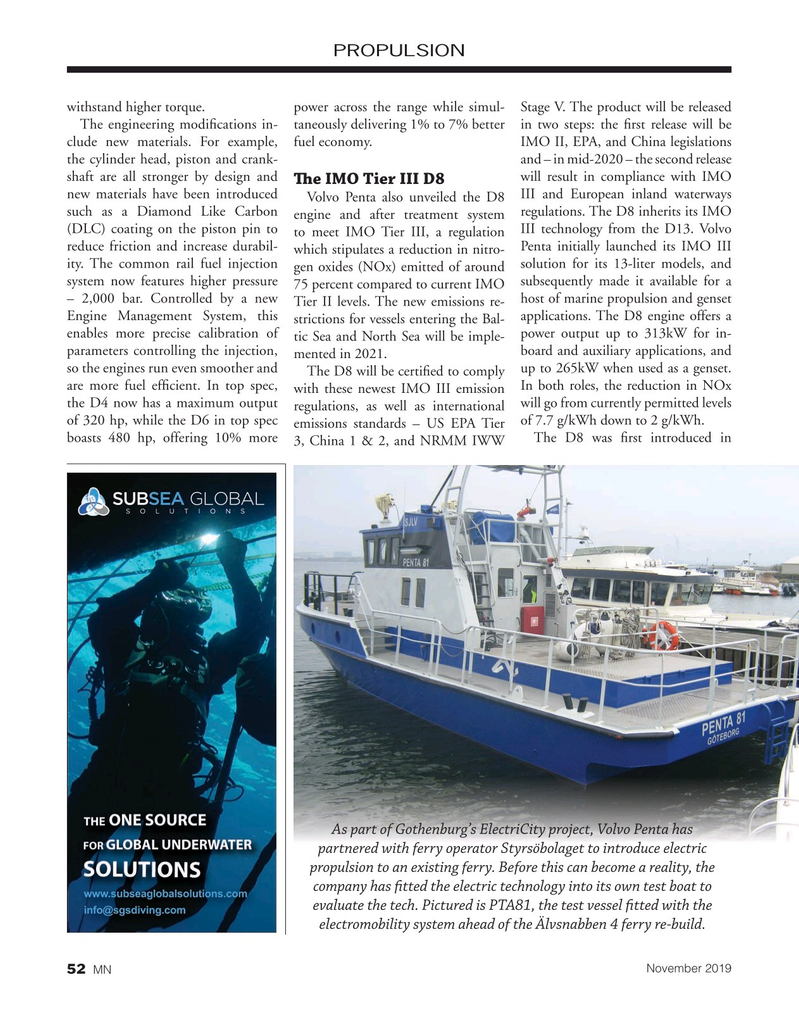 PROPULSION withstand higher torque. power across the range while simul- Stage V. The product will be released

The engineering modi? cations in- taneously delivering 1% to 7% better in two steps: the ? rst release will be clude new materials. For example, fuel economy. IMO II, EPA, and China legislations the cylinder head, piston and crank- and – in mid-2020 – the second release shaft are all stronger by design and will result in compliance with IMO

T e IMO Tier III D8 new materials have been introduced Volvo Penta also unveiled the D8 III and European inland waterways such as a Diamond Like Carbon engine and after treatment system regulations. The D8 inherits its IMO (DLC) coating on the piston pin to to meet IMO Tier III, a regulation III technology from the D13. Volvo reduce friction and increase durabil- Penta initially launched its IMO III which stipulates a reduction in nitro- ity. The common rail fuel injection gen oxides (NOx) emitted of around solution for its 13-liter models, and system now features higher pressure 75 percent compared to current IMO subsequently made it available for a – 2,000 bar. Controlled by a new Tier II levels. The new emissions re- host of marine propulsion and genset

Engine Management System, this strictions for vessels entering the Bal- applications. The D8 engine offers a enables more precise calibration of tic Sea and North Sea will be imple- power output up to 313kW for in- parameters controlling the injection, mented in 2021.

board and auxiliary applications, and so the engines run even smoother and The D8 will be certi? ed to comply up to 265kW when used as a genset. are more fuel ef? cient. In top spec, with these newest IMO III emission In both roles, the reduction in NOx the D4 now has a maximum output regulations, as well as international will go from currently permitted levels of 320 hp, while the D6 in top spec emissions standards – US EPA Tier of 7.7 g/kWh down to 2 g/kWh.

The D8 was ? rst introduced in

As part of Gothenburg’s ElectriCity project, Volvo Penta has partnered with ferry operator Styrsöbolaget to introduce electric propulsion to an existing ferry. Before this can become a reality, the company has f tted the electric technology into its own test boat to evaluate the tech. Pictured is PTA81, the test vessel f tted with the electromobility system ahead of the Älvsnabben 4 ferry re-build.