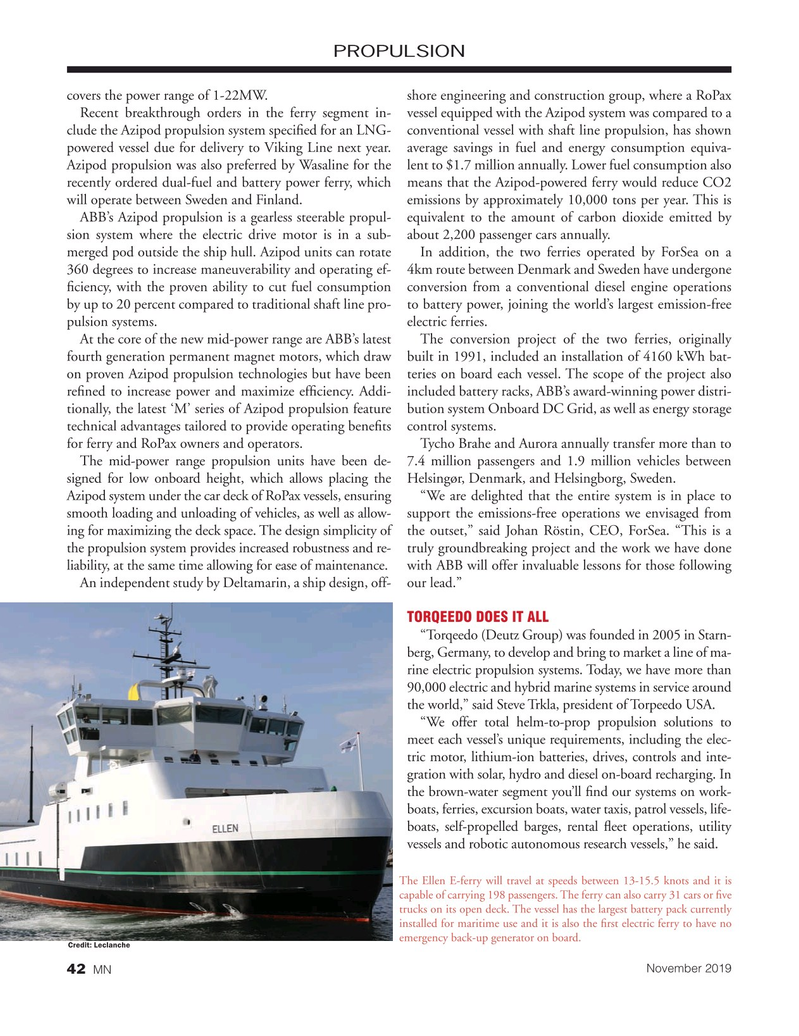 PROPULSION covers the power range of 1-22MW. shore engineering and construction group, where a RoPax

Recent breakthrough orders in the ferry segment in- vessel equipped with the Azipod system was compared to a clude the Azipod propulsion system speci? ed for an LNG- conventional vessel with shaft line propulsion, has shown powered vessel due for delivery to Viking Line next year. average savings in fuel and energy consumption equiva-

Azipod propulsion was also preferred by Wasaline for the lent to $1.7 million annually. Lower fuel consumption also recently ordered dual-fuel and battery power ferry, which means that the Azipod-powered ferry would reduce CO2 will operate between Sweden and Finland. emissions by approximately 10,000 tons per year. This is

ABB’s Azipod propulsion is a gearless steerable propul- equivalent to the amount of carbon dioxide emitted by sion system where the electric drive motor is in a sub- about 2,200 passenger cars annually.

merged pod outside the ship hull. Azipod units can rotate In addition, the two ferries operated by ForSea on a 360 degrees to increase maneuverability and operating ef- 4km route between Denmark and Sweden have undergone ? ciency, with the proven ability to cut fuel consumption conversion from a conventional diesel engine operations by up to 20 percent compared to traditional shaft line pro- to battery power, joining the world’s largest emission-free pulsion systems. electric ferries.

At the core of the new mid-power range are ABB’s latest The conversion project of the two ferries, originally fourth generation permanent magnet motors, which draw built in 1991, included an installation of 4160 kWh bat- on proven Azipod propulsion technologies but have been teries on board each vessel. The scope of the project also re? ned to increase power and maximize ef? ciency. Addi- included battery racks, ABB’s award-winning power distri- tionally, the latest ‘M’ series of Azipod propulsion feature bution system Onboard DC Grid, as well as energy storage technical advantages tailored to provide operating bene? ts control systems.

for ferry and RoPax owners and operators. Tycho Brahe and Aurora annually transfer more than to

The mid-power range propulsion units have been de- 7.4 million passengers and 1.9 million vehicles between signed for low onboard height, which allows placing the Helsingør, Denmark, and Helsingborg, Sweden.

Azipod system under the car deck of RoPax vessels, ensuring “We are delighted that the entire system is in place to smooth loading and unloading of vehicles, as well as allow- support the emissions-free operations we envisaged from ing for maximizing the deck space. The design simplicity of the outset,” said Johan Röstin, CEO, ForSea. “This is a the propulsion system provides increased robustness and re- truly groundbreaking project and the work we have done liability, at the same time allowing for ease of maintenance. with ABB will offer invaluable lessons for those following

An independent study by Deltamarin, a ship design, off- our lead.”

The Ellen E-ferry will travel at speeds between 13-15.5 knots and it is capable of carrying 198 passengers. The ferry can also carry 31 cars or ? ve trucks on its open deck. The vessel has the largest battery pack currently installed for maritime use and it is also the ? rst electric ferry to have no emergency back-up generator on board.