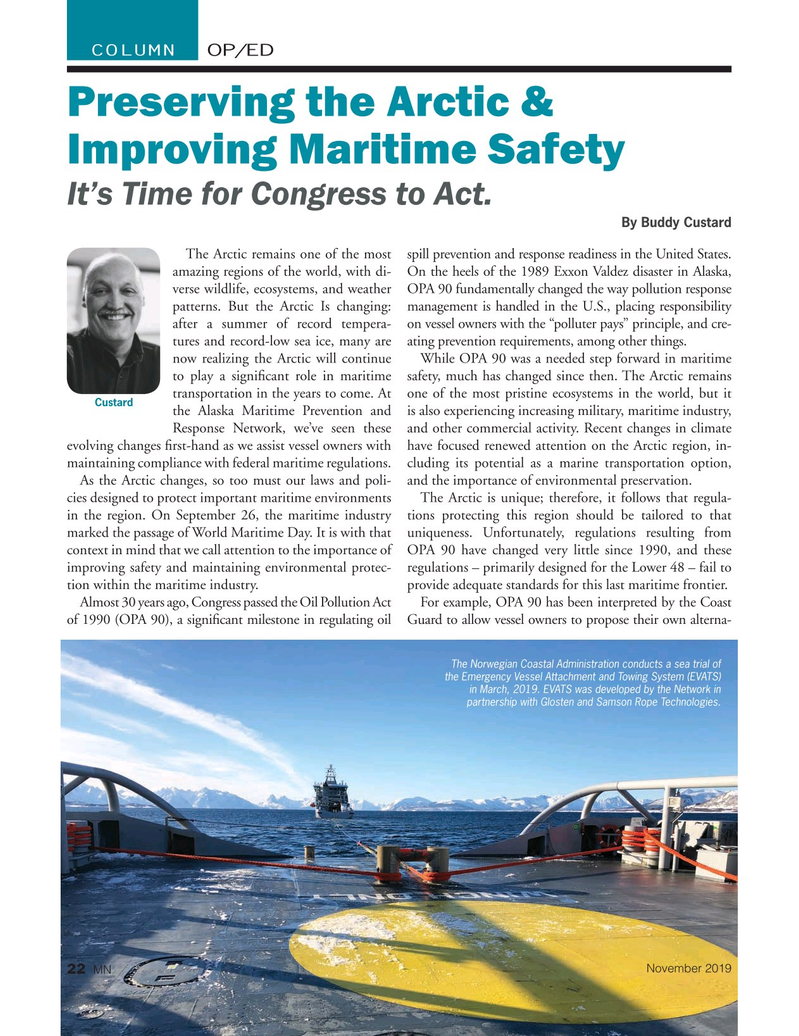 It’s Time for Congress to Act.

The Arctic remains one of the most spill prevention and response readiness in the United States. amazing regions of the world, with di- On the heels of the 1989 Exxon Valdez disaster in Alaska, verse wildlife, ecosystems, and weather OPA 90 fundamentally changed the way pollution response patterns. But the Arctic Is changing: management is handled in the U.S., placing responsibility after a summer of record tempera- on vessel owners with the “polluter pays” principle, and cre- tures and record-low sea ice, many are ating prevention requirements, among other things.

now realizing the Arctic will continue While OPA 90 was a needed step forward in maritime to play a signi? cant role in maritime safety, much has changed since then. The Arctic remains transportation in the years to come. At one of the most pristine ecosystems in the world, but it

Response Network, we’ve seen these and other commercial activity. Recent changes in climate evolving changes ? rst-hand as we assist vessel owners with have focused renewed attention on the Arctic region, in- maintaining compliance with federal maritime regulations. cluding its potential as a marine transportation option,

As the Arctic changes, so too must our laws and poli- and the importance of environmental preservation.

cies designed to protect important maritime environments The Arctic is unique; therefore, it follows that regula- in the region. On September 26, the maritime industry tions protecting this region should be tailored to that marked the passage of World Maritime Day. It is with that uniqueness. Unfortunately, regulations resulting from context in mind that we call attention to the importance of OPA 90 have changed very little since 1990, and these improving safety and maintaining environmental protec- regulations – primarily designed for the Lower 48 – fail to tion within the maritime industry. provide adequate standards for this last maritime frontier.

Almost 30 years ago, Congress passed the Oil Pollution Act For example, OPA 90 has been interpreted by the Coast of 1990 (OPA 90), a signi? cant milestone in regulating oil Guard to allow vessel owners to propose their own alterna-

The Norwegian Coastal Administration conducts a sea trial of the Emergency Vessel Attachment and Towing System (EVATS) in March, 2019. EVATS was developed by the Network in partnership with Glosten and Samson Rope Technologies.