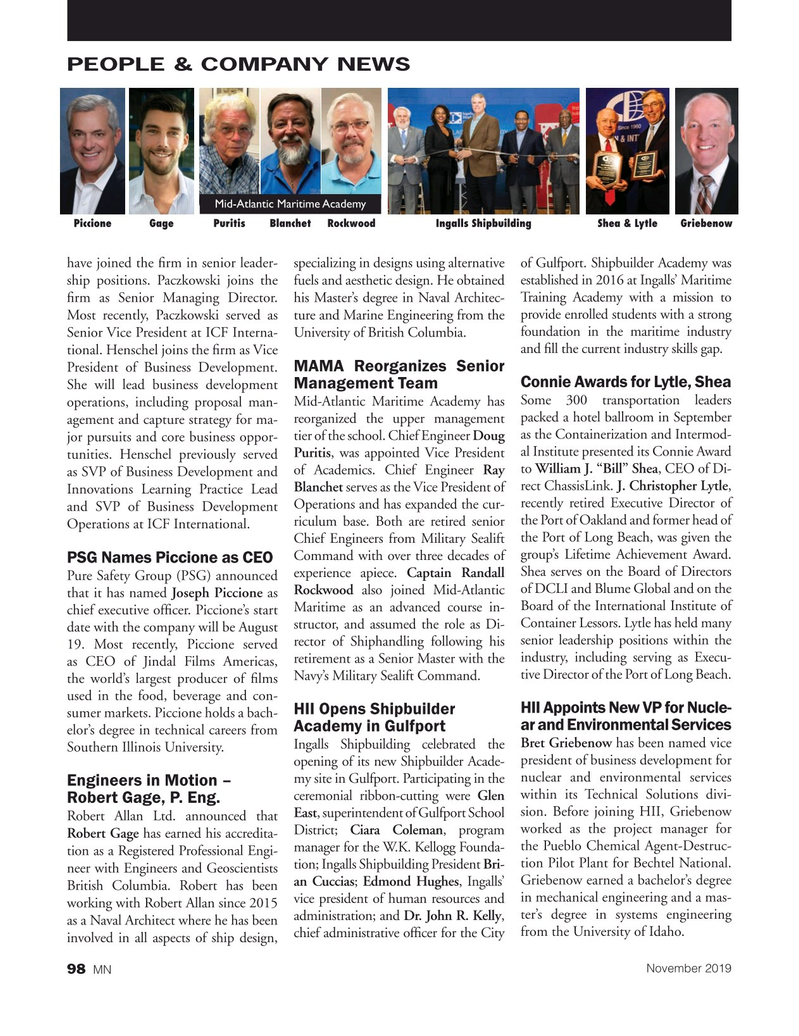 Most recently, Paczkowski served as ture and Marine Engineering from the provide enrolled students with a strong

She will lead business development

Innovations Learning Practice Lead Blanchet serves as the Vice President of rect ChassisLink. J. Christopher Lytle, and SVP of Business Development Operations and has expanded the cur- recently retired Executive Director of riculum base. Both are retired senior the Port of Oakland and former head of

Chief Engineers from Military Sealift the Port of Long Beach, was given the

Command with over three decades of group’s Lifetime Achievement Award.

Pure Safety Group (PSG) announced experience apiece. Captain Randall Shea serves on the Board of Directors that it has named Joseph Piccione as Rockwood also joined Mid-Atlantic of DCLI and Blume Global and on the chief executive of? cer. Piccione’s start Maritime as an advanced course in- Board of the International Institute of date with the company will be August structor, and assumed the role as Di- Container Lessors. Lytle has held many 19. Most recently, Piccione served rector of Shiphandling following his senior leadership positions within the as CEO of Jindal Films Americas, retirement as a Senior Master with the industry, including serving as Execu- the world’s largest producer of ? lms Navy’s Military Sealift Command. tive Director of the Port of Long Beach. used in the food, beverage and con-

Ingalls Shipbuilding celebrated the Bret Griebenow has been named vice

opening of its new Shipbuilder Acade- president of business development for my site in Gulfport. Participating in the nuclear and environmental services

District; Ciara Coleman, program worked as the project manager for

British Columbia. Robert has been an Cuccias; Edmond Hughes, Ingalls’ Griebenow earned a bachelor’s degree working with Robert Allan since 2015 vice president of human resources and in mechanical engineering and a mas- as a Naval Architect where he has been administration; and Dr. John R. Kelly, ter’s degree in systems engineering involved in all aspects of ship design, chief administrative of? cer for the City from the University of Idaho.