VT Halter’s new state-of-the-art blast and pain facility, already paying dividends for the shipyard’s bottom line and the environment alike, is poised to lift your bottom line with improved coatings and reduced corrosion.

When it comes to marine coatings, preparation is everything. If that’s the case, then Gulf Coast-based VT Halter has all the boxes checked when it come to making sure that every vessel component and exposed surface that leaves its facility is ready for whatever harsh conditions come next. That’s because, in April of 2018, VT Halter Marine unveiled a state-of-the-art blast and paint facility that today allow ship sections to be prepared, blasted and painted in a controlled environment. The new facility incorporates cutting-edge technologies into VT Halter’s marine construction programs.

Located at the northeast corner of VT Halter’s Pascagoula shipyard, the facility consists of a large 304’ x 120’ main building with adjacent spaces for blasting and painting of small parts of large ship sections with dual independent grit recovery, and cleaning processes to enable reuse of abrasive media. Able to accommodate ship sections as large as 105’ W x 80’ L x 40’ H, weighing up to 500 tons each, the facility is designed for 24/7 operation in all weather conditions and utilizes 100 percent LED lighting to reduce energy consumption and carbon footprint.

Already, the yard has blasted and coated the complete hull of a 120-foot tugboat weighing 440 tons. Another tugboat hull – with a total LOA of 135 feet – can fit in on the diagonal. In a nutshell, the blast and paint facility may well be the most cutting-edge of its kind in North America, while at the same time providing environmental protections for employees and nearby residential areas. At a time when the properties of blasting grit have become a major topic for environmentalists and regulators alike, VT Halter is leaps and bounds ahead of everyone else.

Up and Running; Already Paying Dividends
The VT Halter Marine Blast and Paint Facility went through equipment commissioning in September 2018 with BlastOne and MegaDoor put into full operation in October 2018. That’s a good thing, because the yard has secured new contracts since its opening and the facility is currently 100% booked to the end of July 2019.

Timothy Pryor, PE, is a VT Halter Marine Facilities and Structural Engineer at the Pascagoula yard. In January 2016, he took on the project. During the design and construction phase, he worked closely with equipment supplier BlastOne International as well as VT Halter Marine coatings experts Bennie Curry, Anthony Krebs, and Ron Arnold. Arnold now runs the facility.

When it was fully up and running, VT Halter Marine President and CEO Ronald Baczkowski called the new facility, “a game-changer.” Pryor agrees, explaining, “There are three aspects to the facility that Ron is referring to. Firstly, from an environmental standpoint, the facility will allow us to minimize particulate matter emission into the atmosphere during blasting or painting operations. So, that is definitely a key advantage that this facility has brought to our operations.

“Secondly, with this new facility, we are operating within a controlled environment within a sheltered space. No longer at the mercy of the weather, schedule variability is a thing of the past. This translates into less weather-related disruptions that may affect delivery schedules.

“Finally, the reduction in costs due to recycling of the grit, reduction in paint usage by eliminating almost all wind-borne overspray, and reduction in man-hours, will allow the facility a reasonable payback period.”

The facility, of course, allows VT Halter personnel to work in any and all weather, but it is more important than that. Pryor explained, “Being able to do the work in a controlled environment that is weather proof means more than just cost-savings for us. It allows us to deliver work of enhanced quality to our customers, which is really why this investment is so critical to us. For example, we no longer experience flash rusting from a sudden rain shower or from high humidity, and the paint is applied under proper humidity conditions, day and night. In the past, the difference in humidity and temperature levels had prevented us from doing paint work at night, but with this facility, we now can.  Again, that speaks to the enhanced efficiency on our part in addition to improved work quality.”

Beyond this, and because most of the coatings in use at the yard are two part epoxies, meaning cure times are chemical and not environmental, not having to re-blast due to flash rust and not delaying painting times while waiting for the humidity to improve is a huge time advantage.

With 65 blasters and painters working on a two-shift basis, the yard is certainly getting its money’s worth out of the new shop. But, that’s only half the story. VT Halter CEO Baczkowski reports manning and labor curves that produce close to 40 percent efficiencies as a function of using the facility. We asked Pryor to substantiate those claims. “When you stop losing 30% of your paint to the wind you are naturally using less man-hours. When you stop re-blasting because it rained, you reduce that re-work time by 100%. It becomes very easy to do better.”

When we suggested that 40% efficiency improvements in paint and coatings for a large hull would translate into a competitive advantage, Pryor agreed but insisted that the real advantage – at least in the eyes of the customer – rests elsewhere. “The customers that I have talked to certainly can see the natural advantage of lower costs, but what interests them most is the increase in quality from painting on a cleanly blasted unit. The facility enables us to paint better using less paint, with less chances of re-work due to weather or environmental related factors. This results in better schedule conformance and lower man-hours.”

Environmentally Friendly: two kinds of green
Even as efficiency improvements drive the bottom line for most shipyards, for VT Halter, one of the most important reasons to building this state-of-the art facility involved the protection of the environment and the surrounding communities. As the facility collects that blast material as it is used, it is also filtered and eventually recycled. Actually, the planned safeguards go much deeper.

The air that is supplied to the workers is filtered and heated or cooled as required, promoting better productivity as the environment becomes more comfortable. Beyond the air supply to the blast hall and paint booths, all workers are supplied with 4-stage filtered breathing air to their hoods that is monitored for carbon monoxide and which come with visual and audible alarms. This air supply can also be used to provide cooling under their hoods.

Elsewhere, the type of media that is being used to blast hulls is a hot topic when it comes to shipyards. A previous federal edict to change the type and origin of the blast medium to something supposedly less toxic has been delayed or pulled off the table completely. Here in Pascagoula, says Pryor, that discussion is now moot. “We have already converted to coal slag in our outdoor blast yard many years ago, so we have been very low on crystalline silica levels. The steel grit we use inside the facility is just steel, and is highly reclaimable, but cannot be used outdoors as it will rust. This steel grit is the ultimate abrasive as it has zero environmental impact and zero toxicity. Steel is the most environmentally-friendly material available. It is highly recyclable, non-toxic, and familiar to all our workers.”

All of that does come at a premium price, but the savvy boat builder can amortize those costs into savings down the road. The new (safer) blast material is more expensive because the standard blast medium is basically a waste product from the glass industry, whereas the new materials are specifically manufactured. Pryor explains, “The steel grit, while pricier, is highly engineered, and comes in a multitude of grain sizes and 6 different intensities (hardness). You can tailor your abrasive to your product and work environment. In addition, you can reuse it 300 to 1, 000 times and it is self-exclusionary as it gets filtered out in the dust collectors when it gets too small. These are long term advantages to our environment which cannot be traded off with the cost of the raw materials.”

Coatings: 99% Preparation; 1% Paint
If, as many shipbuilding stakeholder claim, coatings are one of the most important, but sometimes most underappreciated aspects of shipbuilding, it is also true that a quality coating job (should) involve 99% preparation and 1% paint. Assuming that to be the case, the new blast and paint facility provides VT Halter with a remarkable advantage over yards not so equipped. “It is true that this facility provides an advantage for us,” insists Pryor, adding, “The preparation for that, including rounded edges, prefabrication primer, post fabrication blasting, and multi-stage painting with inspections required at every level could not be done in the former environment we had. Our ability to apply the final coating without having to go back and do re-work only leads to higher quality.”

All that said, every coating assignment is different, and a paint representative associated with the coating supplier is always on site, independent of the yard, advising on procedures and then monitoring to make sure it gets done right. According to Pryor, the paint system itself is almost always customer specified to match performance with their own fleet.

Benchmarking the Dividends
Beyond the obvious environmental and efficiency gains, VT Halter Marine eventually intends to benchmark the quality of its finished coatings against that which came before. Especially important in an industry where corrosion and maintenance costs can be prohibitive, the real test will be the comparison of the warranty costs associated to paint failures and doing a comparison with projects completed prior to Fall 2018. Tim Pryor, however, readily admits, “Of course, that measurement will not be available until some years down the road.”

It’s a tightly competitive shipbuilding market out there. For its part, VT Halter Marine designs, builds and repairs a wide variety of ocean-going vessels such as patrol vessels, oil recovery vessels, oil cargo vessels, ferries, logistic support vessels and survey vessels. Those projects all require quality coatings as the finishing touch. Arguably, that makes all the difference – and VT Halter Marine knows it. It turns out that, when it comes to marine coatings, green IS the best color. 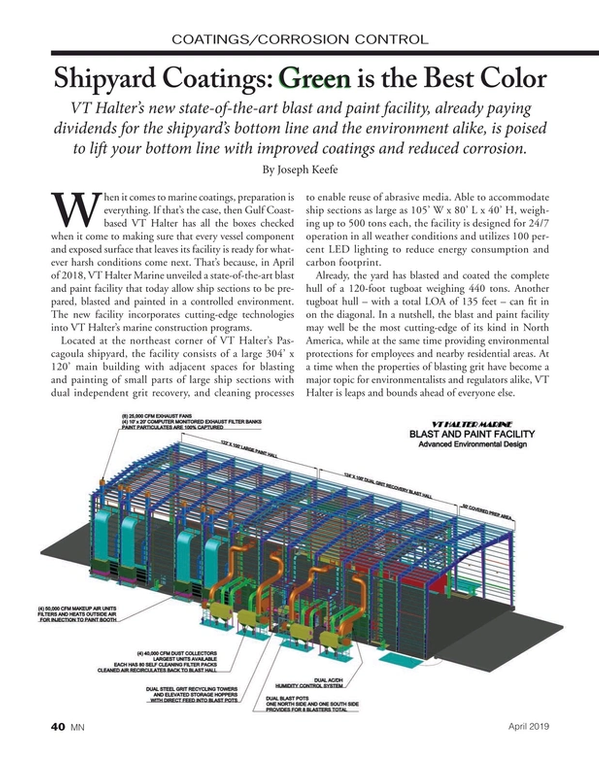