BY THE NUMBERS: Replace your Workboat Engine (now)

It turns out that commercial workboat engines are staying in service more than two times longer than predicted by the U.S. Environmental Protection Agency (EPA), according new research from the Diesel Technology Forum (DTF) and Environmental Defense Fund (EDF). That says a lot for the quality of marine engines, but at the same it isn’t necessarily a good thing. But, the news provides clues to a new path for clean air improvements in large port cities.

Separately, the U.S. Army Corps of Engineers estimates that, as of 2014, there were approximately 9,000 Category 1 and 2 marine vessels operating on U.S. waters. The Category 2 workboats highlighted in the DTF and EDF report have displacements of 7 to 30 liters per cylinder and are installed primarily in larger pushboats, towboats or offshore support vessels.

But, the DTF underscores the reality that more, older engines remain in service today. Since real-world workboat engines are operating with longer lifespans, the actual nitrogen oxide emission reductions are 52 percent weaker than predicted in EPA’s 2008 Rule calculations.

The EPA estimates that, as of 2014, 81 percent of Category 1 and 2 workboats used older, uncontrolled or Tier 1 diesel engines, which are 10 times higher in emissions than a modern Tier 4 diesel engine. The slow turnover rate of these technologies means communities will only see nitrogen oxide (NOx) reductions of 161,167 tons per year, well below the 333,925-ton reduction predicted in the EPA 2008 Rule. Similarly, fine particulate emissions will only be reduced by 3,537 tons per year, instead of by 8,758 tons per year.

Starting in 2015, new diesel engines used in marine applications in the United States were required to meet Tier 4 emissions standards. Relative to previous generations of technology, these latest clean diesel technologies are proven to dramatically reduce emissions, including nitrogen oxides and fine particulates, by 88 percent to 95 percent compared to previous generations. Despite the widespread availability of the new, cleaner diesel engines for workboats, the cost and downtime required to upgrade and other factors have likely delayed investments in the newest technologies.

Hence, if the rate of turnover to the newest generation of diesel technologies can be accelerated, near-port communities stand to reap significant air quality benefits. EDF calls it ‘low hanging fruit.’ For example, if all existing Category 2 vessels serving the New York Harbor upgraded to the newest diesel engines, emissions in the New York metropolitan area would be cut by more than 8 tons of nitrogen oxides per day. In the Port of Houston and Galveston, more than 4 tons of nitrogen oxides reductions per day could be realized for the Houston metropolitan area.

The opportunity to immediately replace old work boat engines with new ones already exists; using funds from Volkswagen’s $2.9 billion environmental mitigation trust for marine repower projects. And, previous DTF/EDF studies confirm that upgrading workboats to the newest-model clean diesel engines delivers the greatest emissions improvements for the lowest cost. For example, on average, upgrading the engines of a single tugboat to the newest diesel technologies eliminates 14.9 tons of nitrogen oxide emissions per year for only $4,379 per ton of nitrogen oxide eliminated. Other types of nitrogen oxide-reduction projects can cost more than $30,000 per ton of nitrogen oxide.

In a nutshell, the Diesel Technology Forum and the Environmental Defense Fund undertook this analysis to better understand the potential opportunity the Volkswagen $2.9 billion Environmental Mitigation Trust could have on reducing diesel emissions from older marine workboats and switcher locomotives.

States, as beneficiaries of the Trust, maintain an account with the Trust and the amount therein is determined by the population of passenger vehicles found to have been outfitted with technology to sidestep emission requirements. The Trust allows for the replacement or repower of heavy-duty equipment which are the largest contributors to NOx emissions. Repowering large applications, including switch locomotives and marine workboats, is an eligible category of funding through the Trust.

These workboats and switch locomotives operate at marine ports located in or adjacent to major cities and contribute to hazardous smog pollution. Replacing these older engines with new clean diesel models can have an immediate and significant beneficial impact in reducing emissions for sensitive communities. Relative to previous generations of technology, the latest clean diesel technologies can reduce emissions, including NOx and fine particle emissions, by 88 percent to 95 percent. While the latest clean diesel technologies are ready and available to reduce emissions, the EPA estimates that by 2020, unless additional action is taken, only 5 percent of the switch locomotive and 3 percent of the marine workboat fleets will be powered by these clean technologies. 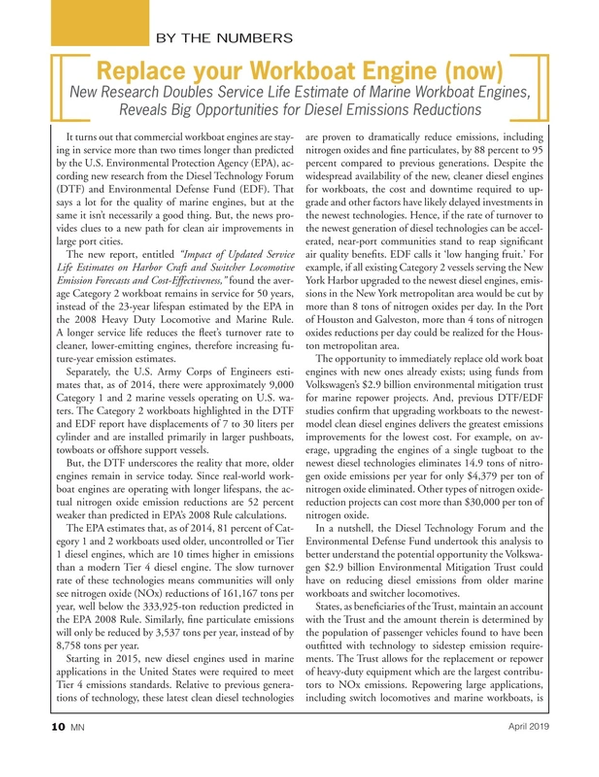 Read BY THE NUMBERS: Replace your Workboat Engine (now) in Pdf, Flash or Html5 edition of April 2019 Marine News